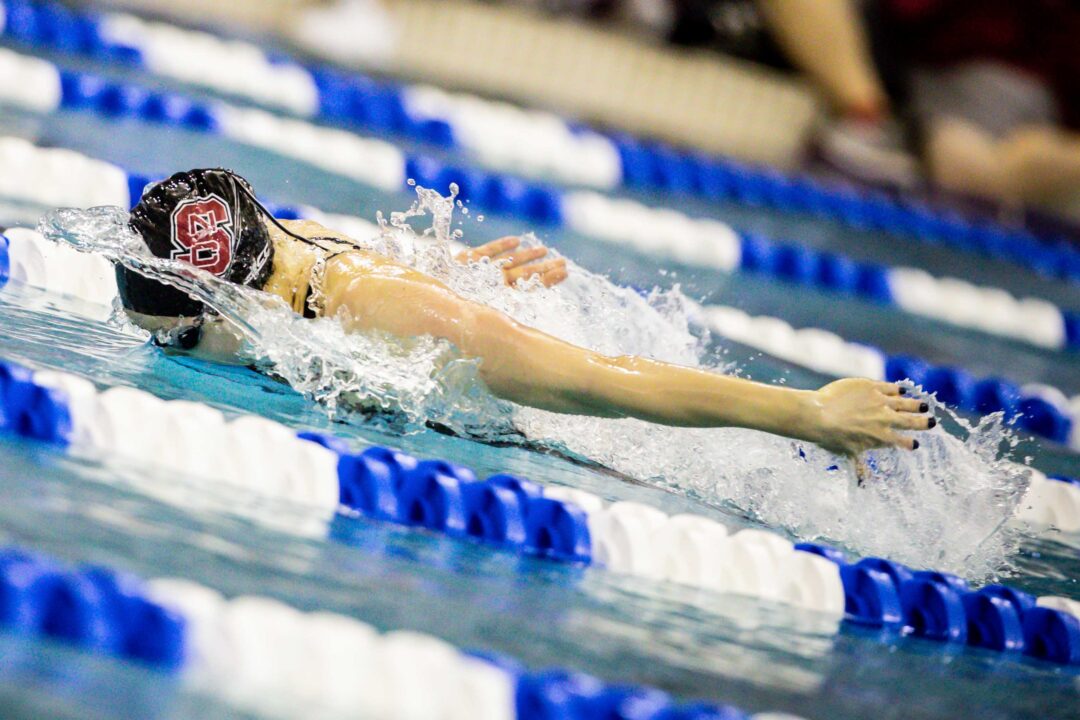 Wolfpack swimmers won a majority of the events on the first day in Cary, but top recruits Charlotte Hook and Baylor Nelson earned wins too. Archive photo via Jack Spitser/Spitser Photography

Some of the top club and college teams in the nation are competing this week at the Cary site of the Speedo Sectionals meets, and a few big names led the way with victories and/or new best times on the first night of competition.

NC State has a strong contingent swimming in Cary this week, and the Wolfpack took five of the eight individual events on the opening day.

While it didn’t have quite the same level of drama due to its shorter distance, the 50 free was even closer at the touch. UNC’s Grace Countie got her hand on the wall just ahead of NC State’s Kylee Alons, 25.34 to 25.37. Countie took 3rd in this race in February’s finishing ahead of both Alons and another NC Star star, Katharine Berkoff, who finished 3rd tonight in 25.69. Led by Alons, and Berkoff NC State women took the #2-5 and #8 spots in the race here.

The men’s 50 free was also Wolfpack heavy, and Noah Henderson led the way with a 22.38. That’s a new best by 0.28s for Henderson, and it is almost exactly half a second faster than the 22.87 he swam in prelims at the US International Trials, which tied him for 20th. NC State had a total of five current or former swimmers in the A-final, including alumnus Coleman Stewart, who placed 7th in 23.71.

NC State’s Noah Bowers won the 200 fly with a new lifetime best of 1:57.89. That moves him into the top 20 in the nation this season, and also takes over a second off of his previous best time of 1:59.18, set back in 2019. Back during the college season, Bowers took 4th in the yards version of this event at the 2022 ACC Championships.

Yara Hierath also put a tally in the NC State win column with a 8:49.23 win in the women’s 800 free. The Wolfpack swept the event, as James Plage won the men’s event by nearly 15 seconds. His time of 7:54.77 was a new personal best by a little over two seconds.

SwimMAC’s Baylor Nelson, one of the top swimmers in the high school class of 2022 and a Texas A&M recruit, won the 200 IM by over two seconds with a 2:00.63. That’s less than a second shy of his lifetime best of 1:59.86, set last December at the US Open. We ranked both Hook and Nelson as the #2 recruits in the class of 2022 when we last ranked these classes last summer.