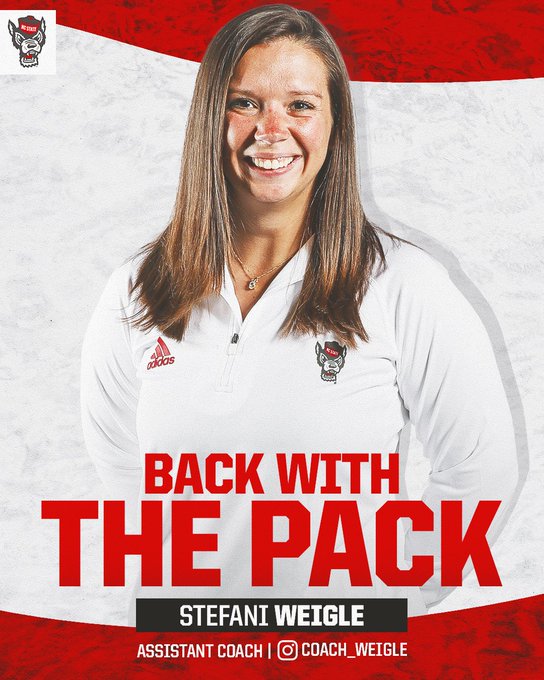 Weigle moves into the assistant role after spending the 2021-22 campaign as a volunteer assistant coach for both the men's and women's programs. Current photo via @packswimdive/Twitter

The NC State swimming and diving program announced the promotion of Stefani Weigle to assistant coach on Tuesday, as she moves up the ladder after serving one season as a volunteer assistant with the Wolfpack.

NC State head coach Braden Holloway said that immediately upon her arrival last fall, Weigle was clearly a good fit with the program.

“We are super excited to promote Stef to full-time assistant coach,” said Holloway. “Within the first month of her arrival at NC State, I knew she was going to be a great fit for our student-athletes, our staff and our program’s culture. Her hard work, dedication to our student-athletes’ welfare and eagerness to learn did not go unnoticed.

“Stef has impressed me with her character, willingness to go the extra mile and her desire to make a positive impact on our program’s development, growth and vision. Our student-athletes have connected with her more and more each day, and she is the perfect fit to who we are as a program and as a family.”

During her one season in Raleigh, Weigle helped propel the NC State men to win the 2022 ACC team title, while both the men’s and women’s teams matched their program-best finishes at NCAAs. The men’s team placed fourth and the women took fifth, making the Wolfpack one of two schools to put both programs in the top five (joining Texas).

“I am very excited to be joining this team,” said Weigle. “It is awe-inspiring to be surrounded by these highly-motivated student-athletes. They motivate me to work harder every single day, and I know that we can get this done together. There is absolutely nowhere else I would rather be, and I am blessed to have found my home with NC State swimming and diving.”

Weigle appears to be taking the position previously held by Rebecca Westfall, who came in as an assistant coach prior to the 2021-22 season. Westfall is no longer listed on NC State’s coaching staff on the Pack website.

Prior to joining NC State, Weigle spent time as an assistant coach at Grove City College and Washington & Jefferson College.

Weigle, a Grove City graduate in 2017, helped her alma mater win the 2020 Presidents’ Athletic Conference titles for both men and women.

During her time as a student-athlete, Weigle was a member of four consecutive conference titles for Grove City (2014-17), including co-captaining the 2016-17 squad.

The PACK versus WAHOO gibber jabber is SO boring!

So who is going to point out NC State’s track record with their female assistants?

Maybe they didn’t see the Masiuk.official Instagram site with his post?? Though domestic recruits typically send their own commitment stuff, I’m guessing international swimmers may not known the SwimSwam ‘protocol’.

I wonder who the new volunteer assistant is! Could it possibly be someone who was disrespected and not valued from a school down the road?

And was already announced as the new volunteer assistant last week?

Don’t talk about what you don’t know