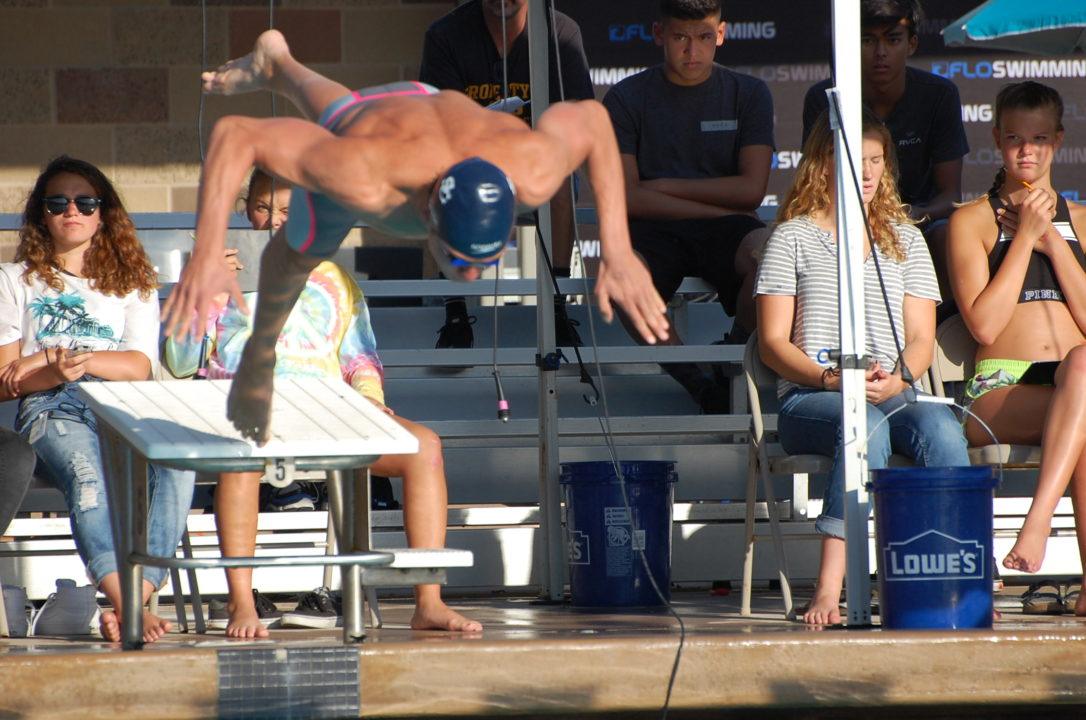 Just a day after sweeping the sprint titles at the 2017 CIF Southern Section Division 3 Championships, Sierra Canyon’s Nate Biondi was putting up fast times in the long course pool. Golden West Swim Club, the site of the championships, hosted a long course meet to give wimmers a chance to put up some times in the meters pool after the CIF meet.

One of the highlights from the women came from National Junior Teamer Taylor Ault in the 400 free. Ault was the only woman in the field to put up a sub-4:20 time. She hit the wall in 4:17.51, finishing 8 seconds ahead of Kathleen Sulkevich (4:25.65).

This guy is dropping chunks of time. Very bright future!

I wish him the best, and a bright future, but with Coley gone don’t expect big improvements. We’ve seen this pattern with all Coley’s swimmers from the teams that he coached. Once he moved on to another team, those kids left behind will not perform at the same level. His training is unique and the improvements are spectacular. Just watch Indiana’s next year performance… Again, I don’t want to take away any of Nate’s accomplishments! Great job!

I think what you have is a naturally talented swimmer, who didn’t really get started until he was already in high school. Not to take anything away from any coach, but a Golden Retriever with a clip board and whistle could have taken an athletic kid like Nate from where he was about 3-4 years ago and gotten him much faster.

What happens now will certainly fall on Nate’s continued willingness to train hard at Cal, and a certain amount of good fortune for exactly how fast he can get.

Question…How many of Coley’s elite swimmers were female and how many male? It’s way more common for elite female swimmers to struggle in college than male swimmers.

At that pace he breaks Walters’ stupid 100 free American record in the next 2 years. 🙂

New drinking game. Take a shot every time Bobo mentions Walter’s ‘stupid’ record. Two shots whenever they question why anyone wants to see Dressel swim anything other than 50/100 free. 5 shots whenever a yards pool is referred to as a bathtub.

I want dressel to swim the 200im, I bet he could break the NCAA record in a bathtub!

No thanks. I don’t wanna die

Walters was a great swimmer. Give it a break.

Matt Biondi’s 48.4 would have medaled as recently as 2004. It has to be one of the most ahead-of-its-time freestyle performances ever. Only a few other races of the same calibur come to mind immediately:

I was purposefully limiting to freestyle swims, but totally agree! That is the Bob Beamon performance of swimming (and even better since Mary T wasn’t a flash in the pan)

Her stroke was so beautiful and economical. Gotta love this high elbow catch:

Matt Biondi split a 47 from a flying start. in 1986(?) at that year’s PanPacs. It was in Tokyo, I think. You kids 😉 have no idea what it was like hearing about that swim in the pre-internet days! I couldn’t believe it!!

Forgetting the backstroke queen egerszegi 2:06:62? This time would medal in all games after her retirement right?

I was limiting to freestyle on purpose, but totally agree.