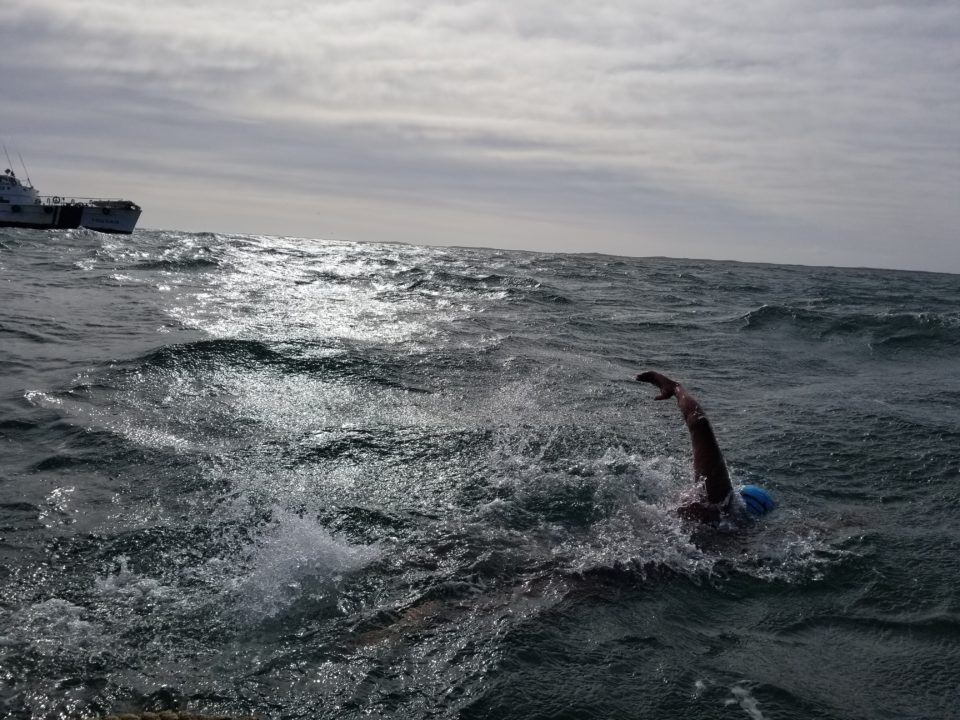 Read the message FAST coach Jon Urbanchek wrote on the board the morning he learned about Fran Crippen’s passing.

Those are the words of 47-year-old Madhu Nagaraja, who successfully swam the Strait of Magellan on November 29th.

The swim, first completed by Lynne Cox in 1976, spans the route between the Atlantic and Pacific Oceans, and is known for its extreme conditions. Nagaraja is originally from India, and currently resides in Oakville, Canada, making him both the first Indian and the first Canadian to complete the swim. He is the 23rd person ever to do it.

Nagaraja swam through his age group and college years in India, and cites the 200 IM as his specialty. “I never thought I would be a distance swimmer,” he told SwimSwam, and joked: “If you hang out with the wrong people, this is what happens.”

In May of 2003, Nagaraja completed his first open-water race — only a 1-miler —  but quickly worked his way up a 2 mile swim in Northern California’s serene Lake Berryessa, then within another year had swum the English Channel.

“I pick swims that I find kind of scary, that I can’t visualize.”

“I don’t do a lot of swims, just because of everything that happens in my life,” he said. However, he is deliberate in the few he chooses to do: “I pick swims that I find kind of scary, that I can’t visualize.”

The Strait, which is 2.4 miles wide at its narrowest, lies near the southernmost tip of South America, separating the mainland to the north from Tierra del Fuego to the south. It is named for Portuguese navigator Ferdinand Magellan. “I had read about him back in primary school in India,” Nagaraja explained. “I still remember the page of the textbook about his first circumnavigational achievement. That had always stuck in my head.”

Lucky for him, Lynne Cox is a close family friend. The two met at signing for her book, Swimming to Antarctica, in Santa Cruz, CA, in 2005. Cox recognized Nagaraja because of a mutual friend.

She since has visited the Nagaraja family in Toronto, and Madhu cites her as a major supporting factor in his success: “She has helped me a great deal in terms of getting my head into the right place when it comes to swims like this.”

Nagaraja first attempted to swim the Strait in 2015, but was pulled out after two hours in the water due to the cold temperature. This year, the attempt got off to a foreboding start: in Punta Arenas, Chile, the week prior, the wind was so strong that it uprooted a tree near Nagaraja’s training site.

The day before the endeavor, the crew was told that the conditions would likely not be conducive to completing the swim, but that there might be a tiny window in which Nagaraja could try.

In the end, it all came down to that window. “I was told ‘we have to go right now,’ which literally meant I had less than a minute to situate my cap, goggles, and earplugs, then jump,” he said.

An hour and 19 minutes later, he emerged triumphant.

“It was 100 percent a mental swim for me,” he said. “I focused on my family — my wife and two kids.” The lowest wind velocity at any point was 26 knots, or approximately 30 miles per hour. Nagaraja said he swam through 2-meter waves.

“Being the first Indian and first Canadian is a really great feeling. But what it also means is that if I can do it, anyone who wants to can do it.”

As for what’s next in his open-water career, Nagaraja is lying low until the feeling strikes again.

“My focus will be my family until something scary comes into my irrational head.”

Nagaraja is the co-founder, along with fellow marathon swimmer Loren King, of the Great Lakes Trust, an organization which helps to protect and clean up the Great Lakes.

Magnificient achievement Madhu! So happy for you

Amazing Madhu,proud of your ignited passion to go beyond your confort zone & you keep testing waters for the gen next!?

Great swim, rather, incredible swim. Love open water swimming but I get motion sickness swimming in a pool if I breathe every stroke. Can’t imagine swimming through 6 foot swells.