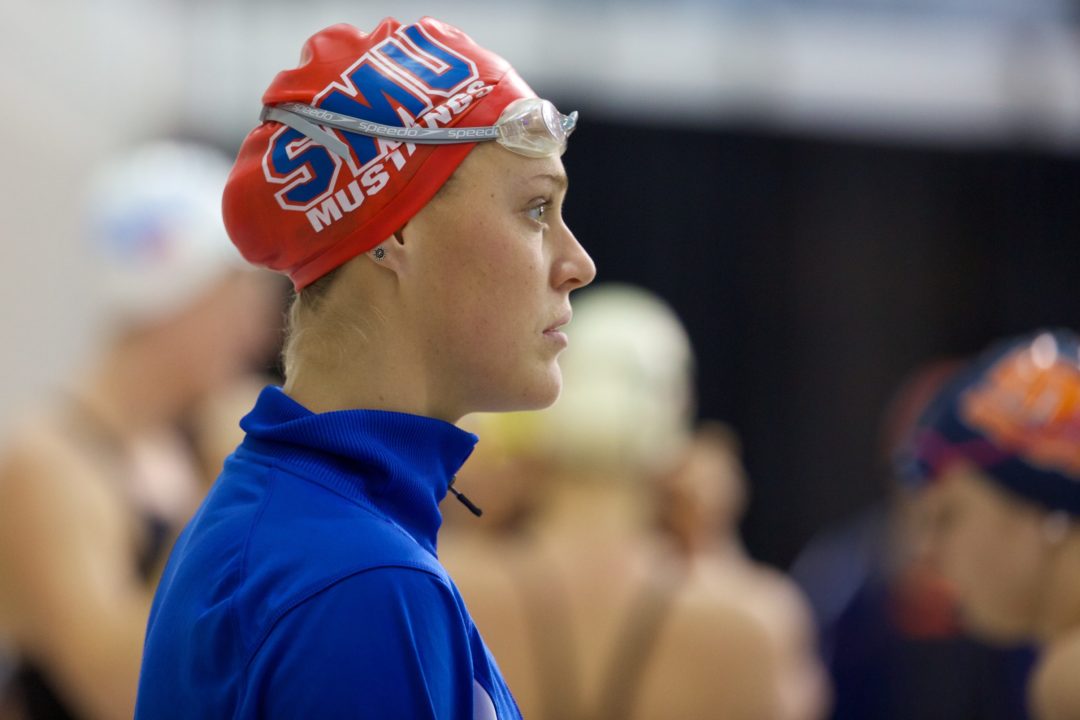 Mustang Swimmers & Divers Set To Host Texas A&M: SMU gets its full team back together for just the third... Current photo via Rafael Domeyko, rafaeldomeyko.com

Mustang Swimmers & Divers Set To Host Texas A&M:
SMU gets its full team back together for just the third time since November when the Mustangs host Texas A&M in Perkins Natatorium on Jan. 24 at 7 p.m. Last season SMU traveled to College Station where the Mustangs fell to the Aggies, 142-92. In the dual meet, SMU was led by now junior diver Devin Burnett as he earned first place in the 3-meter dive. For the swimmers, now seniors Nicolai Hansen and Julian Fletcher paced the Mustangs as Hansen took first in the 200-yard breaststroke with a time of 2:00.80 and Fletcher took second with a time of 2:05.54. The Ponies will look to avenge last season’s loss as they host their final event of the season in the Perkins Natatorium.

Senior Recognition Night at SMU:
Prior to the meet, head coach Eddie Sinnott and the SMU men’s swimming and diving team will recognize seniors Giedrius Andriunaitis, Julian Fletcher, Nicolai Hansen, Ryan Koops, Ramom Melo, Matthew Napier-Jameson, Braeden Newton, Matt Roney and Nelson Turk for their outstanding efforts inside and out of the pool. SMU would like to congratulate all of them on their accomplishments and wish them luck in all their future endeavors.

Looking Ahead:
Following the dual meet with Texas A&M, the Mustangs will be idle until the inaugural American Athletic Conference Championships where the Mustangs are aiming for their 17th conference championship in the last 18 years. The American Championships are from Feb. 19-22 in Louisville, Ky.

Looking Back:
Junior diver Devin Burnett placed first (393.55) in the 1-meter and 3-meter (371.70) dives and was named the Most Valuable Diver of the meet as the SMU men’s swimming and diving team placed sixth at the 30th annual Classic at SMU.

Regarding the relays, SMU has four relay teams ranked second in The American beginning with Ziga Cerkovnik, Matt Roney,Ryan Koops and Hansen in the 200-yard freestyle relay as they posted a time of 1:21.42. In the 200-yard medley relay, Matas Andriekus, Matthew Napier-Jameson, Cerkovnik and Koops recorded a time of 1:30.45 and in the 400-yard medley relay the group of Cerkovnik, Andriekus, Napier-Jameson and Koops have clocked a time of 3:19.03. Each of these three times was recorded at the 30th annual Classic at SMU. In the 400-yard freestyle relay, Ramom Melo, Giedrius Andriunaitis, Koops and Roney recorded a time of 3:00.83 at the Texas A&M Invitational.

SMU Drops Dual Meet At LSU:
Junior diver Devin Burnett finished first in both the 1 and 3-meter dives as he posted scores of 359.55 and 397.50, respectively, as the SMU men’s swimming and diving team fell to LSU, 185-112 in SMU’s second dual meet of the season. Freshman Ziga Cerkovnik made his collegiate debut today and placed first in the 50-yard freestyle (20.59) and second in the 100-yard butterfly (49.88). In relays, the Ponies won the 400-yard freestyle relay as the team of seniors Matt Roney, Ryan Koops, junior Giedrius Andriunaitis and Cerkovnik placed first with a time of 3:05.15. Individually, Roney finished runner-up in both the 100-yard and 200-yard freestyle races with times of 46.40 and 1:40.3, respectively. In the 200-yard breaststroke and 200-yard individual medley, senior Nicolai Hansen placed runner-up in both with times of 2:04.34 and 1:52.93, respectively. Hansen also finished third in the 100-yard breaststroke in 56.54.

SMU Places Fifth At Texas A&M Invitational:
The Mustangs men’s swimming and diving team placed fifth of six schools at the Texas A&M Invitational back in late November. SMU was led by diver Devin Burnett as he won the platform dive with a score of 393.55, finished third (371.4) in the 1-meter dive and placed sixth in the 3-meter dive with a score of 380.5. In addition for the Mustang divers, Bryce Klein placed seventh in the 1-meter dive (310.8) and ninth (322.8) in the 3-meter dive as he competed in the first two events of his collegiate career.

SMU Falls To TCU In Season Opener:
Divers Devin Burnett and Hayden Hodges finished first and second in the 1-meter and 3-meter dives, respectively, as the SMU men’s swimming and diving team opened its season by falling at TCU, 177.5-122.5. In addition to Burnett, SMU placed first in three other races. The Ponies won the 400-yard freestyle relay as the team of Matt Roney, Ramom Melo and Ryan Koops andJustin Gibson finished with a time of 3:04.28.