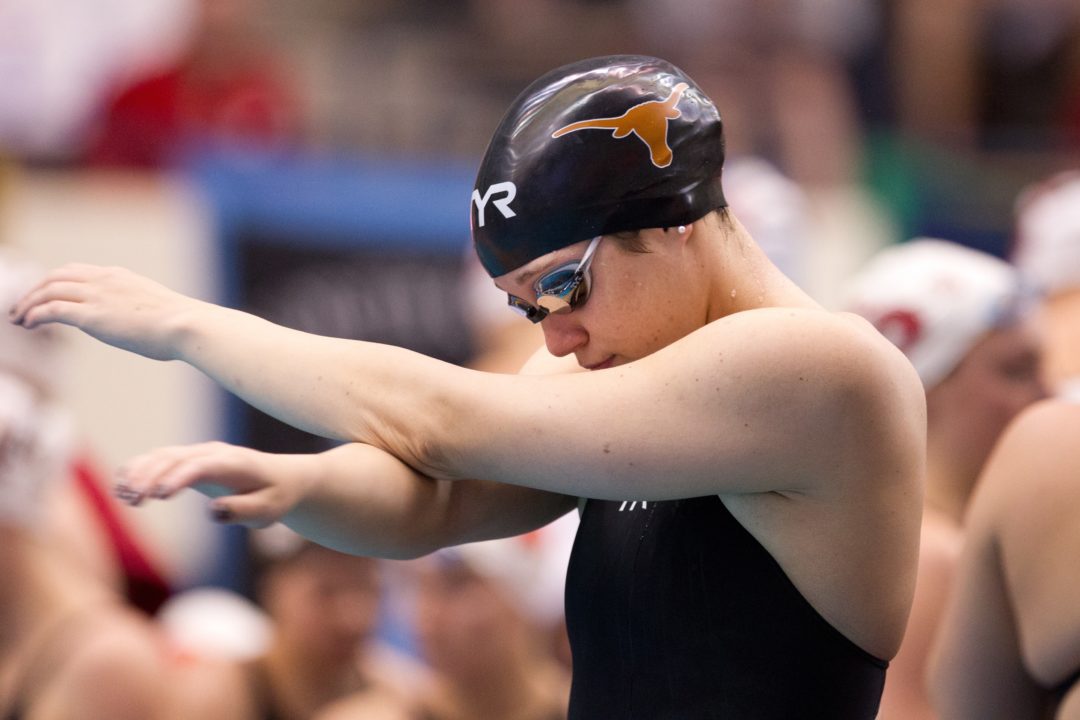 Lily Moldenhauer was one of three Longhorns to earn weekly honors after a pair of dual meets with Auburn and Georgia. Archive photo via Tim Binning/TheSwimPictures.com

The Texas Longhorns took home weekly awards in three of four categories after big wins over Auburn (men and women) and Georgia (men) and a narrow loss to Georgia for the women.

Meanwhile diver Maren Taylor was honored as Women’s Diver of the Week, her second consecutive weekly award. Taylor, also a senior, picked up a 3-meter win against Auburn along with a second-place showing on 1-meter. Facing Georgia a few days later, Taylor hung tough against Bulldog All-American Laura Ryan, taking second on both boards.

Freshman Michael Hixon was named Men’s Diver of the Week by winning all but one of his diving events during the busy dual schedule. Hixon swept the boards against Georgia, and also added a 3-meter win against Auburn and contributed to a 1-2-3 Texas finish on 1-meter.

Breaking up the Texas weekly awards party was West Virginia senior Bryce Bohman. Bohman put up five individual wins over the course of two meets, finishing a close second in his sixth race. Bohman won the 100 back, 200 back and 100 fly against Pitt, also leading off a winning 200 medley relay. Then Bohman went after TCU, winning the 100 back and 100 fly (and  putting up 48s in both) and leading off another winning medley relay while taking second in the 200 back.