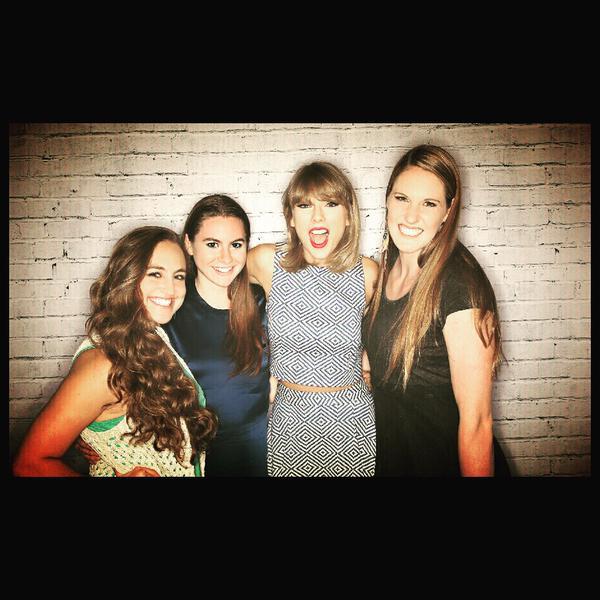 Olympic swimmer and Missy Franklin got to meet pop star Taylor Swift over the weekend. Or Swift got to meet Franklin. It goes both ways with these pop culture icons, who are both big fans of each other. Current photo via @MissyFranklin on Twitter

It was a case of fan-meets-celebrity – except both celebrities are also fans.

Olympic swimmer and  Missy Franklin got to meet pop star Taylor Swift over the weekend. Or Swift got to meet Franklin. It goes both ways with these pop culture icons, who are both big fans of each other.

Franklin and several of her cousins got to check out the Denver stop of Swift’s “1989” tour, seeing the hit musician in action. And the world record-holder and her family also got to meet Swift herself, tweeting this picture of the bunch:

Swift looks equally star-struck, and for good reason. Back in 2012, Swift gave Franklin a public shout-out on Twitter as Franklin was tearing up the London Olympics to the tune of 4 gold medals (and perhaps to the tune of “We Are Never Ever Getting Back Together,” which would jump to #1 on the Billboard charts a few weeks after the London Games).

Then, a fan-girling Swift expressed her excitement over Franklin’s swimming:

So blown away by @FranklinMissy! I was so happy to see you win, girl 🙂

To which a star-struck Franklin responded in kind:

@taylorswift13 that means more than I can say! Thank you so so much! I don't even know what to say!!:)

Swimming fans (who are so obsessed with making “Shake it Off” videos that one SwimSwam writer actually had to have “resident Taylor Swift exper/beat writer” added to his job description) are likely thrilled with a Missy-TSwift pairing, and it’s all but certain regular commenter Bobo Gigi finds this celebrity friendship better suited than the longtime Missy Franklin-Justin Bieber connection.

The next day, Franklin stopped by the Colorado Rockies game to make an appearance on-air with the local color commentary crew. You can check out a video of that embedded in this ESPN piece.

Most notable? Franklin says she got about 2 hours of sleep after the Taylor Swift concert, followed immediately by a morning swim practice, also 2 hours. The commentators seem a bit incredulous about the idea of training as much as one sleeps, but for Franklin, like most swimmers, it’s about par for the course.

Bobo – love your comments on this site and passion for the sport of swimming. It’s just not the same when I read your comments on other subjects. Focus on swimming, who knows, someday you may be just as famous and legendary as Franklin and Swift :)!

Taylor swifts music isn’t bad. Although it has to do with personal taste. She started out with country music but is now in the pop genre. I also like coldplay, Nora Jones and alicia keys. Pink,s vocals are very unique and powerful. Taylor swift doesn’t have powerful vocals like pink but she has a sweet quality to her voice and her lyrics are usually like poetry. Taylor swift also has a pretty great personality. She hasn’t let wealth and fame get into her head unlike the likes of Justin bieber and Miley cyrus. Taylor swift strikes you as the next door southern girl.

Bobo, surprised and pleased to see Eva Cassidy on your list of faves! I only have her “Songbird” cd, but I love listening to her voice, especially on “Wade in the Water”.

Now hold on there, Bobo!!! I never pegged you for a hater! How can you say those things about Taylor Swift?! Sure, her recent music is in the “pop” genre, but, “…pure commercial false music only built for radios with always the same process to rip off naive young people?” That’s a bit harsh! Clearly her style is not what you like, but that doesn’t mean it is without merit! 🙁

Personally, she’s one of my favorite singer/songwriters, and I’m jealous that Missy was able to meet her!

I’m on Team DanJohnRob on this one. Sorry Bobo 🙂

What is my name doing here? 😯

Swift is not very famous in France.
Honestly Jared, that’s still better than Bieber. But it’s not hard to do better. 😆
But it’s still pure commercial false music only built for radios with always the same process to rip off naive young people.
And in 20 years we will obviously not remember the names of Bieber, Rihanna or Swift anymore. They will disappear from music history like at least 98% of the things the musical industry produces in that world for 15 years.
Personally, my favorite artists in the last 15 years are more people like Ben Harper (especially with the Innocent Criminals), Coldplay (especially Viva La Vida… Read more »

Glad to see my girlfriends getting along :’)