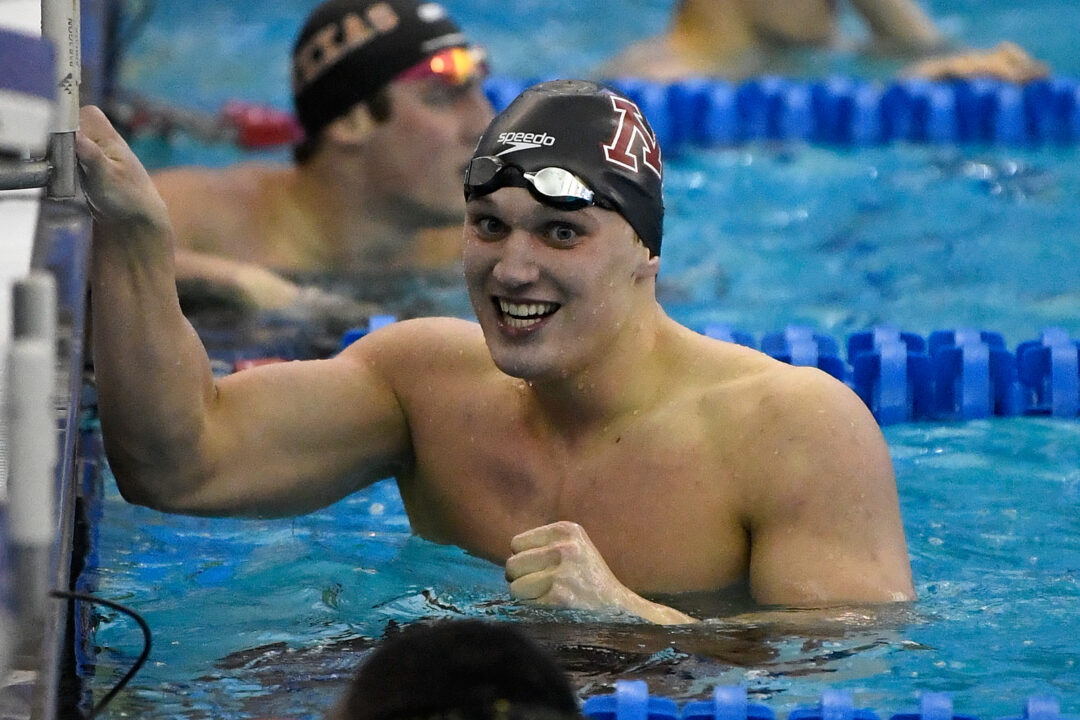 Minnesota swept St. Thomas as the Tommies competed in their first meet against a Big Ten team since joining the Division I program. Stock photo via Photo by Mike Comer/NCAA Photos via Getty Image

In the Minnesota men’s home opener, the Gophers swept the only other DI Minnesota team, St. Thomas, by over 145 points each. Minnesota won the top two spots in each event up until it began exhibitioning swimmers at the 500 free, though it was St. Thomas’ first meet against a Big Ten school since it transitioned from DIII to DI at the beginning of the 2021-22 season. Previously, St. Thomas won its opener against Augustana for both men and women, and the women won against UW-Green Bay while the men lost.

The Gophers used this meet to put swimmers in off events, including breaststroker and senior Max McHugh in freestyle, butterflier Kaiser Neverman in freestyle, and distance freestyler Chris Nagy in butterfly.

Sophomore Neverman defeated his senior teammate McHugh to win the 50 in 20.89. Neverman placed second in his second individual event, the 200 breaststroke, behind freshman Josh Johnston’s 2:06.54.

Minnesota’s senior team captain may have led the way in number of event wins, but the entire team had an opportunity to contribute to the Gophers’ total point count. Standout freshman Bar Soloveychik won both the 1000 (9:23.56) and the 100 (46.57). Soloveychik made his collegiate debut against Purdue earlier in October, when he won the 200 and 500 freestyle. On Saturday, he pushed his freestyle versatility even further, moving away from mid-distance to sprint and distance events. The Israeli swimmer, who broke the 400 and 800 freestyle Israeli records earlier in 2021, seems to fit wherever the coaches want him to go, at least based on these first two meets of the season.

Alex Foti led the way for the Tommies, placing second in the 500 free with a time of 4:45.24. The freshman has had a spectacular start to his rookie season, breaking the 1000 school record at this very first meet and continuing the trend with the 500 against Minnesota. He’s already been named the Summit League Men’s Swimmer of the Week in mid-October for his rapid improvement.

Junior Will Goldman also got a season best in the 100 breast (59.21). Goldman had won the 100 breast when the Tommies took on Augustana at the beginning of October. He placed third at this meet, behind two Minnesota swimmers.

The Minnesota women swam the meet just one day off their dual meet against Big Ten opponent Nebraska. Freshman Hannah Cornish, who had a standout meet against the Nebraska women, continued her successful weekend by winning three events.

Senior Gopher Bloomer also swam instead of Cornish in the 100, winning the event in 51.97 but not beating Cornish’s 50.56 from Friday. Cornish’s performances from earlier in the weekend illustrate the strength of Minnesota’s recruiting class.

Another Minnesota freshman, Summer West, got her first win of the season in the 1000 freestyle with a time of 10:30.04. West committed to a storied distance program, but one that has thinned out in recent years. At the 2021 Big Ten Championships, Minnesota only earned 17 points in the 500 and 1650 free, one of their lowest-scoring areas. Senior Abbey Kilgallon and freshman Eliot Kennedy both swam faster times in the 1000 against Nebraska, but West still performed better than some more veteran Gophers.

Finally, Megan Van Berkom took home first in the 100 fly (55.01), just one day after swimming a lifetime best in the 200 fly and earning an NCAA B cut, the number-one ranked time in the Big Ten this season.

In the 200 breaststroke, sisters and opponents Grace Urkiel and Molly Urkiel raced against each other. Grace swims for St. Thomas, and Molly swims for Minnesota. In the end, Molly finished ahead of Grace, swimming 2:22.12 to her sister’s 2:28.35. Both are sophomores.

St. Thomas returns to the pool Nov. 5 at the USD Coyote Extravaganza meet. Minnesota will host Wisconsin on Nov. 5 at its annual “Pack the Pool” meet.

This image kinda haunts me

Thought it said Mcugh went 50.6 and had a heart attack

You’re absolutely right, and he’s slower than their 1000 free record too. It seems like Swimswam might be mixing up the University of St. Thomas (Saint Paul, MN) and St. Thomas University (Miami, FL). Foti is just under the school records for Miami, so it would make sense. Phenomenal swims regardless!