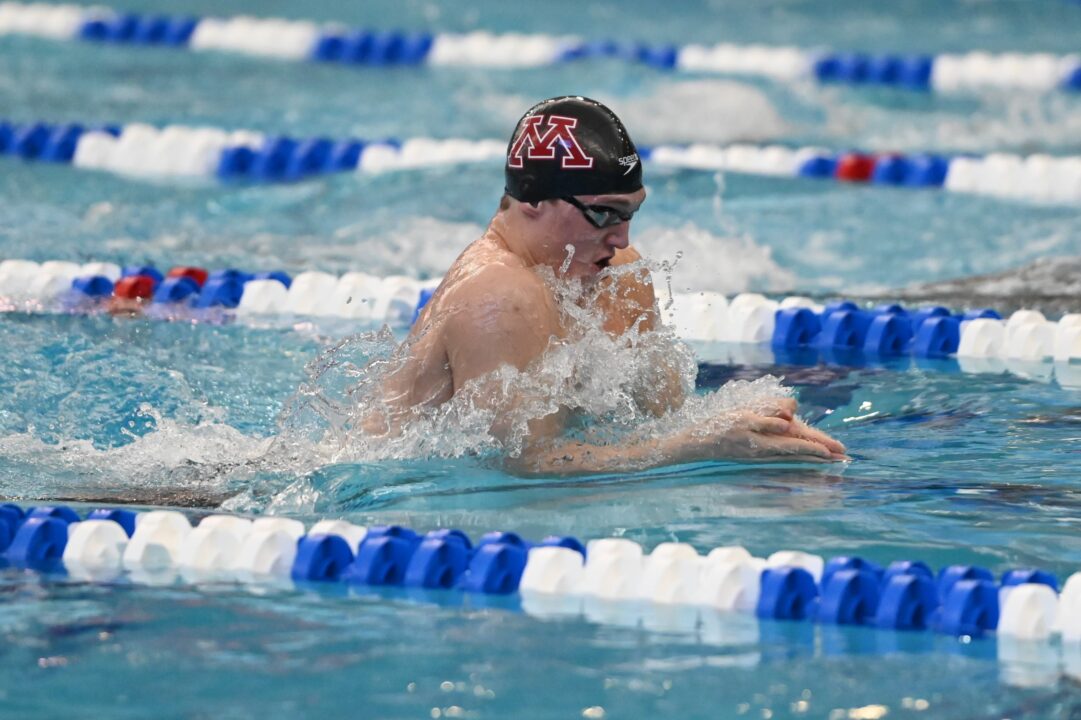 Minnesota overcame Purdue in the Boilermakers’ home opener, winning the meet by 57 points.

The two teams have a long history, first competing against each other during the 1947-1948 season. Out of 63 meets between the two, Minnesota has won 43, or almost 70% of the meets. Purdue, however, has won the dual meets the past two seasons.

Minnesota won 10 of the 14 events at the meet, including a sweep of the diving events by junior Jake Butler.

Last season, Olson qualified for both backstroke events at the Big Ten Championships, but Sachtjen missed finals. While it’s still early in the season for the Gophers, Sachtjen’s time is almost as fast as his swim at the 2021 Big Ten Championships (48.83), and it’s faster than any dual meet in his career to this point. Evidence of his rapid improvement can also be found from this summer, when he dropped 4.8 seconds in the long-course version of the event.

Minnesota also had a standout freshman performance. Bar Soloveychik, an Israeli swimmer, made his college debut by winning both the 200 free (1:39.20) and the 500 free (4:30.77). In March of this year, Soloveychik broke the 400 meter freestyle national record for Israel with his time of 3:49.77. Soloveychik is part of our honorable mentions for the 2021 recruiting class, and he is a contender to earn an NCAA cut in the 500.

The 1000 free was Nagy’s first career win with the Gophers. His best finish last season was ninth place in the 1650 at the Big Ten Championships.

While Minnesota dominated the distance freestyle events, Purdue swept the sprints. Senior Nikola Aćin won both the 50 and 100 freestyle with times of 20.17 and 44.46, leading a 1-2-3 sweep in both events by Purdue swimmers. Aćin had an eventful 2021, qualifying for the 2020 Olympics with Serbia as part of the 4×100 relay and winning the silver medal in the 100 free at the 2021 Big Ten Championships. He also set a team record last year in the 100 freestyle (41.81), so it’s pretty safe to assume he’ll stick to the sprint freestyle events for the rest of the season.

Samuels won the only other individual event for Purdue, the 100 fly. His time of 48.57 was just a couple hundreths off of the fifth-best performance of the entire 2020-21 season for Purdue. He’s also ranked number 17 in our 2021 recruiting class after being unranked the previous year. He dropped four seconds in the 100 fly last season for a best time of 46.78, and he’s already emerged as a top performer for the Boilermakers.

The Purdue men got back in the win column a day later at the Indiana Intercollegiates meet, but they’ll have their next chance for a dual meet win on October 22 when they take on Notre Dame. Minnesota will compete against St. Thomas at the end of the month.

Purdue living rent free in this guys head. Comments on all Purdue articles.

Just shocked by it. They have a great university. Great facilities. Huge diving points year after year. In a state with mega high school talent. Just shocking. Not sure what the issue could be.