Michigan Still With Many Scorers; Top Seeds Spread Out on Final Day of 2013 Big Ten Championships 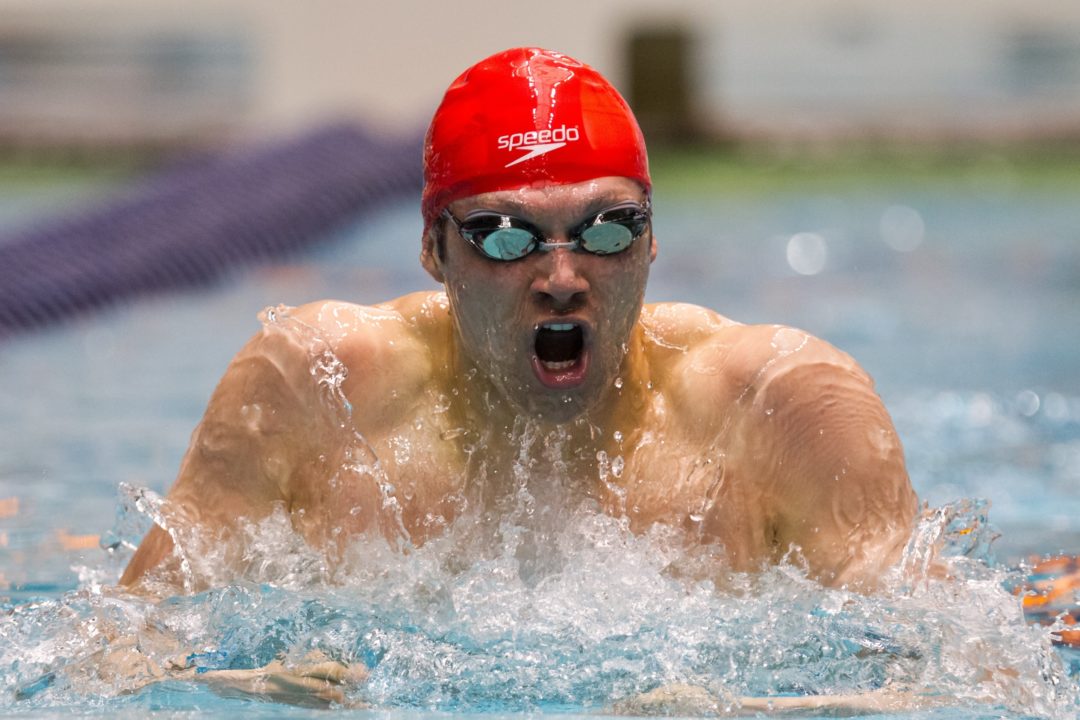 Cody Miller is from Nevada, but don't bet against him in the men's 200 breaststroke tonight. (Stock Photo Courtesy: Tim Binning/TheSwimPictures.com)

Natalie Schumann and Jessica Campbell are leading our coverage of the Big Ten Men’s Championships. This report was written by Schumann, who is a journalism major at Indiana.

Indiana’s Eric Ress secured the top seed with a pool record time of 1:40.29. Ress finished third in yesterday’s 100 backstroke and will be joined tonight by teammate James Wells (1:41.33, fourth), two-time B1G 100 backstroke champion. Wisconsin’s Andrew Teduits (1:40.50, second) and Penn State’s Nate Savoy (1:41.03, third) round out the top four in what is sure to be an extremely close race.

Minnesota’s sprinter Derek Toomey continued his streak of fast swims at this meet, qualifying first with a 42.60. He broke the pool record as well as Matt Grevers’ meet record set in 2005. Toomey’s time this morning would have placed fifth at last year’s NCAA meet. Michigan’s 50 freestyle champion Bruno Ortiz was second with a 42.84, followed by teammate Zach Turk (42.90) and Purdue’s 50 freestyle runner-up Daniel Tucker (42.94). All four top qualifiers were faster than last year’s B1G championship time of 43.11.

Last year, a 1:58.00 made top eight; this morning, it barely made top 16. Others to watch include 400 IM champion Michael Weiss of Wisconsin (1:56.82, ninth) and Minnesota’s 100 breaststroke finalists Joshua Hall and Max Cartwright (both 1:57.04). Tonight will ultimately be a battle between Miller and Funk, but Indiana’s two finalists could score valuable points as well.

Standings and Up/Downs (no diving included)

Michigan, with 16 swimming scorers tonight and a huge advantage, it would seem, into the 400 free relay have all-but-sealed the team title. Now the focus will be on getting as many guys as possible qualified for NCAA’s, so expect that to possibly play into the relay decision.

I think the up/downs are wrong…or perhaps not fully updated.

U-M should have 15 finalists. Not even including the 1,650, where it should not only have the favorite (Jaeger) but the potential for other finalists in Feeley and Ryan, maybe even Nielsen.

Sorry guys, I think I was using the old ones. They were right on my s/s…don’t know where those came from. Anyhow, should be fixed now.

Either way, they are just crazy fast.

My IU is swimming great, better than expected! Surprising Purdue is hanging onto 5th wih only sprint freestyles and diving working for them. Shows how a program can concentrate on a few events and still be relatively competitive. Purdue needs a couple 200 freestylers desperately.though!