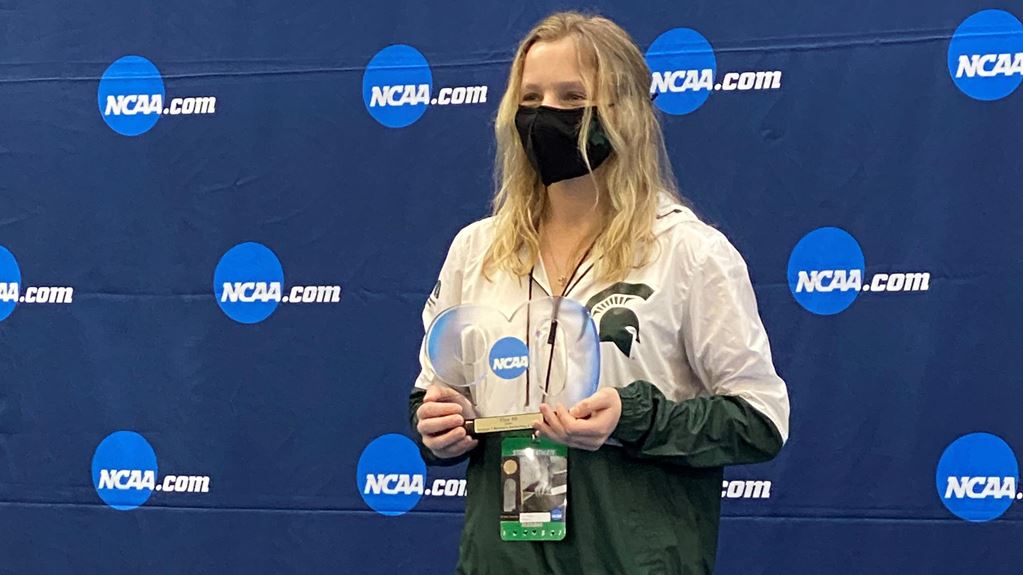 In her, and her team's, final meet Amanda Ling was recognized with the NCAA Elite 90 Award, given to the athlete with the top grade point average. Current photo via Michigan State Athletics

Michigan State senior diver Amanda Ling, who holds a perfect grade point average of 4.0 while majoring in English, was recognized with the Elite 90 award on Thursday at the 2021 NCAA Division 1 Women’s Swimming and Diving Championships. The award is given each year to the student-athlete with the highest cumulative grade-point average who competes at the NCAA Championships in the sport. In order to be eligible athletes must have been a member of their team for at least two years and be an active participant at the championship competition.

This was Ling’s first year qualifying for the NCAA championships after qualifying for the NCAA zone qualifier in her first three seasons. Ling finished her career earlier this week when she finished in 37th on the 1-meter board. This isn’t her first academic distinction during her collegiate career, as she has been named a three-time Academic All-Big Ten selection on three separate occasions and was twice a Big Ten Distinguished Scholar.

Eric Best, Ling’s diving coach, had to say of her receiving the award:

“I am so happy to see Amanda receive this recognition she so richly deserves. I have never worked with an athlete who is so driven to succeed in all aspects of her life.  She is an athlete who is never satisfied but has learned to enjoy her successes. I am so incredibly lucky to have been her coach.”

Ling is just the second Michigan State athlete to be recognized with the Elite 90 award. In 2014-15 basketball player Colby Wollenman received the award, becoming the first from the school to do so.

Despite winning one of the NCAA’s highest academic honors, Ling’s award comes at the end of what will likely be the final season for Michigan State swimming. While a Title IX lawsuit was filed in January and swimming and diving alumni have asked for transparency in the decision to make the cut, the school has remained steadfast that the Spartans will be without a program next season.

This one hurts a little bit.