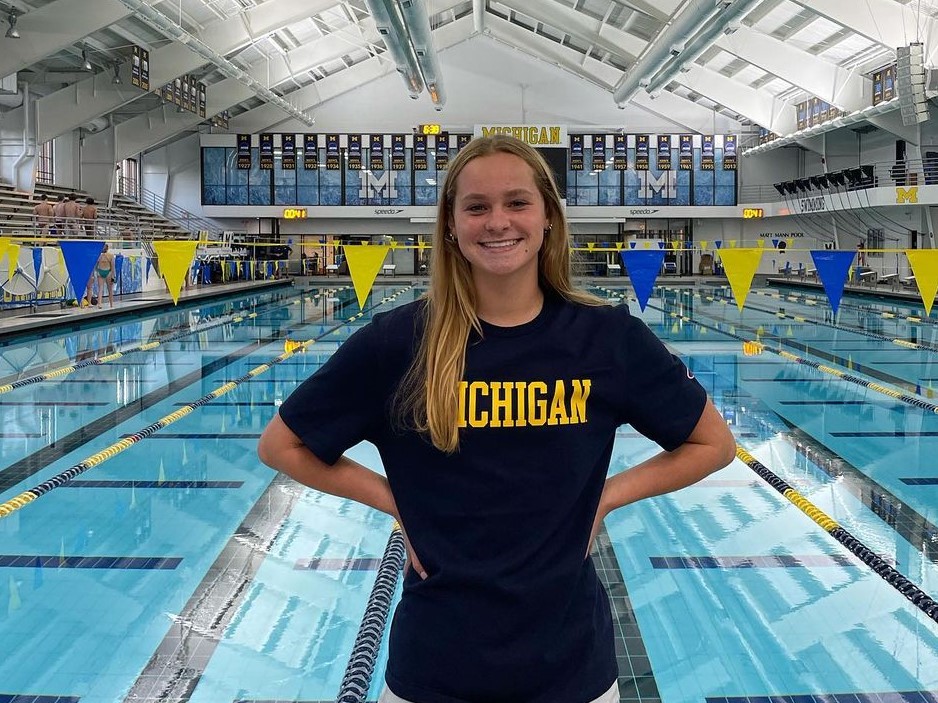 The first day of the meet was electric, seeing Club Wolverine 17-year-old and Michigan recruit Hannah Bellard get the ball rolling. Stock photo via Hannah Bellard

This year’s meet is playing host to approximately 400 swimmers, made up of a mix collegiate and club. Some of the college teams in attendance include Michigan, Purdue, Penn State, and Oakland, while big clubs such as Club Wolverine, Carmel Swim Club, Dayton Raiders, Marlins of Raleigh, and Badger Swim Club are competing as well.

The first day of the meet was electric, seeing Club Wolverine 17-year-old and Michigan recruit Hannah Bellard get the ball rolling. In the first event of Friday’s finals, the women’s 200 free, Bellard led wire-to-wire, racing to a new person best. She got after it from the start, splitting 28.30 on the first 50 and following it up with a 30.33, for a 58.63 on the first 100. Pulling away from the field, Bellard then broughit the swim home in 1:02.34 on the final 100, getting her hand on the wall in 2:00.97. The marks a new personal best for Bellard by half a second, as she inches closer to breaking the 2:00 barrier.

Bellard pulled a tough double on Friday night as well, swimming in the women’s 100 fly as well. She put up a strong performance there as well, taking 2nd in finals with a 1:00.24. That swim was just 0.39 seconds off her personal best of 59.85.

Taking the women’s 100 breast was Purdue’s Mason Folcik in 1:11.01, getting her hands on the wall first in a thriller with Carmel’s Devon Kitchel (1:11.30). The pair was virtually tied at the 50m turn, with Folcik splitting 33.80 and Kitchel 33.82. Folcik would just ever so slightly out-split Kitchel on the 2nd 50 as well, earning her the win.

Michigan’s Bence Szabados was victorious in the men’s 100 fly, swimming a 54.57. Szabados was a tick faster in prelims, clocking a 54.43.