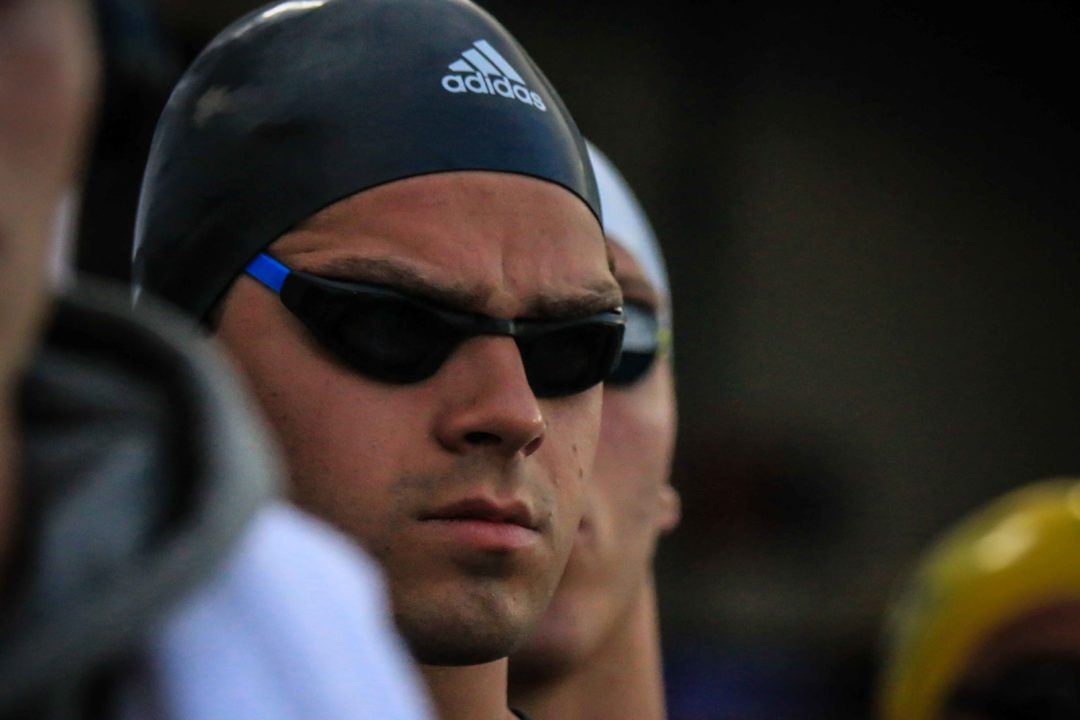 Andrew is the 4th seed in both the 50 back and 100 fly tomorrow morning. Archive photo via Jack Spitser/Spitser Photography

Tomorrow will be the first full-fledged day in Richmond’s stop of the Pro Swim Series, and there are a few big scratches in tomorrow morning’s prelims session.

The biggest name absent from an event is Race Pace Club’s Michael Andrew, who has scratched out of the 100 breast. Andrew, one of several American men with a viable shot to making the 2020 Olympic team in the 100 breast, will instead focus on the 50 back and 100 fly. He’s seeded 4th in both events, though the 50’s are seeded with swimmers’ times from the 100 of the corresponding stroke. Andrew set the Pro Swim Series record, 24.68, when he won the event in Knoxville in January of this year. Meanwhile, NC State’s Justin Ress scratched the 50 back. That was the only event on his schedule for tomorrow, while he entered the 50 and 100 free later in the meet.

Gunnar Bentz of Dynamo Swim Club won’t race the men’s 400 IM after being the 2nd seed in the event. He is still entered in the 200 IM and 200 fly later in the meet. In the women’s 400 IM, Hali Flickinger of Athens Bulldogs Swim Club and Makayla Sargent of NC State, seeded 6th and 7th in the event, respectively, both scratched. Flickinger will still have a full morning, as she’s set to race the 200 free and 100 fly. Hannah Moore will be in the 400 IM, meanwhile, after scratching tonight’s 800 free.

The other big scratches came in the 200 free. 6th seed Paige Madden is out of the women’s race, while Matias Koski, the 5th seed, is out of the men’s.

Is Andrew really getting crap for doing „just“ a double and not a triple?

How dare a breaststroker step out of line. The nerve, really. Everyone knows breaststrokers are to be kept in their boxes at all times. Don’t let them do anything but breaststroke.

And seriously, DO NOT feed them after midnight.

I think it’s about fly vs breaststroke. Why race fly and not breaststroke? It’s not about a triple.

Interesting, Claire Tuggle and Ella Eastin in the same heat of 200 free

That 100 Breast is pretty long.

It’s the same length for everyone

Unless you train USRPT….

John said it is the same length for all, not the same time. The distance is 100 meters, regardless of the time.

US has to choose between Michael Andrew and Andrew Wilson for their breaststroke leg in medley relay this summer. If I’m a fan of US team I would prefer him to focus more on breaststroke than butterfly.

he only wants to earn more money

5
-13
Reply
Honest Observer
Reply to  remel can do anything

Don’t we all (want to earn more money).

7
0
Reply
Philip
Reply to  remel can do anything

He’ll be fine. It’s like when Dressel was doing breaststroke for Florida and people were worried he wasn’t focusing on free. This is a non-issue.