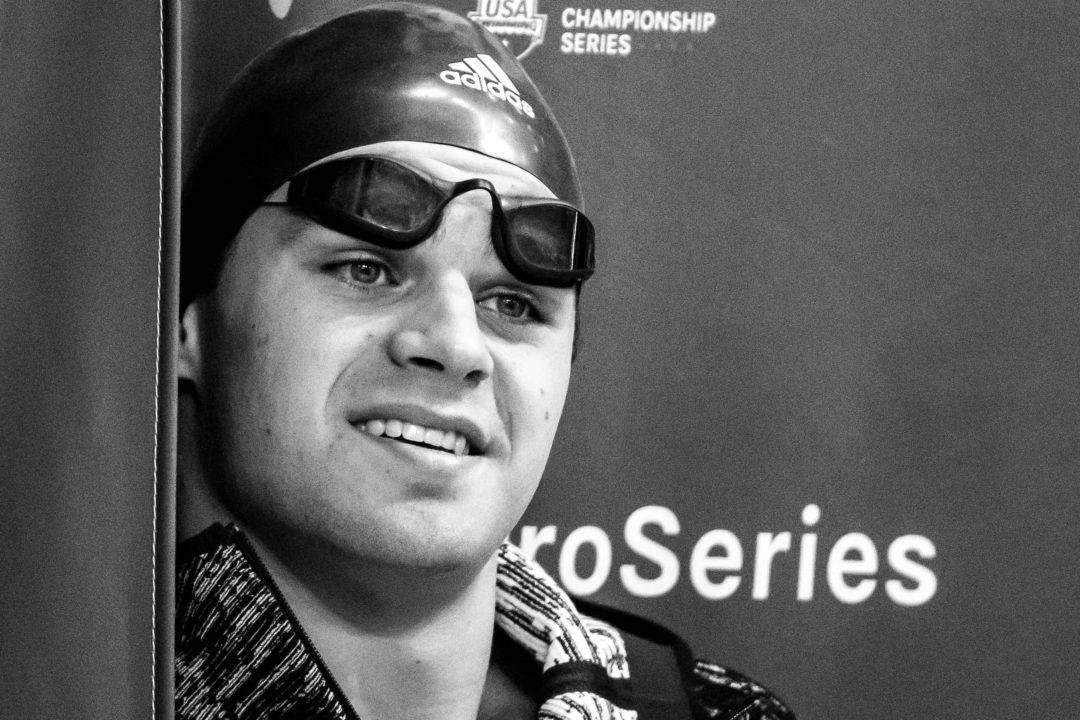 Michael Andrew dropped a new best time of 18.91 the 50 free on Saturday night of the Columbia Sectional, shaving .26 seconds off his previous best time of 19.17. Archive photo via Mike Lewis/Ola Vista Photography

In other 50 free news, 45 year old Olympic Gold medalist Josh Davis broke the US Matster’s national record with his 20.99. That time marks the first time a swimmer aged 45 or above has broken 21 seconds in the 50 free. The previous record was 21.06 from Richard Hughey in 2010.

Good for Michael! Best times are always fun (and get few and far between). Hope he’s enjoying it.

Exciting thing is his upside— not talking about his controversial training methods. I find he has quite a few technical issues to resolve, when we compare his stroke mechanics to other top sprinters in the world. He can get there!

Race video? I have a very low quality one if anyone’s interested. Well so do a lot of people I’m assuming, including Josh Davis, as he filmed it right behind me.

He took two extra strokes on the finish.

1
0
Reply
Caeleb Dressel Will Get 8 golds in Tokyo

4
0
Reply
Caeleb Dressel Will Get 8 golds in Tokyo

His ultimate goal is still Tokyo 2020 in the big pool.

and yet, if we are being candid, you are the quintessential ‘small’ pool (bathtub) hater….

the man is allowed to have an opinion

Too bad he will not be swimming in college

MA is crazy. Does he seriously do most of his training at home in that little 2-lane homemade pool alone?

Obviously it works for him.

Completely boggles my mind, and his accomplishments are celebrated like he is the anti-Dean Farris.

If you told me that this person just did an 18.9 I would never have believed you. I think it just means that there are different methods to achieve the same goals. My daughter’s club prioritizes aerobic and long-term development (train the young kids to be IMers and distance free) and have seen tremendous results. On the other hand maybe USRPT can actually work as well.

Looks like michael andrew is incorporating new things to his training. Went to high altitude training in Mexico and is doing some weight training.

josh davis is a USRPT advocate as well

Michael Andrew does more different strokes training instead of lots of freestyle training and more at a race pace, I think this helps than do all the high freestyle yardage.

it’s bad technique according to the world of swimming not just the comments here. The fact that he’s already insanely fast swimming the way he does is incredible, if he can fix a few things with his technique on all his strokes it could push him to those major meets he’s trying to make.