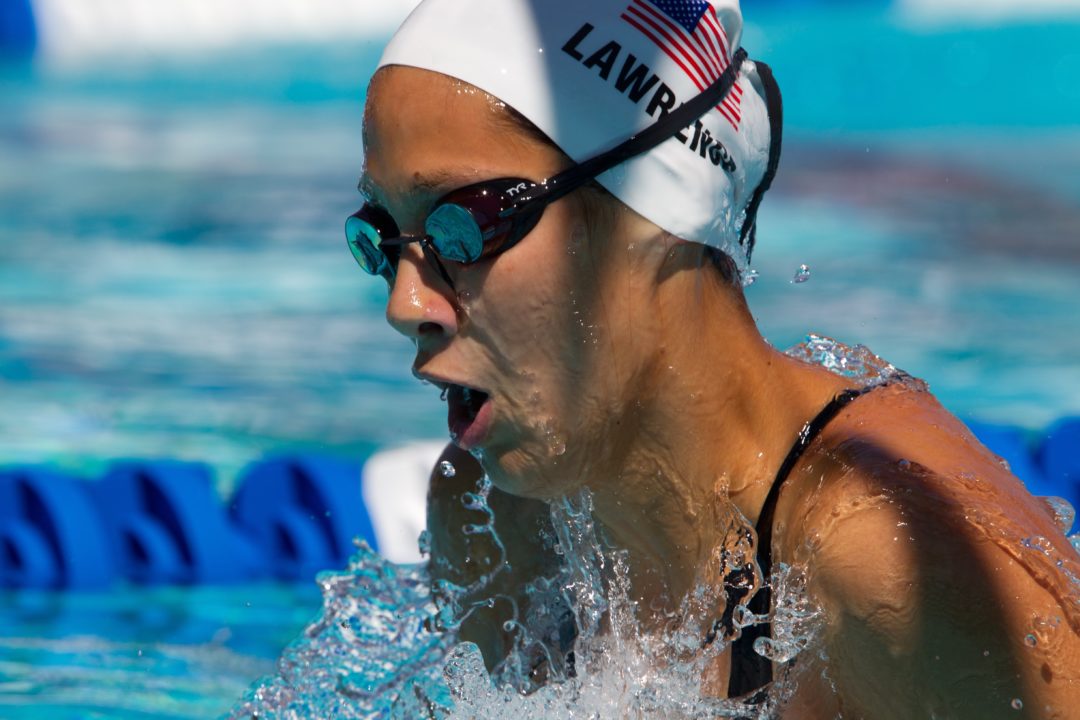 In Federal Way, Missy Franklin took a win in her only individual event but was upstaged by 14-year old Kimberley Williams. In Greensboro, Micah Lawrence swam well too

Missy Franklin kicked off night two of the Speedo Championship Series meet in Federal Way, Washington the same we she started night one: with a big victory. This time, however, she one-upped herself with a Meet Record in the women’s 200 free in 1:59.83.

That swim was a bit surprising to me. I expected her to at least be down around a 1:59-low after a strong 100 free. What this meet seems to come down to is that her training right now has her better in the sprints than the longer races, so look at a strong 100 back time on Saturday.

The other big swim of the session came from Bellevue’s Kimberly Williams. This is a Bellevue team that’s been having a great meet so far – and Williams continued that by winning the 400 IM in 4:48.01 (ahead of top-5 2012 recruit Bonnie Brandon in 4:50.61). For Williams, that’s a lifetime best by almost two seconds, and ranks her as the 5th-fastest 13-14 in USA Swimming history in the event. She’s the fastest 400 IM’er we’ve seen in this age group since Elizabeth Beisel in 2007. With times like this, Williams will continue to climb into the national consciousness. Watch for her in Saturday’s 100 breaststroke and Sunday’s 200 – her specialty stroke.

On the men’s side of the meet, 17-year old Christopher Webb out of Arizona – the reigning Arizona Swimming Swimmer of the Year. He swept the 200 free (1:52.21) and 400 IM (4:25.77), the only two individual events on the day. That 200 free was especially impressive, and cut two seconds off of his lifetime best. As the races get longer over the weekend, Webb will only get better.

There were a few good swims in the medley relay. The Colorado Stars’ 4th-place medley included a breaststroke appearance from Franklin, where she split 33.20. Kara Lynn Joyce anchored in 25.68 – she’ll want to be faster than that in the individual 50. A 15-year old named Prudence Rooker split a 25.79 on the freestyle anchor of Tualatin Hills’ relay. And the Denver Hilltopers won this relay led by a very fast 26.80 butterfly split from Cal commit Kelly Naze.

In the men’s race, South African Roland Schoeman, training with the Phoenix Swim Club, split a 23.11 50 fly for their winning ‘A’ relay. Way down the rankings, the 18th-place Superior Stingrays’ relay got a swift anchor from Aaron Ghiglieri. He marked a 22.85 on the rolling start, which should attract the attention of some college coaches for the seemingly-unsigned Ghiglieri.

The action really heated up on night two of the Greensboro Sectional Meet after a relatively slow distance-night 1.

SwimMAC’s Micah Lawrence had her best swim since last summer’s National Championship meet with a 1:09.29 win in the 100 breaststroke, which was the best swim of the meet. She was part of a huge meet for the David Marsh’s Carolina crew that won over half of the events at this meet (though the times weren’t mindblowing).

Davis Tarwater won the 200 free in 1:50.54 (ahead of Georgia commit Matias Koski in 1:51.87. That’s not his best time, but considering that he’s coming off of a taper a few weeks ago for the Georgia High School State Championship meet, it’s not a bad mark.

And in the 400 IM, another Georgia commit, Ty Stewart, won in 4:23.18. That swim is a two-second leap forward from his previous best, and crushes the Misssissippi Swimming State Record.

Results not being posted live online, but those with smartphones can download the “Meet Mobile” application for real-time results.

Are Greensboro results not being posted to the web in real time? I can’t find a link to results anywhere, including USA Swimming.

Unfortunately no. If you have a smartphone, download the “Meet Mobile” ap and the results are live on there.