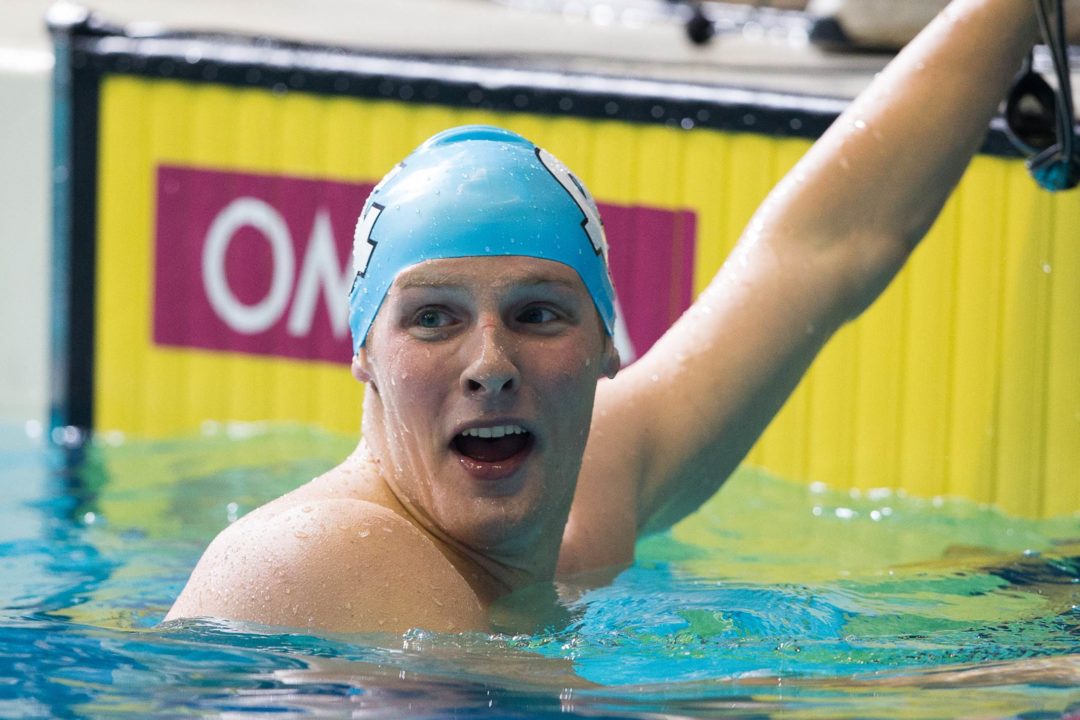 A current irony in swimming: the event perhaps most dominated by Michael Phelps‘ long shadow over the past decade is one completely unaffected by his return. Despite rejoining the competitive swimming world, Phelps says that he’s done with the 200 fly, and we have to believe him at least for this season, which leaves a battle the same group of young stars who have been trying to fill his flippers since 2012.

The most successful American in this event since Phelps’ retirement has been former UNC Tar Heels standout Tom Luchsinger, who is now training alongside Phelps at the North Baltimore Aquatic Club. Luchsinger is the defending national champion in the event, and also put up the highest American finish at last summer’s World Championships, just missing a silver or bronze medal by a little more than a half second.

Luchsinger still appears to be in great shape this season, holding the second-fastest time of any American in 2014, so consider him a clear-cut frontrunner.

The only American ahead of Luchsinger, though, is one of the more intriguing young swimmers of the summer. Defending Junior World Champ Andrew Seliskar is a rising high school senior, recently ranked as the top high school prospect in the nation. For many of the young talents we note in these previews, the big jump to the international level is still a few years away, but at 17, Seliskar seems in perfect timing to rise to national (and perhaps even international) standards. With the 200 fly coming on day 1 of nationals, this event will be Seliskar’s first chance to make his big statement.

Though he’s had more success in other races, Tyler Clary is still a bona fide threat here. He was the second Olympian behind Phelps in 2012 and the second World Champs entry behind Luchsinger last summer. For a guy who’s continually in the shadow of the iconic Phelps and Ryan Lochte duo, the 200 fly could be a perfect opportunity for Clary to rise to the top of the field.

California star Tom Shields is an interesting case. Known more as a sprinter, he’s improved dramatically in the longest butterfly event over the last several seasons. He was 2:00.5 back in 2011, 1:58.7 at the 2012 Olympic Trials and 1:57.3 last summer, missing a World Champs berth in the event by one spot. Shields has perhaps the most dangerous underwaters of anyone in the world, and continues to add more patience and consistency to his over-the-water swimming as he becomes more and more of a factor in the Olympic-size pool.

From across the bay from Shields comes Bobby Bollier, the former Stanford Cardinal who’s always in the hunt in this event. Bollier was the highest American finisher at U.S. Open last season. The downside with Bollier is consistency – he’s had great seasons often followed by seasons where he’s gained time. Bollier posted his lifetime-best all the way back in 2008. He nearly cracked that mark after several slower seasons at the 2012 Olympic Trials, but then regressed time-wise last summer. Still, if Bollier is on, keep an eye out for him this August. He races at the LA Invite this weekend, which will be a good benchmark for where he’s at.

IM sensation Chase Kalisz deserves a mention here. The rising king of the American IM scene, Kalisz is a threat to one day break the 400 IM record held by his longtime NBAC teammate Phelps. Kalisz has improved remarkably in the 200 fly since joining the Georgia Bulldogs, to the point that he could wind up on a national team in the event. He’s got choices to make though, because he could be on the National Team in at least 5 different events, and over a 5 day meet that will be a tough schedule.

Some college athletes to keep an eye on: Michigan Wolverine grad Kyle Whitaker was a finalist last summer, and is coming off a great NCAA season. There’s Cal’s Adam Hinshaw. Indiana’s Steve Schmuhl. Bollier’s Stanford teammate Tom Kremer. Texas’s John Martens and Clark Smith are each ranked within the top 10 Americans this year, as is UNC’s Ben Colley.

Whoever makes the U.S. National Team, they’ll need to take a major step forward, especially to earn full funding from USA Swimming, as there currently aren’t any Americans ranked within the top 20 in the world in this race. Bringing home medals in international competition – once all but a certainly thanks to Phelps – is now a tooth-and-nail struggle for a new-look U.S. contingent.

My picks (with lifetime-best included):

unfortunately, luchsinger didn’t fare too well last weekend. 200 fly is first event on first day so they can’t mess around. luckily for everyone, top 3 will probably make pan pacs. be nice to see a youngster break through for the future!

Good catch! Times from Athens hadn’t yet made it into the USA Swimming database as the story was being written. Kalisz’s new time is included.

Will be interesting to see what an 18&U with say an in season best of 2:00 and improving decides since you can only make Junior Pan Pacs at Nationals. Not a favorite with that time but no shot if opt for Junior Nationals instead

Andrew Seliskar takes it in 1:54 high.

But since MP said goodbye to that event, USA is without a big champion.
The 200 fly is even ironically perhaps the weakest US event on the men’s side right now!
That event needs new blood.
And Andrew Seliskar represents clearly the future.
Junior world champion.
Much endurance.
I think he will play the olympic medals in 2016 and can become the… Read more »

I hate making predictions, because you just never know what’s going to happen, but I’m bully on Seliskar. He got faster all last summer, culminating in gold in this event at Junior World Championships. He has the fastest time in the US so far this year, and seems to a couple of seconds ahead of where he was last year. I would not be shocked if he medals at Pan Pacs, World Championships, and Olympics, and if at least one of those is a gold.

You hate making predictions, because you just never know what’s going to happen.
That’s the very principle of the prediction 🙂
You try to predict the result before the race.
And most important, you are not afraid to be ridiculous. 🙂

Fine. Seliskar beats “King Chad” at either the 2015 World Championships or 2016 Olympics. You heard it here first.

What about the kid from Fresno Dolphins, Wright I believe? Didn’t he have a breakout swim last year?

I think he won the event at the Santa Clara GP, but skipped Nationals. Ended up with the 9th fastest time in the US last year with a 1:57.90. I’m guessing he’ll be on the bubble of the A-final this summer.

Justin Wright was selected for the YOG team so there’s that.

Andrew Seliskar and Justin Lynch represented the U.S. in the 200 fly at the 2013 World Juniors.

Justin Wright’s best time was the 2013 Santa Clara Grand Prix with a :57.90 and he was actually slower at both the 2013 Junior Nationals and 2013 U.S. Open the week before Juniors.

He is going to Arizona in the Fall as I recall.