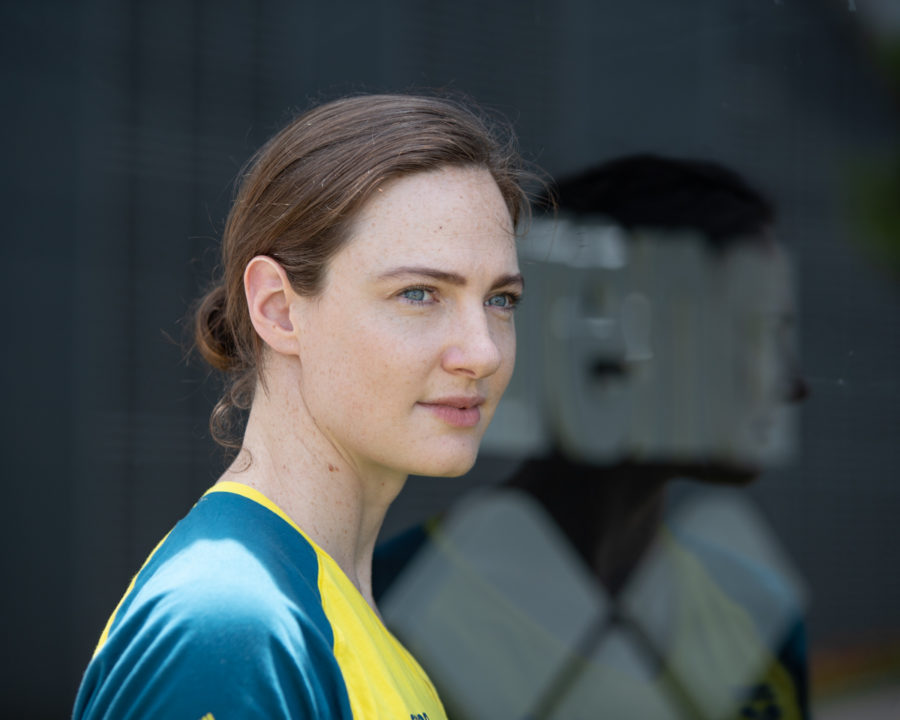 The 50 freestyle will serve as a re-match between the two following McKeon's 100 freestyle victory earlier on in the meet. Current photo via “Rafael/Domeyko Photography”

Look out for 19-year-old Kaylee McKeown, who already came close to a world record in the 100m back. She has more racing to do in Sydney.

During the 4th and final prelims session of the 2021 Australian Swimming Championships, swimmers returned to the pool to deliver yet another set of quick swims. Racing during day 4 prelims featured the women’s and men’s 50 freestyle, 200 breaststroke, and 50 butterfly. Finals will feature all 3 of those events along with timed finals of the women’s 800 and men’s 1500 freestyle.

In the women’s 50 freestyle, Emma McKeon and Cate Campbell set up yet another battle by swimming the top 2 times in the heats with a 24.28 and 24.88, respectively. Their most recent head-to-head was in the 100 free final where McKeon managed to nad the victory with a 52.29 to Campbell’s 52.85. Campbell, however, had the quickest time overall, having hit a 52.49 in the prelims of the 100 free.

The 50 free final won’t necessarily be a runaway for McKeon or Campbell considering that another two swimmers in the for of Bronte Campbell and Madi Wilson got under 25 seconds, hitting a 24.92 and 24.97, respectively. Also in contention is Meg Harris who trailed with a 25.04 but has a 24.89 in the event, keeping her in the mix.

Another big showdown during the finals will Zac Stubblety-Cook v. Matthew Wilson in the men’s 200 breaststroke. Wilson came into the meet as top seed and former world record holder, having hit a 2:06.67 at 2019 Worlds which stood for only 1 day until Anton Chupkov lowered the mark to a 2:-6.12. Despite Wilson’s top seed, Stubbletly-Cook out-swam him in the prelims with a 2:11.01 to Wilson’s 2:11.44.

Each of them has one breaststroke title to their name so far this week as Stubbletly-Cook took the 100 gold on day 2 in a 59.87 while Wilson won the 50 on day 3 in a 27.55. The two will be gunning for the title tonight as they prepare to bid for a spot on the Olympic team at Australian Trials. There. it will take a top 2 finish and a 2:08.28 or faster to nab a spot on the Olympic squad.

On the men’s side of the 50 freestyle, Hungary’s Maxim Lobanovszkij was the quickest in the field as he posted a 22.27 to out-swim Jack Cartwright‘s 22.61 and Ashton Brinkworth‘s 22.63. Lobanovszkij was a bit over his entry time of 21.74 as well as the 21.77 that he swam earlier in the year at the Pennington vs. Wilberforce Dual Meet in New Jersey in February. Considering that he represents Hungary internationally, Lobanovszkij won’t be eligible for the Australian title in the finals, leaving it up to Cartwright and Brinkworth to battle it out with Kyle Chalmers (22.65), James Roberts (22.79), and Daniel Hunter (22.80), among others for the title.

In the only non-Olympic event of the prelims session, Holly Barratt posted a 26.56 as the only sub-27 in the field while Madi Wilson and Mia O’Leary followed with a 27.05 for second and 27.12 for third, respectively. In the men’s prelims, William Yang and Shaun Champion topped the field were separated by only 0.01 seconds. Yang was a 24.23 in the prelims while Champion posted a 24.24. They will face stiff competition in the final as Nicholas Brown (24.34), Matthew Temple (24.35), and Edward Marks (24.35) all got within 0.12 seconds of their top times.

Someone scratch the 50 fly so Cody can swim! 😂😂

I think he’s good for the sport. he should get on an ISL team and swim a match or two. He can’t do that much harm and it’ll be good to get viewers outside the swimming universe interested (which is what the ISL is all about, right?). He’s got like 4 million instagram groupies… if only a fraction of them gets into swimming because of him, he’ll be the biggest draw for the sports since MP in ’08.

Someone might have nominated for age group so we will see

Two of the three swimmers who tied for 13th had to do a swim off, so I’m pretty certain that at least one of the 18-21 year olds faster than Cody is swimming in the age group final.

There is 3 X 18/19yr age group swimmers in overall top ten so I will suggest at least one of them will be in the age group final which leaves Cody Simpson (11th overall) amongst the top ten open swimmers and as such he should get a finals swim.

Confirmed. Just checked . He’s in lane 0 for the open final.