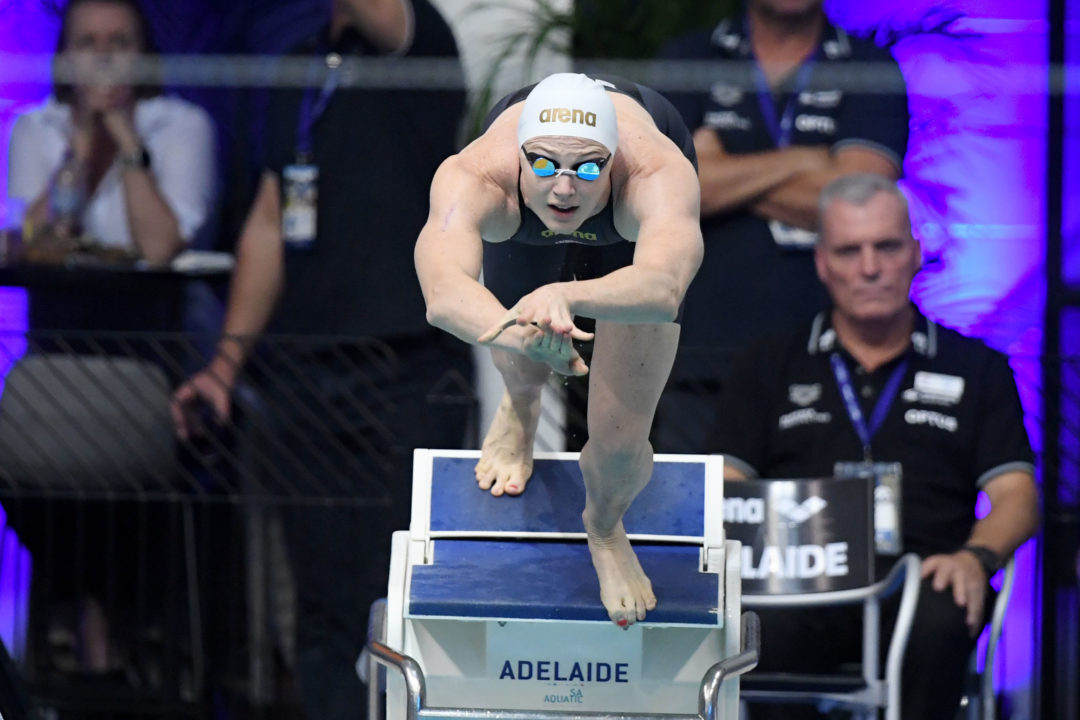 Campbell and McKeon led the way with prelim swims of 52.43 and 52.71, respectively during day 2 prelims at Australian Nationals. Archive photo via Swimming Australia/Delly Carr

Racing continued on the second night of the 2021 Australian Swimming Championships as day 2 prelims featured the 100 freestyle, 100 backstroke, 200 butterfly, and 50 breaststroke. As a reminder – this meet is being run with morning finals and night time prelims so the corresponding finals for this day 2 prelims session will occur in the morning of day 3 (10 am local time on April 16 / 8 pm EST on April 15).

One of the quickest fields we saw in the water during day 2 prelims was the women’s 100 freestyle in which Cate Campbell posted a 52.43 for top seed while Emma McKeon also dipped under 53 with a 52.71. Having two women in the 52 range at this point in the season certainly bodes well for Australia both in terms of individual performance at the Olympic Games this summer as well as for the relay. Their relay efforts could likely be back by the quartet of women who all swam a 53 this morning as Madi Wilson touch 3rd with a 53.40, Bronte Campbell a 53.62 for 4th, Mollie O’Callaghan a 53.78 for 5th, and Meg Harris a 53.87 for 6th.

Considering that we aren’t yet at Australian Trials which are set for June, we can’t say for sure that who will end up racing the event individually or in relay format for the country. The fact, however, that it will likely take a 54 to make the Trials final and 52 mid to make the team is certainly evidence that Australia will be a force to be reckoned with in the event this summer.

On the men’s side of the 100 freestyle, 2016 Olympic Champion Kyle Chalmers managed to post the top prelims time by nearly a second with a 48.11. The closest competitor to Chalmers was Louis Townsend who got under the 49-second mark with a 48.93 to improve upon his entry time of 48.93. Jack Cartwright and William Yang swam the 3rd and 4th fastest times of the prelims with a 49.36 and 49.43, respectively.

Notably, 3rd and 4th seeds Clyde Lewis and Cam McEvoy missed out on qualifying for the A final as McEvoy hit a 50.29 for the 11th fastest time in the field and Lewis was a 50.78 for 21st. Both were slower than their entry times, McEvoy a second and a half over his 48.66 seed and Lews more than two seconds slower than the 48.45 he went in with.

Following Kaylee McKeown‘s 50 backstroke triumph during day 2 finals, she and Emily Seebohm set themselves up for another backstroke battle in the 100 backstroke finals as McKeown posted a 59.29 prelim swim while Seebohm was a 59.85. While both were a bit off McKeown’s current national record in the event of 57.93, McKeown managed to get under Swimming Australia’s selection cut for the Olympics of 59.71.

Mollie O’Callaghan finished third in the prelims with a 1:00.60 and will be looking to get closer to her 59.59 PB which she swam in December 2020. Not to be counted out of contention, short course world record holder in the event Minna Atherton got into the wall in her prelim with a 1:00.85 which is more than 2 seconds slower than the 58.60 that she swam at the 2019 World Championships.

The biggest shock during day 2 prelims was Mitch Larkin‘s disqualification in the men’s 100 backstroke. Larkin swam to a 53.38 to establish the top time in both his heat and in the entire field but shortly after he cleared the pool, it was announced that he was DQed due to a false start in the event. In Larkin’s absence, Tristan Hollard will go into the 100 backstroke final as top seed with his 55.10 from the prelims while Thomas Hauck followed with a 55.25 for second seed while Bradley Woodward was third in a 55.33.

Setting up a heated battle for finals, Elizabeth Dekkers, Meg Bailey, and Brianna Throssell were separated by only 0.18 seconds in the prelims of the women’s 200 butterfly. Second seed heading into the event Dekkers was a 2:09.60 in the heats of the event and was closely followed by Bailey who with a 2:09.70 who moved up from 3rd seed to 2nd for the final. Brianna Throssell was entered as the top seed in the event and was just outside of the top 2 in the prelims with a 2:09.78.

All three will be looking to be faster during finals and will have a shot to achieve the Australian qualifying standard of 2:08.43 in the event which would bode well for them looking forward to Olympic Trials in June.

As for the men, Bowen Gough out-swam top-seeded Matthew Temple in the men’s 200 butterfly prelims with a 1:58.75 to Temple’s 1:59.31. That race for Gough was a few seconds short of his 1:56.65 PB in the event which he swam in July of 2019 while Temple also trailed his similar PB of 1:56.52 which he swam in the prelims of the 2019 World Championships. In terms of Olympic qualification, it’s going to take a PB from Gough and Temple this June in order to qualify to swim the event in Tokyo considering Australia’s selection cut of 1:56.25 for the event.

In the sole non-Olympic event of the prelims, Chelsea Hodges swam a 30.32 50 breast to get 0.16 seconds off the current Australian record of 30.16 held by Sarah Katsoulis. Jake Packard was the top seed in the event for the men with a 27.74, slightly ahead of Matthew Wilson‘s 27.78.

Larkin DQ in 100 back! Can he still swim it at the Olympics?

This is not the Aussie trials meet.

Seems like he hasn’t been the same mentally since his 100 free race in Rio. Unclear what his goals are at this point.

Anyone who describes himself in his IG bio as “over 17 billion hydrogen atoms tall” is indeed a nerd.

Will shape up to be a great 400 free relay race this summer!

Bring it on Aussies!

Yep, if Australia wins that will be 4 golds out of the last 5 Olympics….an amazing run for a non-US team.

It’ll become a lot harder to continue the run without Cate’s 51 low splits when she retires.

I think 54.4 personal best of Ariarne Titmus in prelim race deserves attention. She is currently 7th among Australian sprinters. It is very fast for a swimmer who is Olympic medal contender in 800 event and was recently injured.

Not quite the 52.6 Ledecky split in Rio.

If you are starting to run a comparison then you will be surprised by the number of similarities:
At Last Olympics Ledecky was 19. Titmus is 20 now.
In Rio Ledecky competed at distances from 100 through 800. And was on podium at all of them.
I think that Titmus had the same ambitions and what is more important may succeeded with that in Tokyo.
Ledecky’s 100FR at OT was 53.99 and she was 7th. It looks like Titmus is gonna do the same.
The only thing that I’m sure won’t be replicated are :
1:53.7, 4:56 and 8:04

I’d be interested in both the 200 & 400 free, Titmus knows shes taking on the GOAT & has said repeatedly, it will take a world record to beat Ledecky in the 400. I also think Titmus was not that far away in the 200.
Ledecky as always in a world of her own in the 800.

Don’t count on Katie Ledecky becoming ill at the Tokyo 2021 Olympics unlike the 2019 FINA World Aquatics Championships. As a footnote, the diciest event in Ledecky’s program has always been the women’s 200 meter freestyle.

There are no similarities between Ledecky and Titmus since Ariarne Titmus has never set a long course meter world record let alone win an individual gold medal at the Summer Olympics.

How/what is her injury?

I’m not a doctor to describe it professionally. And moreover a lot of things regarding this case was kept in secret. Google it and you will find plenty Australian articles about it.

Can you translate them to English pls?

Oh, boobstroke. Your sense of humor really runs the gamut, doesn’t it?

Actually she is back training with her squad very soon

I wonder what’s happening with the WADA and SIA appeals?