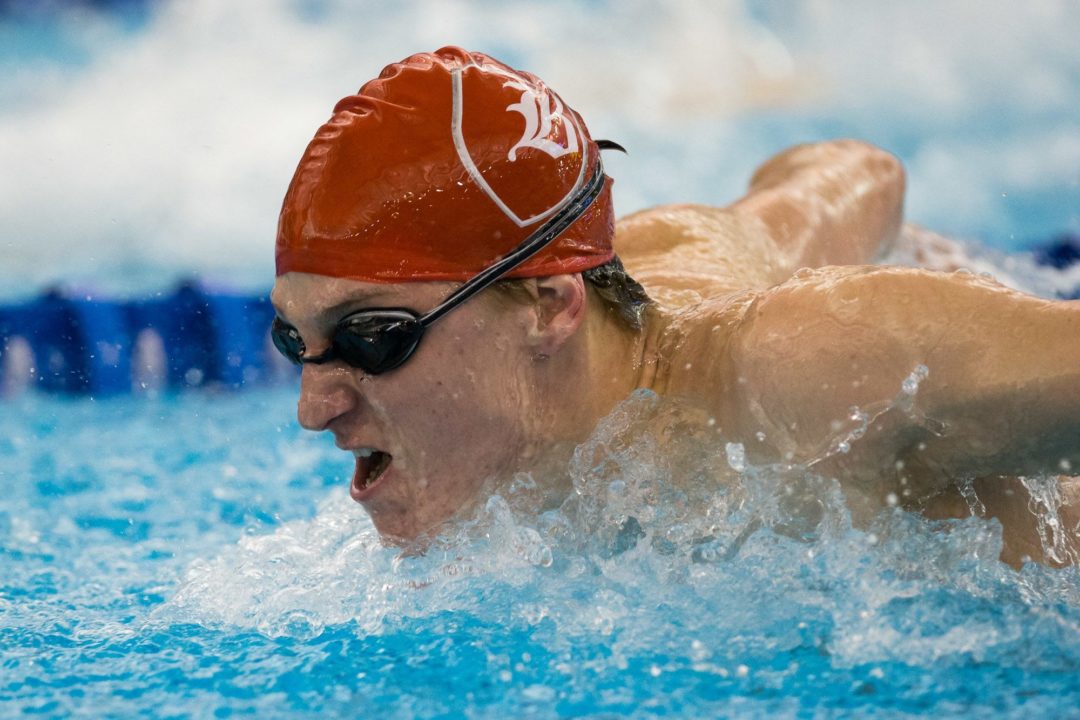 Division II Queens University hosted two very different teams on Thursday night. On one side, the Royals took on SEC power Tennessee in men’s and women’s dual meets. But on the other, Queens hosted local swim club SwimMAC Carolina and some of its professional athletes on “Team Elite.”

The meet was officially called the Royal Open, and featured a NCAA-lite event lineup that included only the 200s of each stroke and a 200 IM along with the full slate of freestyle events and both 200-yard relays.

Tennessee dominated the women’s meet, taking down 3 pool records, though Queens fought back with a pair of wins from Caroline Arakelian, one of them in a pool record of her own.

Faith Johnson had two big swims for the Vols as she continues to step into more of a leadership role. Johnson won the 50 free, dipping under 23 seconds with a 22.92. She technically won the college dual’s 100 free as well, though the fastest time actually came from SwimMAC pro Katie Meili. Johnson and Meili had an entertaining battle, with Johnson leading by .01 at the 50 turn, but Meili came back to win in 49.65. Johnson wound up second at 49.92

Arakelian matched Johnson’s win total for Queens. She won the 200 back with a 1:58.66, knocking down the old pool record, and, like Johnson, took second in the 200 IM to the professional Meili. In that race, Meili was 2:00.37 to blow away the pool record (which she already owned at 2:01.52) with a huge breaststroke split. Arakelian was 2:03.03 to claim the collegiate title.

Tennessee started out with a bang, just sneaking under Auburn’s pool record in the 200 medley relay. Johnson swam backstroke on that team, going 26.39, the best of the field. Molly Hannis crushed a field-best 27.86 breaststroke leg and it was off to the races for Tennessee. Harper Bruens (24.85 and also fastest of the field) and freshman Amy Lubawy (23.43) closed the team, as the foursome went 1:42.53 to take .03 off the old pool record.

Hannis broke a pool record individually, too, going 2:11.21 in the 200 breast. That’s a big-time swim this early in the season, and most notable was that she beat Olympian Micah Lawrence (2:13.75) by a wide margin head-to-head. Meili was also in that race, and went 2:6.04 for third.

In the 200 fly, both Mary Griffith and Heather Lundstrom got under the pool record for the Vols, with Griffith triumphing in 2:01.24 to Lundstrom’s 2:01.30.

One of the top prospects in the nation, the in-state recruit was as advertised against Queens, winning the 500 free and 200 fly in the top times ever swum in the Royals pool.

McHugh was 1:47.97 in crushing the 200 fly field. Second place was more than four seconds behind him, and he toppled the pool record by a second and a half. McHugh returned to win the 500 free with a 4:28.88, also a pool record, this time by almost six seconds.

Sean Lehane got a pair of wins for Tennessee, and broke a pool record of his own. His first swim came in the 200 free, where his 1:39.37 just topped SwimMAC’s French Olympian and pro Greg Mallet. Lehane’s best swim came near the end, when he went 1:44.89 to dominate the 200 back field in a pool record.

Queens’ star swimmer is Matt Josa, who used to swim for SwimMAC prior to his college years. Josa almost knocked off a prestigious pool record in the 200 IM, one that belongs to yet another SwimMAC pro, Ryan Lochte (who did not compete in this meet). Josa went 1:47.59 in that 200 IM, just three tenths off the mark Lochte swam last year.

Tennessee picked up two more pool records en route to their win. The 200 medley relay team of Lehane, Peter John Stevens, Tyler Mills and Troy Tillman went 1:28.92 to set the first men’s pool record of the night. Particularly notable on that relay were the 24.14 put up by the freshman Stevens on breaststroke and Mills’ 21.89 butterfly split.

The one area the Vols seemed to struggle a bit in was sprints. SwimMAC pros Mark Weber and Eric Knight battled for the 50 win, with Weber taking it 20.21 to 20.64. Tennessee’s top swimmer, Chris Sadsad, was barely under 21 at 20.96.

Then in the 100, Weber won again with a 45.05, and Queens got the fastest collegiate time with Hayden Kosater‘s 46.67, a tenth up on Tillman of Tennessee.

Queens also picked up a win in the 200 breast, where Nic Eriksson was 2:02.83 for the final pool record of the night.

Weber led the SwimMAC team to the top relay time in the 200 free relay. It was actually Mallet who put up the fastest split, anchoring in a blitzing 19.65. SwimMAC went 1:20.85; the top college team was Tennessee at 1:23.06.

I don’t recall seeing Michelle Cefal’s name on the results. Injury? Illness? Transfer? Or am I merely looking too deeply?

Pinion with a 9:15 1000. That and Heron’s 9:11 against UNCW. Looks like their young distance folks are rebounding back from injury.

Lehane is a beast.

McHugh looking good to start off with his 1:47 fly.

Where’s Thulin at though? They could really use him to tighten up their relays a bit.