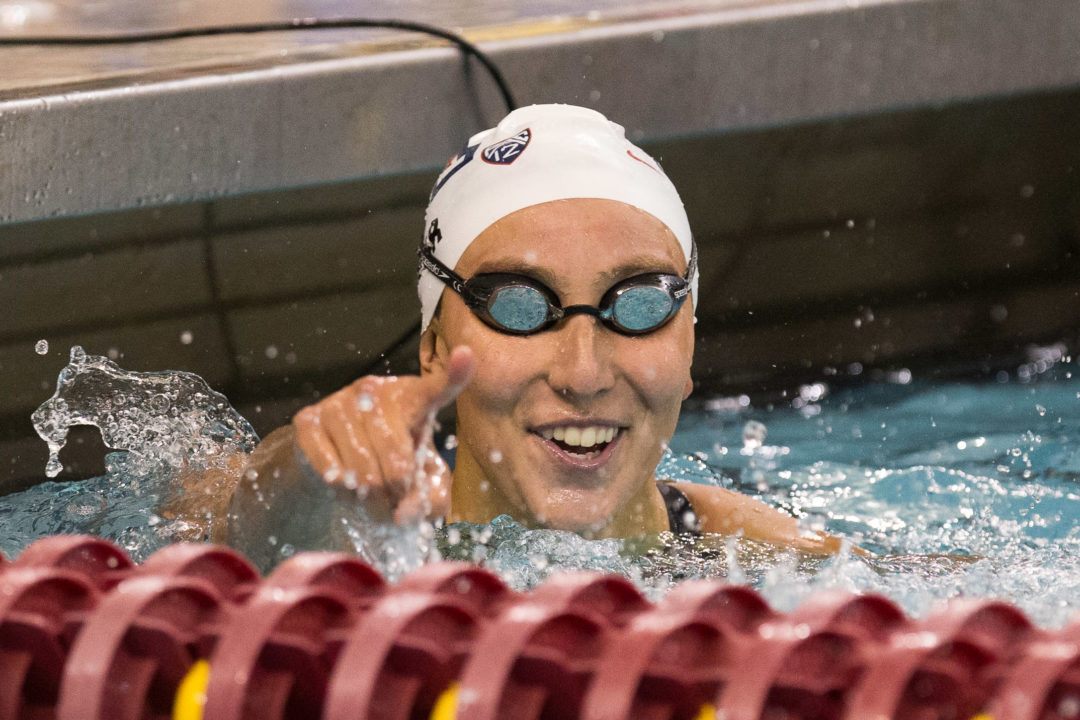 The most impressive result of the night was a 54.32 for Margo Geer in the 100m freestyle to claim gold. With that time she emerged victorious by over a two-second margin. Archive photo via Tim Binning/TheSwimPictures.com

This weekend Arizona is playing host to the Southwest Classic held by Tucson Ford Dealers Aquatics. Many Tucson swimmers threw down impressive results this far.

The most impressive result of the night was a 54.32 for Margo Geer in the 100m freestyle to claim gold. With that time she emerged victorious by over a two-second margin.

That time for Geer is the second fastest she’s been all season. At the end of January she posted a 54.23 at the 2015 BHP Aquatic Super Series in Australia.

Although she’s been slightly faster already, it is the fastest time that Geer has thrown down on American soil this season. At the Arena Pro Swim Series Mesa she was a 55.40, over a second slower than what she swam in Arizona.

The time in Arizona also points to the direction of faster swimming for Geer. Last season, her fastest in-season performance was a 54.91 at the 2014 Los Angeles invite. That was the only time she was under 55-seconds other then at nationals.

In fact, last season at the Southwest Classic Geer was a 56.54. Geer’s speed could mean good things for the American relays this summer.

Currently Geer is ranked 19th in the world in the 100m freestyle and is the third fastest American this season. Geer will be representing the United States this summer at the World Championships in Kazan, Russia as a member of the 4x100m freestyle relay.

Other than Geer, the best results of the night was done by Darian Townsend. He was the winner in the men’s 100m freestyle, taking down American backstroke star Matt Grevers. Townsend was the only swimmer under 51-seconds during the final, sporting a 50.87 at the touch. Grevers was a 51.49 for second, over half-a-second ahead of NCAA sprinter Brad Tandy.

Did Geer make it to Worlds on the relay?

She qualified in sixth position

She’s on the right track to qualify next year in the US 4X100 free relay team with Simone Manuel, Missy Franklin, Abbey Weitzeil, Lia Neal and Natalie Coughlin. I add Allison Schmitt and Shannon Vreeland who can be in the conversation too.

Dont forget Megan Romano! Throw in speedster Ivy Martin too and those six spots look like they are going to be a real battle to obtain. I think itll be one of the best races at trials!!

It will surely be a great battle for those spots next year ! Jeeeeeeeez , so much talent is coming up for Usa relays .