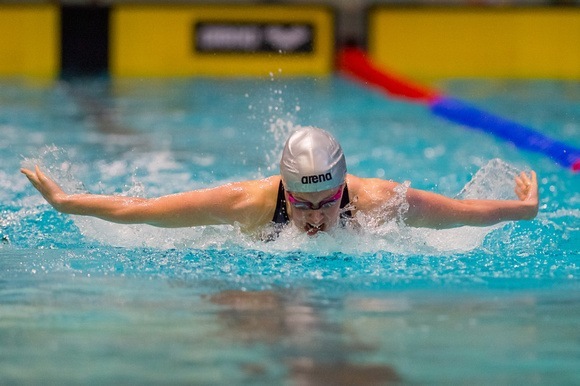 What did YOU do this weekend? Of the Manchester International Swim Meet, Hannah Miley said “It’s been a really busy but good weekend, I think I’ve raced a total of 23 races." Current photo via Credit: Ben Blackall

The City of Manchester Aquatics Swim Team hosted its very first Manchester International Swim Meet this past weekend at its Aquatics Center. A strong showing of British stars took to the pool in pursuit of not only racing preparation for the upcoming European Championships and the 2016 Olympic Trials, but also for the £10,000 ($15,400) prize money spread among the top 12 male and female athletes.

Speaking after his 1st-place winning 200m breaststroke performance, Manchester’s own Christopher Steeples commented that, “Great meet!  The atmosphere out here has been brilliant.  It’s nice to get everyone together at the beginning of the season for a quick race.  I suppose swimming in my home pool gives me an advantage, because I feel relaxed here.  I’m from Derby but I’ve been living her for about four and a half years now so it’s home,  I’ve even become a United fan.”

Teammate Rebecca Guy claimed the top prize in the women’s 50m freestyle, of which she said, “I feel pretty pleased with my 200m (freestyle) this evening as I swum a PB (1:56.69) and then the 50m (freestyle) was good as I won and that’s the aim at the end of day to touch first.It’s great to swim in our home pool, it’s kind of showing off what we are doing here, you can see the information about our team here, it’s an amazing facility and something that Manchester should be proud of so it’s nice to show it off.”

City of Sheffield Swim Squad’s Nicholas Grainger won gold in the 400m freestyle and said,“It’s been a pretty good meet, the 200m was pretty good yesterday I got a gold in that as well with a nice short course PB (1:44.89) and today’s 400m was good too.  Both days have been tough but it’s been a good challenge, the whole point of the meet is to race hard and I think I’ve done that pretty well. Rio is the ultimate goal for the season but we’ve got trials first so I’ve got to qualify before I even start thinking about it.”

Garioch Amateur Swim Club’s Hannah Miley collected golds in the 400m IM and 800m freestyle over the weekend. “It’s been a really busy but good weekend, I think I’ve raced a total of 23 races.  It’s been a fantastic event and I really feel grateful to have been here and able to race and just to get some solid work in at this stage of the season, get back into race mode.  I do love coming down here to race, it’s such a good pool, I’ve had many good swims here.”