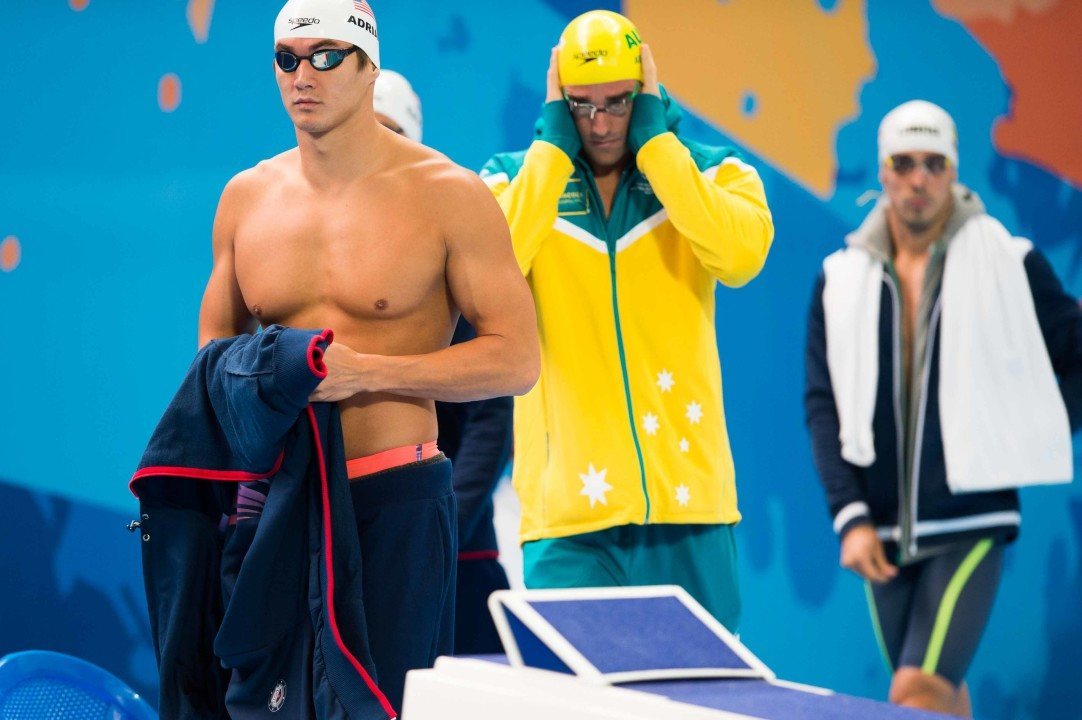 A shortened 2nd Cluster didn’t have much effect on the FINA World Cup Series, as Katinka Hosszu and Cameron van der Burgh remained atop the point stndings after the turmoil of the Singapore stop.

Finals from day 1 of the 2015 Singapore World Cup Series stop have been cancelled due to haze. The Singapore…

With the format of the 2015 FINA World Cup Series taking place in long course meters, swimmers from around the world are taking advantage of the opportunities to race internationally and bulk up their pre-Olympic Trials experience headed into 2016.  The Americans are bringing a large contingency to Tokyo on both the men’s and women’s side to face their foreign rivals.

Update since original publishing: Nathan Adrian has told SwimSwam that he will NOT be competing in Tokyo or Doha. He told SwimSwam, “I cancelled those trips. I’ll focus instead on the Minnesota Pro Swim.”

Nathan Adrian was originally on the entry lists, which would have pegged the 2012 Olympic gold medalist against former training mate Anthony Ervin but Adrian has since opted out of the meet.  Ervin is still listed in his signature events of the 50m and 100m freestyles, while also entering himself in the 50m backstroke and 50m breaststroke races. Kevin Cordes takes on an impressive breaststroking field, which includes FINA World Cup overall point leader, Cameron Van der Burgh (RSA) and fellow Americans Michael Andrew and Chuck Katis.

Cordes will also need to keep an eye on Japanese breaststrokers Koseki Yasuhiro and even Kosuke Kitajima , just as both Adrian and Ervin will need big boosts of speed as they take on a strong Japanese home favorites of Shinri Shioura and Katsumi Nakamura in the sprints. Both Shioura and Nakamura finished 1-2 with sub-49 second times in the 100 freestyle at this year’s Japan Open, with Nakamura clearing a new national record in the process.

A consistently big gun of the backstroking wold, Ryosuke Irie will be making an appearance in his prime events of the 100m and 200m backstroke, as will Australian Mitch Larkin. American David Plummer and Austrailan Ash Delaney look to make their mark against the double world champion while in Tokyo.

USA National Teamer Zane Grothe is seeded 1st in the men’s 400m fresetyle, while Tom Shields is the man to beat in the 100m butterfly at the meet.  Michael Andrew, Chuck Katis, Giles Smith and Will Copeland will also be trying to earn some prize money in Tokyo. Unfortunately for Kosuke Hagino fans hoping to get a peek into how his pre-Worlds elbow injury is faring, he is not listed on the entry sheets for Tokyo.

This meet is minus Amerian Missy Franklin, but teammate Natalie Coughlin will be on-site ready to take on Australian Emily Seebohm and Hungarian Katinka Hosszu in the backstroke events.  Seebohm has been on-fire as of late, with double-digit sub-59 100 backstroke results throughout the World Cup Series, so Coughlin will undoubtedly need to bring her ‘A’ Game to take on the Aussie double world champion.

Coughlin is the top seed in the 50m backstroke and 50m freestyle events and will race against the likes of Aussie veteran Melanie Wright and Aussie Kylie Palmer, who is making her post-doping-case debut in this meet. Palmer will be racing in the 100m/200m/400m/800m freestyle events now that she is eligible again for competition. Belinda Hocking will also be competing at the meet, which isn’t too common as of late, given her injuries.  She is registered in all 3 backstroke events.

Japanese World Champion Natsumi Hoshi is looking to exert her dominance once again, leading the women’s 200m butterfly field of both Hosszu and Zsuzsanna Jakabos, as well as USA’s Kate Mills.

Small correction to the article. Whilst Belinda Hocking DID miss the previous AUS season and 2015 Worlds team due to burns/injury; she has been back competing for some time and was one of the small AUS contingent at this years US Nationals and has competed at a couple of previous stops of this current World Cup.

Why is the top seed in the 100 backstroke and breastroke faster than the world record?

If you look at the entry list, either Japan is far deeper than I ever knew or there is something wrong with some times. Maybe some in scm?