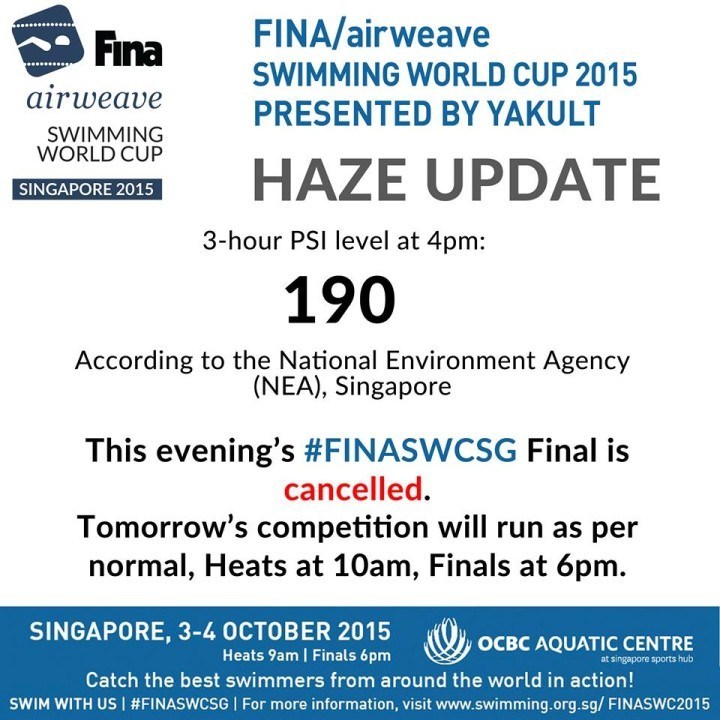 Finals from day 1 of the 2015 Singapore World Cup Series stop have been cancelled due to haze. The Singapore... Current photo via Singapore Swimming Association

Finals from day 1 of the 2015 Singapore World Cup Series stop have been cancelled due to haze.

The Singapore Swimming Association hinted that this was a possibility earlier in the week as officials be more-and-more concerned over the haze that was blowing over the country from wildfires in Indonesia.

The organization will be refunding tickets, and prize money will still be awarded based on results of the earlier stops in the series.

In a statement on the organization’s Facebook page, Jose Raymond, a vice-president of the organization, said that they will consider an opportunity to join a class action lawsuit against those burning the forests in Indonesia.

“The haze caused by the raging fires in Indonesia not only poses a threat to our health but it also destroys the months of hard work put into preparing for programmes and events like the FINA/airweave Swimming World Cup Singapore 2015 presented by Yakult which was to be held at the OCBC Aquatic Centre this evening. The investment put into the event, through sponsors, time spent by our staff and volunteers, and the effort taken by athletes and officials to travel to Singapore have been wasted beyond measurement. The Singapore Swimming Association, along with FINA deeply regrets canceling day one of the finals. On our part, the SSA will seek legal advice and may consider joining other parties and individuals in any class action suit which is brought against any Singapore-listed company which is linked to the burning of forests in Indonesia which is now causing one of the worst haze episodes to affect the region and in particular Singapore.”

FINA has also announced that prize money will still be distributed for the Saturday races that were cancelled. The fastest times from the combination of the Hong Kong an Beijing stops, plus the morning heats, will be awarded prize money as if those were the times done in the finals.

The pool in Singapore is located outside, which made the haze an even more significant issue for competitors. On Saturday morning, the measurement of haze was 172, below the threshold of 200. By 4PM Singapore time, it had risen to 190, and the organization cancelled finals then, anticipating a continued rise. By the time finals were supposed to start, the PSI level measurement became 222, validating the decision.

Hungarian Katinka Hosszu, who is the defending World Cup champion, posted on Facebook in support of the decision to cancel:

Unfortunately the finals are canceled this afternoon here, in Singapore! The PSI reading is around 200, because of the Indonesian forest fires, which is very unhealthy, so FINA decided to cancel today’s session. Hopefully tomorrow the air quality will be better and we can race!

Katinka Hosszu posted the above image on her Facebook page after the announcement that finals would be cancelled on Friday.

No announcement has been made about Sunday’s 2nd day of competition.

Very irritating to be disturbed by the videos of Universal Sports with the sound on the right of the page every time we read an article. Irritating and useless.