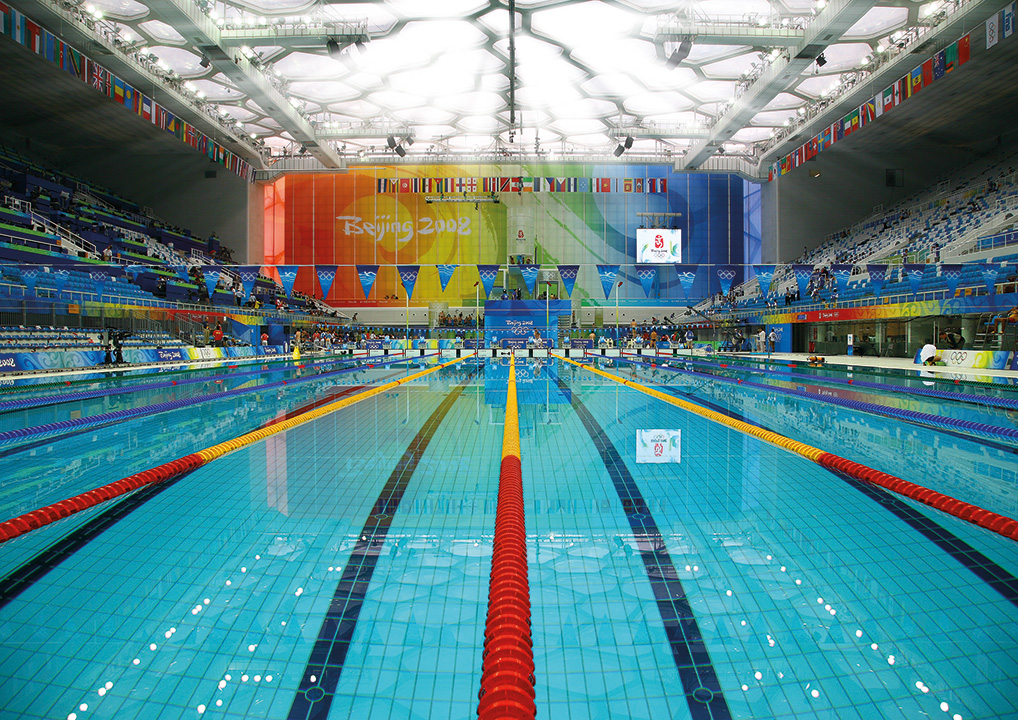 Over the years, Malmsten has taken part in ten Olympic Games, and the company has been the primary lane line partner for seven. Current photo via Malmsten

This meet, a high school dual, was a particularly fast one, with multiple Futures cuts and one Junior National cut earned there.

Lane lines are a part of swimming life. They must be continually installed in the pool and then removed. Some team members contribute more to this ritual than others. Swimmers also know that lane lines provide an object to pull on during backstroke sets, and coaches watch out for this sneaky maneuver. Lifeguards can be heard using the phrase “please get off the lane line” all too often. Despite all this, few members of the swimming community have probably given much thought to the effort involved in designing and producing lane lines.

Malmsten, an aquatic supply company founded in Sweden in 1974 by Tommy and Margareta Malmsten, has been involved with Olympic lane lines since the 1976 Montreal Games. Over the years, Malmsten has taken part in ten Olympic Games, and the company has been the primary lane line partner for seven. The 1980 Moscow Games were the first of seven Olympics — so far — for which Malmsten designed, manufactured, and shipped the lane lines to the Olympics.

However, Malmsten’s first product was not a lane line, but rather another piece of swimming equipment: goggles. In the 1970s, Tommy Malmsten was the head coach at a successful swim club in Sweden. One of his top swimmers was allergic to neoprene, a component in available goggles, and without alternatives she was at an impasse.

Unwilling to accept that nothing could be done, Tommy Malmsten set out to design a new pair of neoprene-free goggles. Before long, with some creativity and help from others, Tommy and Margareta Malmsten were sitting around the kitchen table assembling the first pairs of now-famous “Swedish goggles.”

But the innovations did not stop after this first breakthrough. Tommy Malmsten’s club team was training at a small pool shared by both competitive and recreational swimmers. When both groups were in the pool together, the excessive waves caused problems for everyone.

Once again, Tommy Malmsten began searching for a solution, which led him to a company called Kiefer McNeil that produced lane lines in the United States. After speaking with Pete Rademacher, the president of Kiefer McNeil at the time, Tommy Malmsten was able not only to fix the wave problem at the local pool, but also to form a long-lasting partnership.

In 1987, Kiefer McNeil sold its swimming equipment business to Richey Industries. All the while, Tommy Malmsten had aspirations of designing a new lane line that reduced wave turbulence more than ever before. After all, he first became involved in the industry to limit wave disruption at his local pool, and he wanted to see how much more he could achieve.

Tommy Malmsten revolutionized lane lines by proposing a new design featuring discs that are six inches in diameter. In order to have his design approved, he needed permission from FINA to change the existing rules that require lane lines to have a four-inch diameter. With FINA’s permission, Malmsten’s innovative lane line design was used in the pool at the 1992 Barcelona Olympics.

“In 1992, we received the FINA approval for changing the diameter, and we sent our Malmsten Gold Racing Lane Lines to Barcelona,” explain Tommy and Margareta Malmsten. “This is an especially emotional memory for us all. Tommy’s own design in the Championship pool, and many records being broken.”

In order to achieve a new lane line design that significantly reduces wave turbulence, Malmsten collaborated with academics conducting work in related research areas. One such collaboration was with Professor Kuttenkeuler at the KTH Royal Institute of Technology, who studies the ocean shipping industry and harbor protection efforts.

Working with researchers, Malmsten was able to develop software that could measure and analyze wave turbulence to determine their lane lines’ effectiveness. Throughout the process, Malmsten has also been inspired by observing ocean life and considering how natural elements, such as seaweed and coral reefs, are able to dampen waves.

In all of its decisions, Malmsten considers environmental impacts and sustainability every step of the way. Malmsten’s buildings in Sweden have been outfitted with solar panels to help reduce the company’s carbon footprint. The plastic materials used for lane lines are tested and safe, and the company is able to reuse residual materials. Additionally, the lane lines are durable and have a long life span. When the lane lines are eventually past their prime, they can be recycled. Finally, to decrease the environmental impact of long-distance shipping, Malmsten is opening a location in the U.S.

Malmsten’s U.S. operations will be headed up by Mikael Orn, who holds the title of CEO at Malmsten Inc. Orn was a competitive swimmer coached by Tommy Malmsten, who went on to compete for Arizona State University. After winning the 200-yard freestyle at the 1983 NCAA Championships, Orn won a bronze medal at the 1984 Olympic Games as a member of Sweden’s 4x100m freestyle relay.

Despite his NCAA and Olympic success, Orn was not always a strong swimmer. In fact, it took him three summers to be able to swim 25 meters continuously, and even then he was almost swimming vertically across the pool. At one point, “The instructor told my parents that I would never learn to swim,” recalls Orn. For Orn, this experience from slow learner to Olympic medalist taught him that “You want to dream big, and with perseverance you can make it.”

Orn hopes that hard work and dedication will pay off in the American market as he brings Malmsten’s renowned lane lines and aquatic supplies to the U.S. Having partnered with Kiefer McNeil and Richey Industries all those years ago to provide lane lines to the European and American markets respectively, Malmsten is now taking on both geographic areas themselves. Tommy and Margareta Malmsten hope that this decision will help bring more Malmsten lane lines to American pools, noting: “Even if you cannot have an Olympic Games in your pool, you can have Olympic Racing Lane Lines.”

Given that Malmsten first started as a family business back in 1974, it is fitting that Orn is leading the company’s new U.S. location. Although they are not related, Orn and Tommy Malmsten have remained close since they worked together as swimmer and coach. “We had a great coach–swimmer relationship, but beyond that he was really more like extended family to me,” says Orn. Malmsten began as a family business where those who are passionate about swimming could create products specially for swimmers. It continues to stay true to its roots today.

Malmsten is a SwimSwam Partner.

This feature first appears in the 2021 Olympic Preview issue.