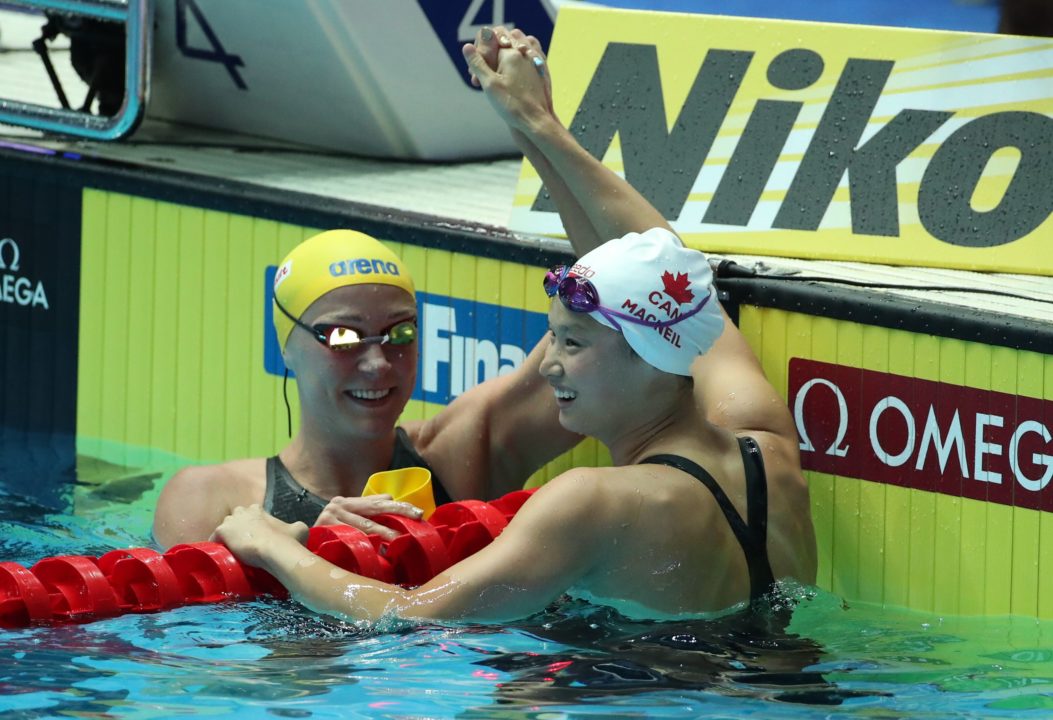 The 19-year-old clocked a time of 57.64 to overtake Russian Arina Surkova (57.78) for the top time in the world for the 2019-20 season. Archive photo via Swimming Canada/Ian MacNicol

After cruising to the top seed in the prelims, reigning world champion Maggie MacNeil was over a second faster to win the women’s 100 fly final tonight at the Greensboro Pro Swim Series, clocking a time of 57.64.

That swim puts the 19-year-old first in the world this year, surpassing Russian Arina Surkova‘s 57.78 from the Kazan stop of the FINA World Cup last weekend.

16-year-old Torri Huske was the runner-up to MacNeil in the event, touching in 58.32 to slide into sixth in the world. Hungarian Katinka Hosszu put up what is now the world’s fifth-best time earlier today at the World Cup in Doha.

This long course performance comes on the heels of MacNeil’s incredible 49.57 yards swim at the Michigan Intrasquad meet three weeks ago that was the fourth-fastest in history and is currently the top time in the NCAA by a full 1.55 seconds.

Currently a sophomore with the Wolverines, MacNeil also established a new in-season best time tonight, edging out her 57.66 from the Counsilman Classic in June. Adding to the accolades, the swim was also a new pool record, dipping under Amanda Kendall‘s 57.80 from last year.

The native of London, Ont., has had an unbelievable 2019 calendar year, first having a sensational freshman campaign in Ann Arbor that culminated with a runner-up finish in the 100 fly at the NCAA Championships, and then following up by winning gold at July’s World Championships in the 100 fly.