How to Watch the 2019 Pro Swim Series – Greensboro This Weekend 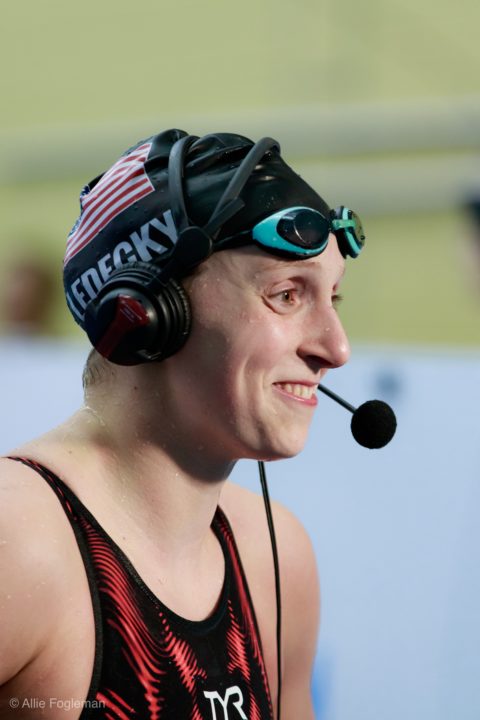 Katie Ledecky (above) is one of a number of stars scheduled to race this weekend in Greensboro. See how to watch the meet here. Archive photo via Allison Fogleman

NBC and USA Swimming will continue their strategy of splitting the webcast between two different feeds this week in Greensboro as they kick off the 2019-2020 Pro Swim Series.

The one exception is Thursday, November 7th, where the full finals session will be watchable on USASwimming.org. Because NBC is not televising that session, there is no need to split the stream.

The finals sessions for Friday and Saturday (November 7th and 8th) will be televised, with Friday airing on the Olympic Channel and Saturday on NBC Sports.

The full coverage schedule, both on television and on the internet, is below:

Is it just my computer, or are there several misidentified races at the “Live Results” site? For example, when I click on the “#10 Men 200 Fly Prelims” link, I get the results for, “Event 10 Men 400 LC Meter Freestyle.”

No swim squads this year?

They were barely tracking them by the end of last year lol. We sometimes had the standings out weeks before they did. They couldn’t figure out how to make people care.

It was dumb lol

Close the bars down Abe is coming to town

Wow, is there anything Luca Urlando is not swimming?

The most mystery and interest for me in women swimming are Regan Smith’s other than backstroke events. She began actively swimming them this season and made several promising personal bests. Is this just reflection of her being in excellent form resulted in mind blowing records or this outstanding swimmer is up to something even more spectacular. Unfortunately we want see her this weekend. Ok, maybe next time we will get some hint about her plans and targets.

She isn’t swimming it.