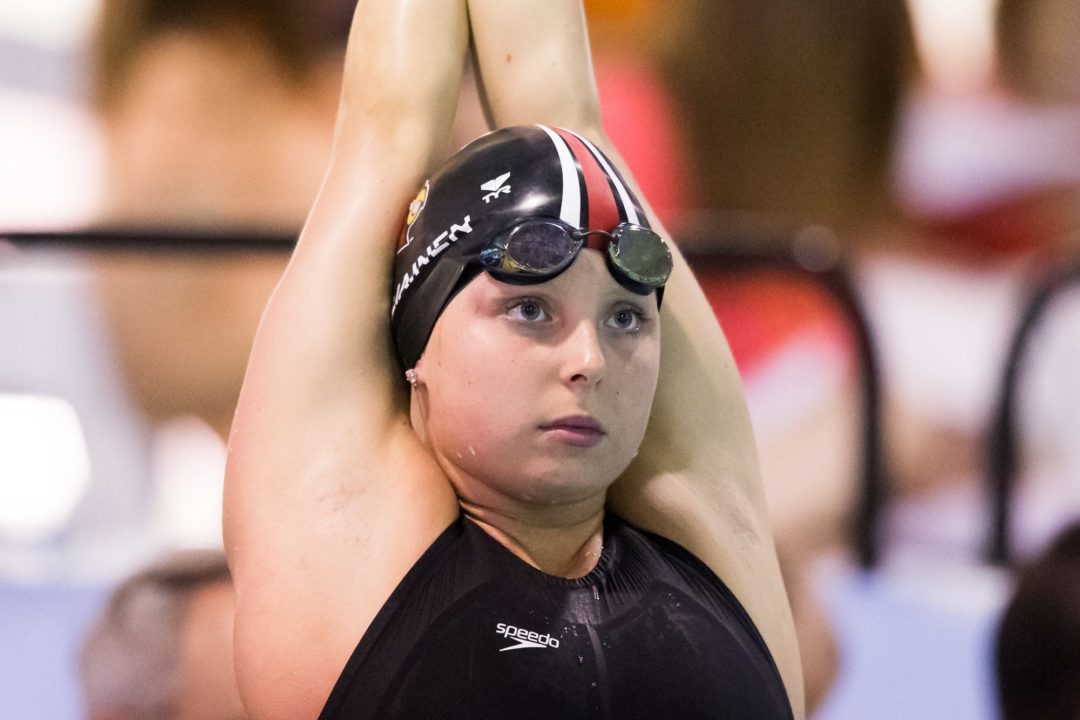 The Louisville men swept the meet and the women won 14 of 16 events in an early tune-up for three AAC teams at the venue that will host the AAC Championships. Archive photo via Tim Binning/TheSwimPictures.com

It was a great day to be a Cardinal during their tri meet AAC matchup with Cincinnati and Houston today in Louisville.  With both the men and women’s teams running up the scores, they proved to stay true to their midseason Power Rankings (men 11th and women 16th).

Head coach Arthur Albiero called the win “a total team effort”.  With the meet including three teams instead of the regular two, there was an opportunity for more swimmers to get involved.  “Whether you’re on the E-relay today or in the C-heat, it doesn’t matter, you have a role to play on this team and we certainly expect you to do it”.  Albiero’s expectations were exceeded today with the performances his teams put on.

While Houston and Cincinnati may not have dominated in the way the Cardinals did, there were some great in season performances for each team.  The Lady Cougars showed their strength in the diving events going 1-2 in the 1 meter with Danielle Shedd and Taylor Olanski.  Olanski would go on to add a second place finish in the 3 meter.  The highest place the Lady Cougars could secure in the pool were Heather Winn and Lindsay Schultz‘s fourth place finishes in the mile and 100 free respectively.

The Bearcats were able to scrape out an individual victory in the women’s 200 free.  Freshmen standout Jackie Keire blazed a 1:48.49 to secure the win.  She just missed doubling her win total in the 100 free, falling to Worrell by .55 seconds (50.01, 50.56).  Jessica Piper was also able to add to the point total, notching a second place finish in the women’s 200 back with a time of 2:03.64.  Unfortunately, the Louisville men’s depth proved to be too much for the men of Cincinnati to handle, getting only one top three finish in the meet from Joe Bott in the 1650 free.

While Louisville was crowned victorious, the other teams got valuable experience in the pool where AAC Championships will be held. Ralph Wright Natatorium will be the site of the championship meet in February, where we will be sure to seem some fast swimming.

Live results can be viewed here.