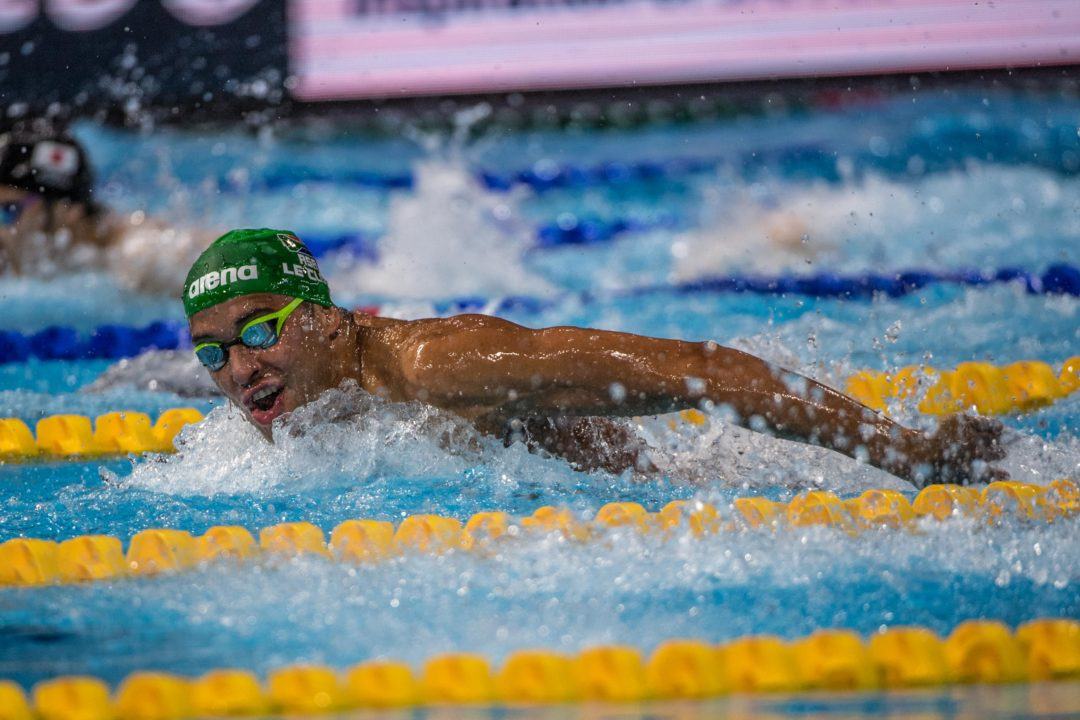 FINA has announced that its 2018 World Cup series will integrate long course meters stops in with its traditional short course meters format. The tour has dropped from 9 to 7 stops and scoring entries will be limited even further, to just 3 scoring events per swimmer. Archive photo via Mike Lewis/Ola Vista Photography

FINA has announced that its 2018 World Cup series will integrate long course meters stops in with its traditional short course meters format. The tour has dropped from 9 to 7 stops and scoring entries will be limited even further, to just 3 scoring events per swimmer.

Traditionally a 9-stop tour divided into three clusters, the 2018 series will feature just 7 stops, one of which is not yet finalized. That’s significant after one of the 9 stops was abruptly dropped late last summer, shuffling around the order of the rest of the tour. That stop, Dubai, is not included on this year’s tour.

The series will return yearly stops in Doha, Beijing, Tokyo and Singapore, with the additions of Kazan, Russia (which replaces the usual Moscow meet) and Budapest, Hungary – interestingly enough, the hosts of the two most previous long course World Championships meets.

Kazan and Doha will make up the first cluster, the unannounced location and Budapest the second cluster, and Beijing, Tokyo and Singapore will host the third cluster.

In addition, FINA appears to be doubling down on one of its more unpopular rule changes from last year, with a bit of a twist. Last spring, FINA announced a wave of sweeping changes, including a cap on event entries per swimmer per meet. Swimmers were only allowed 4 entries per meet, causing a strong negative reaction from multi-time series champ Katinka Hosszu and her coach Shane Tusup. The two had made $300,000+ on a yearly basis through Hosszu’s ability to swim often seven or more events at World Cup stops, earning prize money and points in all of them.

This year, the strict cap will actually be removed – athletes are free to enter as many events as they wish. However, only the three best events will count for scoring purposes. There’s no clear indication yet as to whether athletes can still win prize money in more than 3 events, but FINA’s press release makes clear that only the top 3 events will be eligible for “ranking/scoring” purposes.

In theory, that should make the World Cup points race closer and more dramatic, plus open up the points title to more single-stroke competitors who could dominate 3 events but could never contend in a wide enough range of events to previously crack the top of the point standings. On the other hand, it continues to limit hyper-versatile athletes like Hosszu.

You can read FINA’s full press release on the subject here.

The problem with the World Cup has everything to do with scheduling. Until there are dramatic changes we will continue to see weak fields, little atmosphere and virtually zero media interest. For the last few years it has been a Katinka Hosszu / Chad Le Clos benefit series thanks to most big-name swimmers giving it a big miss. A limit on the number of events counting towards prizemoney makes sense given the very limited pool of money available.

I think you can make money in every single events you”ll swim but only the best 3 (according to FINA points) of each swimmer will count for ranking/point scoring. And the heats are mandatory again.