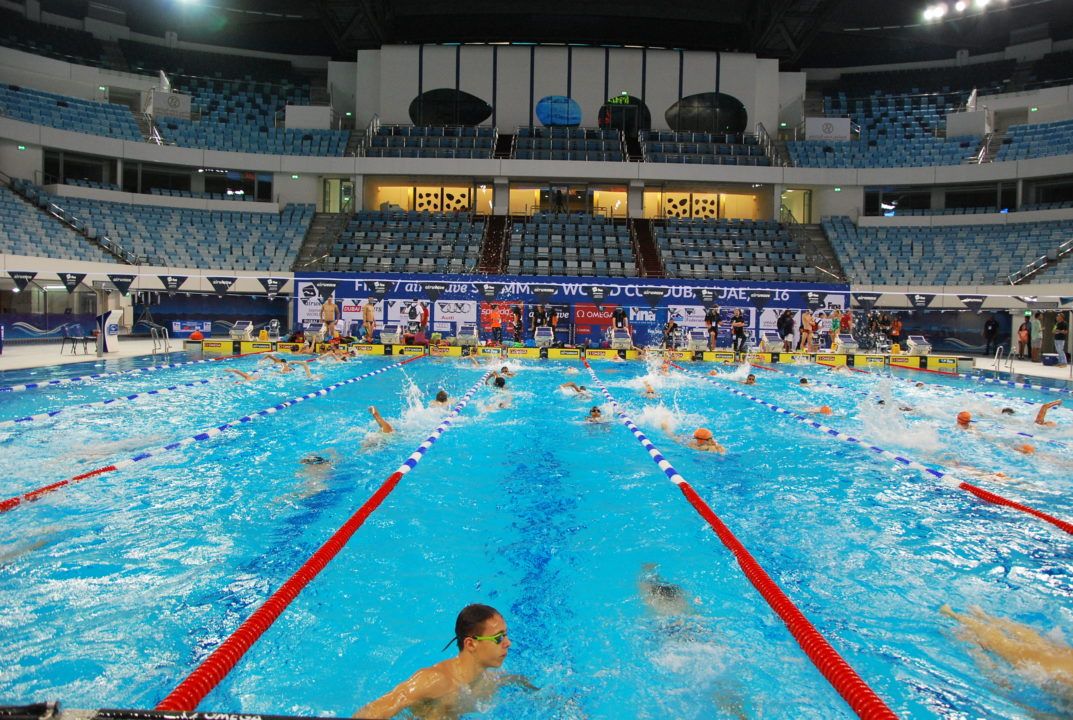 FINA has dropped the Dubai stop from the 2017 World Cup series and shifted the date of the Doha event, with some format changes still being adjusted for the tour's second cluster. Archive photo via Daniela Kapser

FINA has dropped the Dubai stop from the 2017 World Cup series and shifted the date of the Doha event, with some format changes still being adjusted for the tour’s second cluster.

FINA officials announced the removal of the Dubai stop at the technical meeting in Eindhoven today, and the FINA website now lists the World Cup schedule without Dubai and with Doha moved back by about two weeks. Doha was set to be the first meet of Cluster 2, taking place on September 22-23, followed by Dubai on September 26-27 and Hong Kong on September 30-October 1. Now, Hong Kong will remain in its same date, but will begin the cluster instead of ending it. Dubai has been cut from the lineup and Doha will take place on October 4-5.

The removal of Dubai will also create some wrinkles with the much-discussed new World Cup format in which each of the three meets in each cluster has its own unique event lineup. Each individual event is set to appear at two of the three meets in each cluster. FINA is currently working on finalizing a new event lineup for Hong Kong and Doha that will get every event into the cluster twice. One possibility could be returning to last year’s event lineup, which featured every race over the two days.

According to sources in Eindhoven, the Hong Kong and Doha meets will also have the entries-per-athlete cap raised from 4-per-meet to 6-per-meet to account for the absence of Dubai’s meet.

Just follow the political situation and appreciate that there are currently no flights between Doha and Dubai.
Dubai made a “scratch” !

FINA did not “drop Dubai ” but the latter withdrew – and there is no “reserve “. !

Its about the Orb . For those who missed it – lucky you , the rest of us have been traumatised .The jolly atmosphere soon evaporated & we have a mini war where Gulf countries attempted to take out Qatar accusing it of supporting terrorism .This of course they do along with the rest of them . Until Rex Tillerson intervened , the US was also accusing Qatar until some bright spark remembered the huge US air base in Qatar from where they launch ops . Its very odd to threaten a country where you have an offensive base but it is DC Comics Pty Ltd .

I posted this information last week when swimswam was commenting on World Cup but never put on site. Just needed to look at dates on fina website. Dubai swimming federation head has changed which lead to withdrawal. Live in Qatar. We knew about this 2 weeks ago.

If every distance will be on the schedule it will be a decent compromise to make sure that every event is swam the same amount of times(6) during the circuit.