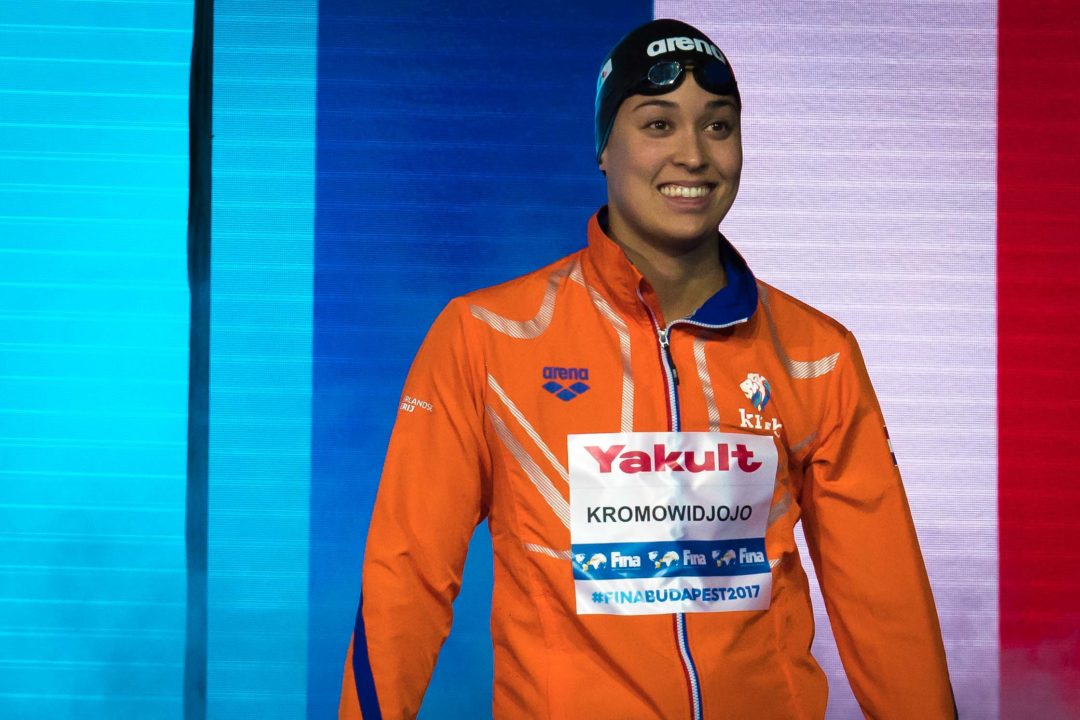 Already a multiple Olympic medalist, 26-year-old Ranomi Kromowidjojo of the Netherlands could retire today with a successful, storied career behind her; one that includes golds in the 50m and 100m freestyle events at the 2012 Olympic Games in London alone.

However, ‘Kromo’ continues to get faster, as evidenced by her recent short course meters World Record in the 50m freestyle in Berlin. While competing at the World Cup stop in the German city, Kromo notched 22.93 to become the first woman ever to dip under the 23-second threshold in the event.  This is after she already nabbed silver in the women’s 50m butterfly and freestyle races at the 2017 World Championships in Budapest, the latter in the fastest time ever registered by a Dutch woman.

Kromo spoke to the press ahead of the two-day World Cup meet kicking off in Eindhoven tomorrow, where the multiple national record holder confirmed she is indeed all-in for Tokyo 2020.

“I thought it would be more difficult to keep going, physically, but I’m still standing,” said Kromowidjojo. “I said I would continue until the World Championships in Budapest, and after that I would decide whether to keep swimming, but I knew before Budapest that I would.”

“So I decided today, because there was a press conference, that I would tell everybody, and then the word is out. That way, nobody is talking about my last races coming up and putting pressure on me. I really love swimming, and love improving at it, getting better every day.”

Kromo says she still, ‘enjoys swimming’ and hopes to continue to swim ‘better than ever’. She is looking forward to her journey, stating, ‘the next 3 years will be fun.’

Great for her. What I found amazing is that Kromo swam a near PB in the 100 free in
Budapest, but did not medal. The women’s 100 free is really taking off. The 53.00 she swam in London to take the 100 free title isn’t going to cut it anymore.

I think the women’s 100 Free explosion is due to Simone/Penny’s joint gold that took down Cate. They kind of helped to break the mental barrier many women had about 52s and beating Cate after her WR. And after those incredible swims in Budapest, I’d expect an even faster 100 Free in a few years. I think 52 will be more common, and more girls will get under 52.5.

Lets just wait and see what actually plays out. Who else do we have as prospective members of the sub53 club let alone sub52.5 ? Looking at sub52.5; C1 COULD return to that level but that’s no certainty let alone getting down below 52. Comerford & Oleksiak look the most likely. Blume … a maybe but she is probably still optimised for 50. C2 …. some possibility but that would be contingent on her getting her shoulders properly sorted. WILL SS actually be swimming to her 2017 level over the next couple of years ? How many of the current sub53club (52high contingent) are probably maxed out at their current PB’s ? I would have to say … at least… Read more »

The capacity for longevity in the sport has any number of factors. – the desire to continue competing at the top level – the physiology of the individual in question and the impact of whatever injuries they may have sustained over their career. – their life outside the pool and whether this allows them to continue to compete. Do they have professional careers outside swimming ? Do these careers preclude a continued swimming career and even if “employer supportive”, do they suffer in a professional sense ? – the $$$$ issue. Can they continue to afford to swim at the top level given there still is no real pro circuit ? What is the funding situation in their particular country… Read more »