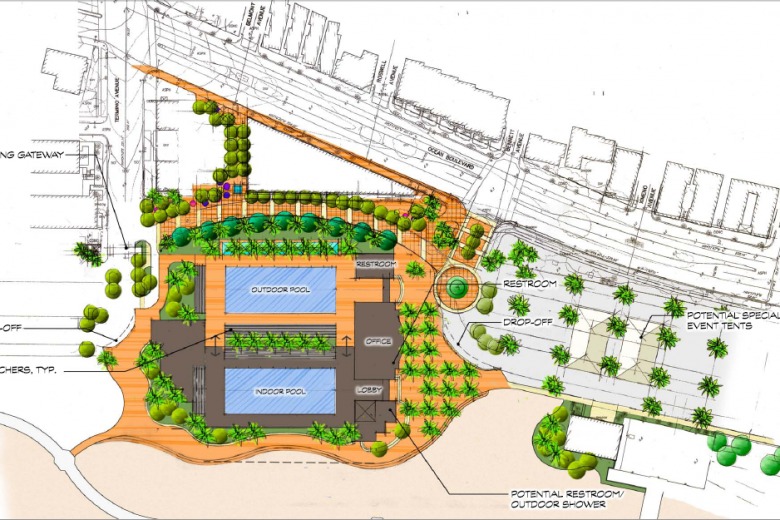 The City of Long Beach, California has published to requests for contractors to work on their nearly $70 million replacement...

The City of Long Beach, California has published to requests for contractors to work on their nearly $70 million replacement for the Belmont Plaza Olympic Pool.

The project involves the replacement of the historic Belmont pool, which is so important to the competitive swimming infrastructure in California, that was permanently closed earlier this year after it was found to be “seismically unsafe,” in addition to several other needed repairs.

The city has budgeted $62 million for the rebuild, and an additional $4 million to construct a temporary outdoor 50-meter pool in its place. The costs, while lofty, are at least partially justified by the amount of traffic that Belmont gets in any given year. This past season, when the pool was closed just months before the collegiate championship season, a number of conferences had to scramble into other pools of sufficient size. The number of competition-quality, indoor venues (especially of the 50 meter variety) in the aquatic-crazy state of California is extremely limited.

The first is a Request for Proposal for Project Management Services for the Belmont Plaza Pool Facility Rebuild/Revitalization Project. Both proposal periods are open until 11AM Pacific Time on July 25th.

The request begins to more clearly design the goals of the new facility as follows:

The City has defined the project site, functional components, and has identified the preliminary programmatic elements for the Long-Term Belmont Plaza Pool Facility. The proposed redevelopment of the Belmont Plaza Pool Facility requires a careful balance between broad based recreational and specialized competitive opportunities. The new Pool facility will be located in the approximate location of the existing Belmont Pool facility, and a proposed outdoor pool will be sited immediately north of the existing facility (please see Exhibit C: Location Map & Exhibit D: Proposed Site Plan Concept). The proposed Project is intended to host all competitive swim, water polo, and platform diving events that are currently hosted (local/regional/national) with the ability to host collegiate and international water polo competition, and meet current and future competitive swimming regulations, while providing added water space to enhance the experience of all users.

This proposal, which is largely, but not entirely, administrative detail about the bidding process, includes the best information yet about what the new Belmont will look like. It will include an indoor 50 meter pool and an outdoor 50 meter pool, and be located at the corner of Ocean Boulevard and Termino Avenue, which is the same location as the current pool.

The primary difference would be in the configuration. More of the primary Belmont Plaza footprint would be taken up by parallel 50-meter pools, as compared to the current setup that has the indoor 50 meters, with a park next door, and smaller, adjacent pools to its east. The two pools would now be located more conveniently to each other, and more of the outdoor space would be moved to the east, which should make the facility more functional for hosting large events that would include a need for a sponsor area.

The other new request put out by the City of Long Beach is an Invitation to Bid for the installation of a temporary outdoor pool. The winning bidder has been allotted 100 days to complete the project after the city gives its official go-ahead, which means that the pool could be done in time for winter championship meets, with an assumed completion time likely by the end of 2013.

The temporary pool is to be constructed in the parking lot of the existing Belmont complex.

The city made several attempts to repair the pool unsuccessfully before finally deciding to replace it this year.

See the requests below for more information:

Can’t wait! The Belmont Plaza Pool was dirty, dirty, dirty and needed to go. Back in it’s heyday it was a jewel, but now needs to go. Maybe Long Beach can finally live up to its stature as the “Aquatics Capitol” of the United States. Really looking forward to this!

Can’t wait! The Belmont Plaza Pool was dirty, dirty, dirty and needed to go. Back in it’s heyday it was a jewel, but now needs to go. Maybe Long Beach can finally live up to its stature as the “Aquatics Capitol” of the United States. Really looking forward to this!

Well, maybe you could developed a better swim team, its located nicely in La County next to also Orange County.

Sorry, Cynthia. Could you be more clear? I know where the pool is and the history with the swim teams. I should considering I live down the street from the Plaza and have swum there for years. I know all about Phillips 66 and Long Beach Swim Club and Beach Aquatics. So be more clear. I know that the pool is minutes from Seal Beach and the Orange County line. So again, be more clear. And I also know that the pool and locker rooms are old and tired and not the cleanest. Again, I am excited for the change and bringing back the “old aquatics glory” to Long Beach. I remember the Plaza hosting NCAAs, Olympic Trials, Nationals as… Read more »

Will any club or college teams train here or will it be a strictly city-run recreational pool?

C Martin – I haven’t heard an answer to that yet, but we’re in contact with some folks who are pushing this issue through, and I’ll reach out and ask.

It sounds like there will be a home club. Beach Aquatics, which is the modern incarnation of the old Phillips 66 club, is the home club technically. It’s not 100% clear who the home club(s) will be in the new facility, but it will be someone.