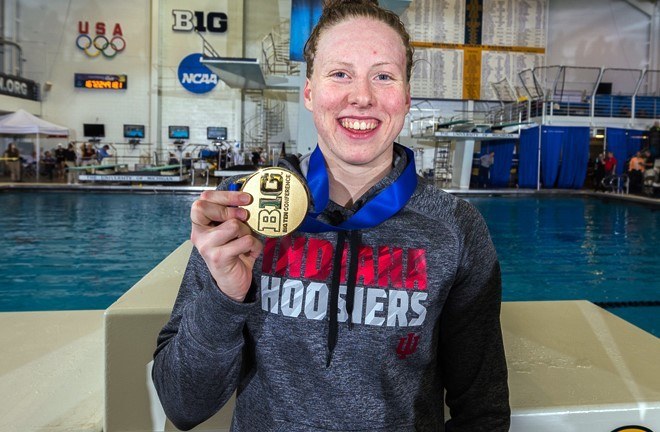 Two-time NCAA Champion Lilly King has been named Indiana University’s Athlete of the Year. Along with men’s basketball senior guard Kevin Yogi Ferrell, King has been recognized by the IU Department of Athletics for her accomplishments in just her freshman year as a Hoosier.

Said IU Vice President and Director of Athletics Fred Glass of King’s and Ferrell’s achievements, “Yogi Ferrell and Lilly King are champions and record setters whose performances this past year make them more than worthy of joining the ranks of our legendary athletes who have earned our Athlete of the Year award. Reaching our highest athletic potential and winning championships is a top priority, and these great athletes who performed spectacularly for two of our most honored programs are tremendous representatives of our championship heritage. Congratulations to both Yogi and Lilly on being named IU Athletes of the Year.”

Reflecting on King’s season, Head Coach Ray Looze said, “Lilly King had one of the most impressive freshman seasons in NCAA history. The best part about Lilly is how good of a person she is on a daily basis: team oriented, competitive, and she always puts the team goals ahead of individual ones. She has a very bright future and significant room to improve. It will be exciting to see where she can take her swimming career at Indiana.”

Evansville and Reitz Nation are so proud of you, Lilly!

Congratulations Lilly! You deserve this award. We will enjoy being with you at Trials and in Rio. This is fun!

Hoosiers on the Rise.
Great job Ray and staff!

Good luck, Lily!
It’s amazing that you can become so great, and you have great chance to win gold in Rio!
As a college swimmer, you have so much disadvantages! And you overcome them all, and beat all those professional swimmers who have all the advantages!