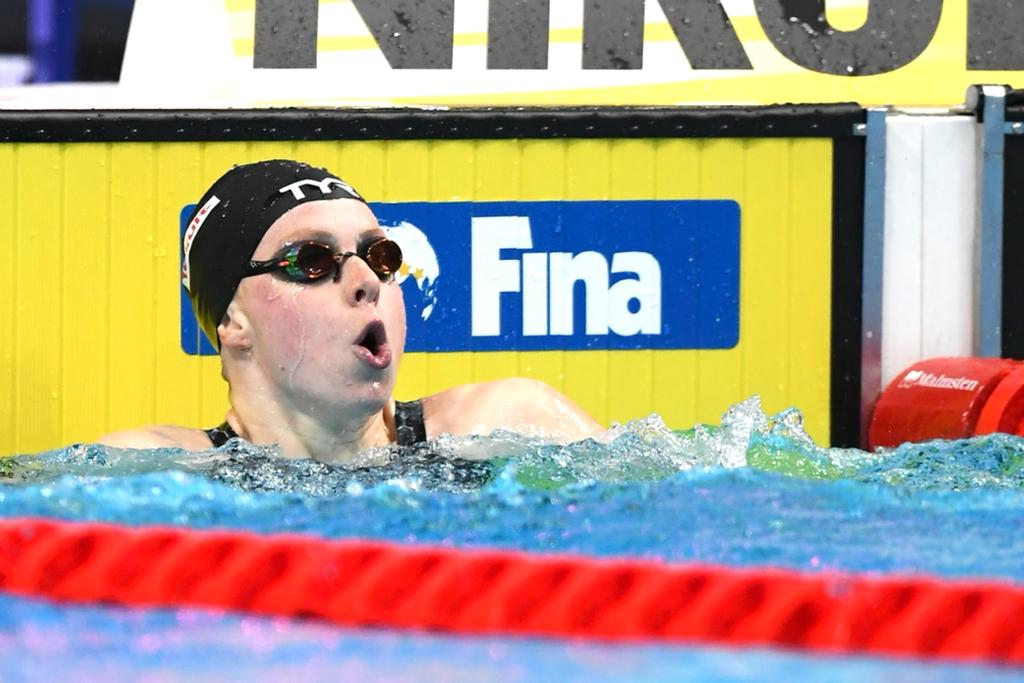 King becomes just the second swimmer in history to win the 50, 100 and 200-meter race of the same stroke at the World Championships. Current photo via Fabio Cetti

Lilly King added a unique piece of history to her resume on Thursday night at the 2022 World Championships in Budapest, as she claimed gold in the women’s 200 breaststroke in a time of 2:22.41.

King’s victory was her first in the event, and gives her the career set, having won titles across the 50, 100 and 200-meter distances at the World Championships.

King won the women’s 50 and 100 breast at both the 2017 and 2019 World Championships, and will have the opportunity to three-peat in the 50 on the final night of competition in Budapest on Saturday.

The 50/100/200 accomplishment makes King the first American swimmer to do so in history, and just the second of all-time (only factoring in 50, 100 and 200 of the same stroke for each swimmer).

The only other to win all three distances is her Russian rival Yuliya Efimova, who had a memorable showdown with King at the 2016 Olympics in Rio.

King has been knocking on the door in the 200 breast for years, and finally gets over the hump with the victory here after setting a lifetime best in last year’s Olympic final, winning silver behind South African Tatjana Schoenmaker.

King was 12th in the women’s 200 breast at the 2016 Games, fourth at the 2017 World Championships, and then was disqualified for a non-simultaneous touch in the prelims at the 2019 Worlds.

Then came the Tokyo Olympics, where King had a phenomenal swim in the final, breaking the 2:20-barrier for the first time (2:19.92), but fell to Schoenmaker, who broke the world record in 2:18.95.

Things didn’t go well early on during these 2022 championships for King, as she missed the podium in the 100 breast as the defending two-time champion.

After the race, her head coach at Indiana University, Ray Looze, said she was competing in Budapest “at 80% of her capability,” with sources later confirming she was dealing with COVID-19 prior to the meet.

Despite that, King managed to secure the victory on Thursday in the 200 breast final, moving up from fifth at the final turn to win in a time of 2:22.41. While it was well off her best time, and the event’s slowest winning time since 2003, it gives her a unique piece of history.

The two men who have come closest to achieving this feat are fellow breaststrokers Brendan Hansen and Kosuke Kitajima, who both won titles in the 100 and 200 breast but had their best finish come in second (Hansen, 2007) and bronze (Kitajima, 2005) in the 50 breast.

At the Olympics, Pieter van den Hoogenband owns golds in the men’s 100 and 200 free and a bronze in the 50 free. Emma McKeon and Sarah Sjostrom are two recent female swimmers who have won a medal at the Olympics in the 50, 100 and 200-meter freestyle distances.

I love Rowdy Gaines but can someone please tell him to retire?

His shrill, cracking voice, gets worse every meet…

I was never a big fan of Lily King prior to last Olympics, thought she had a superiority issues, but after Tatjana’s WR in the 200 breast in the final in Tokyo, she was jumping for joy for Tatjana’s achievement even though it came at her expense, huge respect now.
No Murphy is a different kettle of fish.

Yes I know there are plenty of them.

Watched a little of the swim swam watch party. Don’t think they even said Jenna Strauch’s name at all. Just the “Australian” was mentioned. She won the silver medal. What the? Plus ZSC was also called the Australian a few times. They have names people even though they are not American.

But what we really want to know is did Lilly find 13-year-old Moon Sua of South Korea and take a picture with her?

She found her and spent a good hour convincing her to switch to butterfly and IM. j/k

Didn’t Rebecca Soni sweep all three once? Or was that short course?