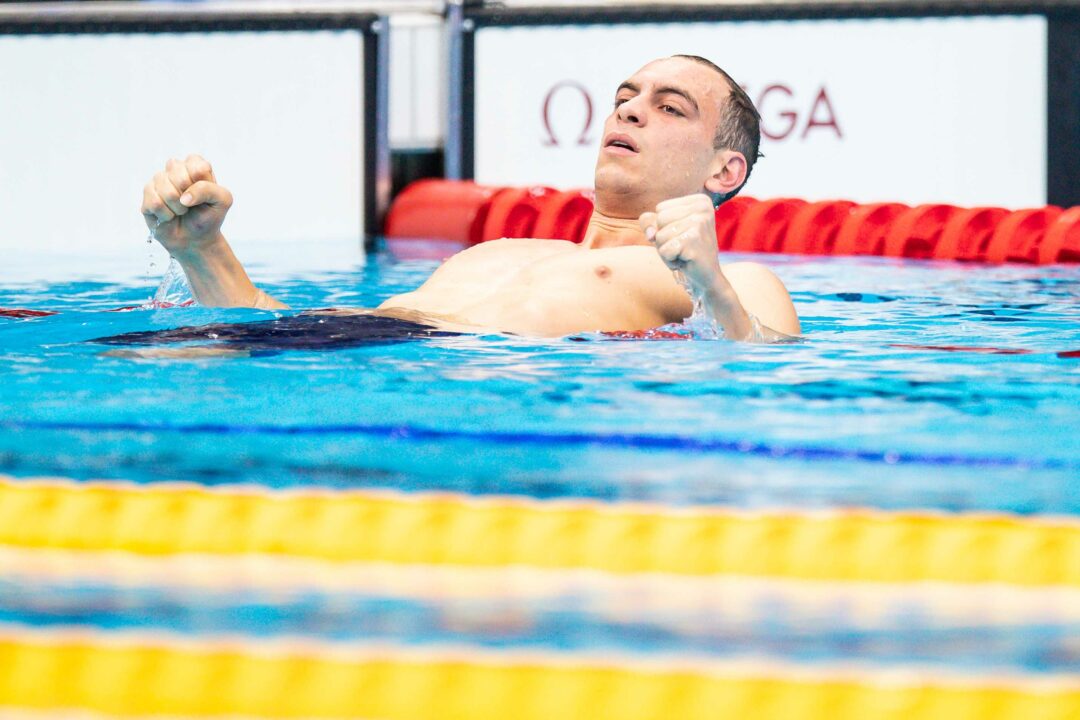 The 4th-place Brazilian men barely missed the podium in Thursday’s 4×200 freestyle relay final, but they did break their own South American record from prelims (7:06.98) by more than two seconds with a 7:04.69. It also marked the best finish in the event at Worlds for Brazil, which had never even made the finals until placing 6th in 2019.

Brazil showed off its depth as all four swimmers – Fernando Scheffer, Vinicius Assuncao, Murilo Sartori, and Breno Correia – dipped under the 1:47 mark for the first time as a team. Assuncao was the lone new member from the Olympic squad that placed 8th in Tokyo with a disappointing 7:07.73.

Scheffer, the reigning Olympic bronze medalist, led the quartet with a 1:45.52, less than a second off his South American record (1:44.66). Then came Assuncao (1:46.44), a rookie who swam the fastest leg on Brazil’s 4×100 freestyle relay (47.63) on Saturday after qualifying as the fourth member of that team at April’s Brazil Trophy (48.81). Sartori, the youngest of the bunch at 20 years old, went next with a 1:46.34. It ended up being the second-fastest split on the team after Sartori was the only one over 1:47 in prelims. Correia closed with a 1:46.39, more than a second faster than his season-best 1:47.95 heading into the meet. It marked a rebound of sorts for Correia, who split 1:48.11 in the Olympic final, more than a second slower than his prelims time.

The Brazilians would have won a medal to go along with their new continental record if it wasn’t for a ridiculously fast anchor leg by Great Britain’s Tom Dean. The reigning Olympic champ clocked a 1:43.53 to pass Correia and steal the bronze medal .69 seconds ahead of Brazil. Entering the final leg of the relay, Brazil was more than two seconds ahead of the 5th-place Brits.

There’s still time for this young group of Brazilians to bring home some hardware in the future. Scheffer is 24 years old with no signs of slowing down, and the other three members of the team are 23 or younger.

Before the morning prelims, the South American record was also held by Brazil, which posted a 4:07.12 at the 2019 World Championships with Scheffer and Correia also on that team. The two other swimmers on that squad finished with splits over 1:47.

The new standard represented the third South American record set at Worlds after 23-year-old Brazilian Guilherme Costa reset the continental marks in the 400 free and 800 free earlier this week.

The Korean squad also improved on its national record from prelims with a 7:06.93, about a second and a half faster than their morning mark. Paced by 19-year-old Hwang Sun-woo, the world junior record holder who just won his first Worlds medal with a silver in the 200 free, the Koreans placed 6th after missing the Olympic final in 13th place last summer in Tokyo.

Over the past few years, Korea has cut nearly nine seconds from its national record in this event. At the 2019 Worlds, where the same quartet set a record with a 7:15.05, no swimmer was under 1:47. The same was true at the Olympics two years later, again with the same group. But three swimmers finished under that 1:47 mark on Thursday, led by a 1:45.30 opening leg by Sun-woo that ranked as the fastest leadoff time and fifth-fastest of the whole race. During the 200 free final on Monday, Sun-woo set a new Korean record with a 1:44.47, .83 seconds faster than his relay swim.

Kim Woo-min followed up with a 1:46.57, the second-fastest on the team, before Lee Yoo-yeon split 1:48.28, slightly slower than his prelims time. Lee Ho-joon anchored with a 1:46.78, taking .60 seconds off his previous best from prelims.

The rapid improvement displayed by the Koreans here indicates a bright future, especially considering that they’re even younger than the aforementioned Brazilians. Yoo-yeon is the oldest of the bunch at just 21 years old.

Excellent relay evolution. The team is relatively young, which I think will have a margin to lower this time.