Liberty To Host Campbell In Final Meet At LaHaye 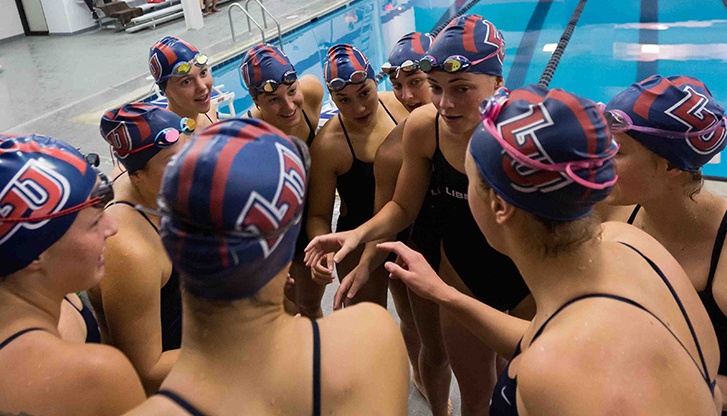 The Liberty swimming & diving team will compete in its lone home meet of the 2016-17 campaign on Friday, hosting... Current photo via Liberty Athletics

The Liberty swimming & diving team will compete in its lone home meet of the 2016-17 campaign on Friday, hosting Campbell at 5 p.m. at the LaHaye Aquatics Center.

There will be a live video stream available for Friday’s meet, as fans can watch, free of charge, through the Big South Network.

Fans unable to attend this weekend’s meets can also follow the live results on their mobile devices through the MeetMobile app.

Friday’s meet is scheduled to be the final competition for the Lady Flames at the LaHay Aquatics Center. Construction continues on the Liberty Natatorium, which is slated to open during the 2017-18 academic year.

Liberty’s first meet in program history was contested at LaHaye Aquatics Center on Oct. 2, 2010, as the Campbell Camels defeated the Lady Flames, 111-94. The Lady Flames have gone 8-2 all-time at their home facility, winning their last seven home meets.

Prior to Friday’s meet, Liberty will honor its two graduating student-athletes, Rachel Rippey and Victoria Tschoke.

Hailing from Apex, N.C., Tschoke helped the Lady Flames win their first-ever CCSA championship as a freshman in 2014. She has scored in the top eight in all nine individual events she has contested at the last three CCSA meets. A two-time CSCAA Scholar All-America honorable mention recipient, Tschoke placed second in the 200 backstroke at the 2016 CCSA Championships.

Liberty opened its season with a program-best start of 5-0. After sustaining two straight losses, the Lady Flames got back on the winning track with a 153-104 victory at UNC Asheville,Saturday.

Sophomore Alicia Finnigan was named CCSA Women’s Swimmer of the Week on Oct. 9, after winning three individual events and swimming on a victorious relay at FGCU. Her winning 200 fly time of 2:00.25 was the second fastest time in the event by a CCSA swimmer this season, and fastest ever by a Lady Flame in a regular-season meet. She also won the 500 free (5:01.76) and 400 IM (4:26.14), both in a season-best time.

Freshman Jenna Joyal has had a strong start to her diving career at Liberty, being named CCSA Women’s Diver of the Week on Oct. 11. She has recorded the fourth-best score in the CCSA in one-meter diving this season.

Liberty holds at least one of the top three times in the CCSA in the following individual races this season:

Campbell enters the week with a 7-3 record, including 4-1 against CCSA opponents. In their last meet, the Camels fell at Vanderbilt on Dec. 17. Campbell posted a fifth-place finish at the 2016 CCSA Championships, edging out Incarnate Word with 715 points to earn the program’s best-ever conference championship score and placing.

Following Friday’s meet, Liberty will wrap up the regular season with a two-day meet at Davidson. The meet, which features Liberty, Gardner-Webb, Georgia Southern and Davidson, is scheduled to take placenext Friday and Saturday at the Charles A. Cannon Pool.