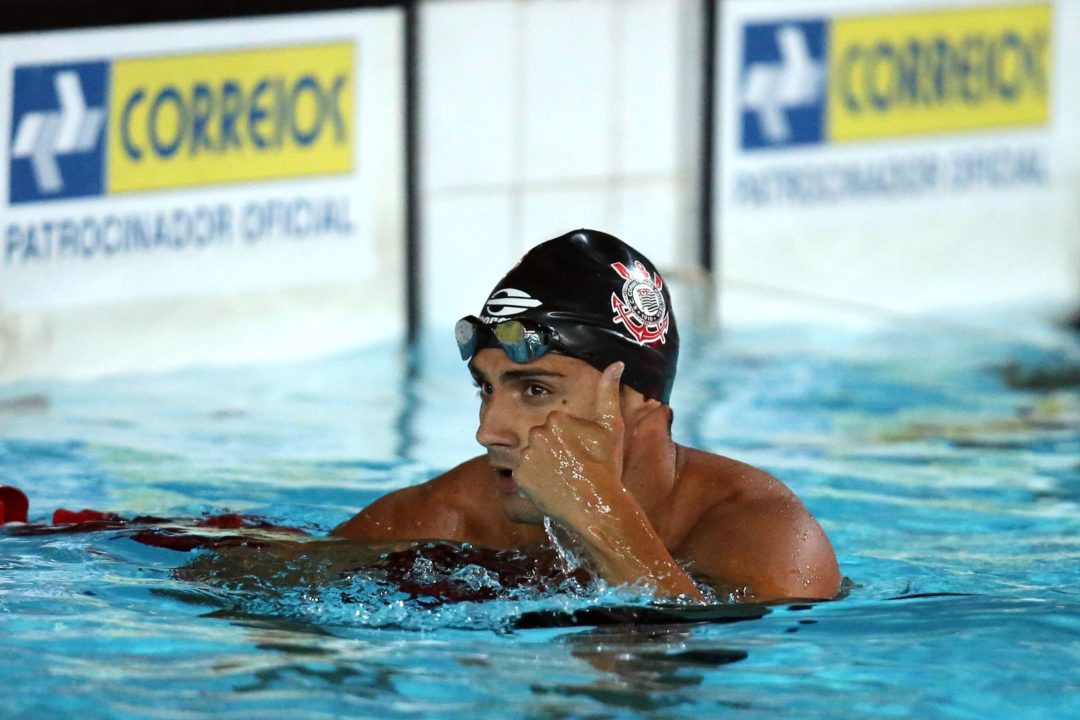 The fourth day of Brazil's long course nationals, called the Maria Lenk Trophy, saw Leonardo de Deus power away with the 200 fly in the world's fastest time of 2015. Archive photo via Satiro Sodre/SSPress

That time should be under siege as early as tomorrow, though, as Japan’s Daiya Seto was 1:55.79 in the semifinals of Japanese Nationals earlier today. He’ll compete in the final tomorrow.

Second was comeback swimmer Kaio Marcio Almeida of Minas at 1:56.99, but he just missed the cut for Worlds this summer by .02.

In the women’s 200 fly, Joanna Maranhao continued her strong week with another win. Maranhao, swimming for Pinheiros, was 2:10.33, but was on pace to go quite a bit faster until she fell off on the final 15 meters. Gabriela Rocha of Corinthians was second in 2:14.84.

Breaststroker Felipe Lima was the headliner of prelims, going 59.78 in the morning for the world’s third-best 100 breast time. He went out a little slow at night, though, and trailed Felipe Franca by almost a full second. Though Lima stormed back, Franca held on for the win, 59.84 to 1:00.03.

In the women’s event, Jhennifer Conceicao took her race out fastest, but fell off big over the back half and faded to fourth. Passing her up was Unisanta’s Julia Sebastian, who finished in 1:09.62 for the win.

Minas teammates Lucas Kanieski and Miguel Leite Valente battled for the men’s 800 free title, with Kanieski leading early. But at the 500-mark, Valente took off, eventually taking the win in 7:58.44. That’s just two tenths off the Brazilian record. Kanieski was 8:01.10 for second and Brandonn Almeida took third in 8:01.60.

The women’s 4×100 free relay saw Etiene Medeiros stake SESI to a huge lead that the team would never surrender. Medeiros was a lifetime-best 54.99 leading off, putting her just over half a second off the Brazilian record. Her relay went 4:41.62 for a new meet record. Larissa Oliveira powered Pinheiros to second with the field’s best split, a 54.62.

Unisanta’s Matheus Santana was a little shaky off the start, but he had two much speed to be beaten on the leadoff leg of the men’s relay. Santana opened in 48.99 to lead Joao de Lucca (49.34) of Pinheiros. But de Lucca handed off to Bruno Fratus, who blasted Pinheiros into the lead with a 48.64 split. They would go on to win the relay in 3:15.83. Minas sat third most of the way, but anchor Cesar Cielo helped them pass Unisanta with the field’s best split of 47.90. Minas was 3:16.12 and Unisanta 3:16.38.

I think that’s a new best for him, by a tenth or so. That’s wicked fast.

So do you have to get the FINA cut in order to swim at worlds? Cause that is ungodly fast.

Very impressive. This definitely makes him a medal threat.

I went to a website to look at the results from this meet and Google translated it for me from Portuguese, so Leonardo De Deus was listed as “Leonard of God”. Pretty good billing! It’s nice to know you have God on your side! Anyway, it made me smile. 😉