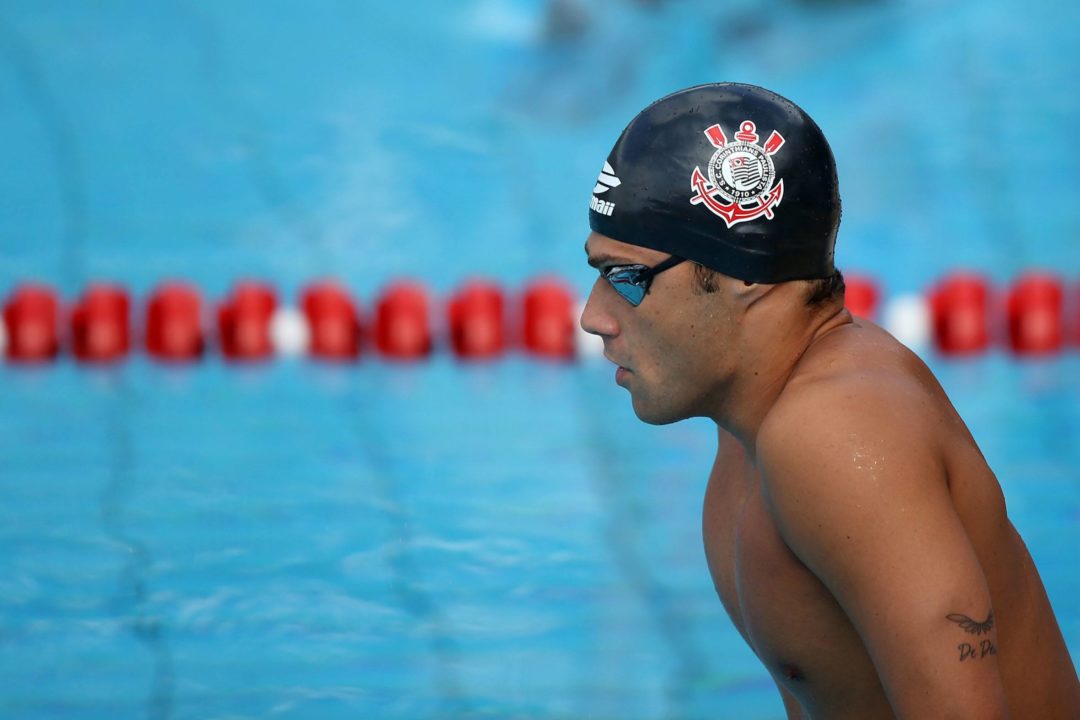 Without giving anyone else a chance, Joanna Maranhão (Pinheiros) opened strong, with a body length lead at the 100 (1:02.13) and near two at the end of breast leg. She would finish in 2:12.78, a South American textile best, and not far from the 2009 shiny suit mark (2:12.12). Virginia Bardach (Minas) was second in 2:16.58, with Maranhão’s team-mate Gabrielle Roncatto in third with 2:17.85. Maranhão will go to Kazan with her time, and Roncatto qualified for Junior Worlds.

Pinheiros’s Henrique Rodrigues made a race in the same fashion as Maranhão, opening strong and a second and a half a head at the 100 (55.11) but without the same speed on the breast and free legs. Nonetheless, it was enough to win in 1:59.28 and assure his slot for Kazan. Corinthians’ Thiago Simon hit a 2:00.60 for silver and Rodrigues’s team-mate Gabriel Ogawa made a Phelpsian comeback on the freestyle leg (27.22) for bronze in 2:02.06. In the morning, Caio Pumputis (Pinheiros), went 2:04.05 and got a slot for Junior Worlds.

Cesar Cielo (Minas) didn t have a chance – at the start, Nicholas dos Santos (Unisanta) put a third of a body length on him by about 20 meters and sustained till the end, when Cielo tried to dig in, without success. Dos Santos made the new top time in the World (and sole sub-23) with 22.90 and Cielo was second in 23.11 (the second time in the World this year). Cielo’s team-mate Henrique Martins was third in 23.38.

Etiene Medeiros (SESI) put on an underwater show at the start, appearing a half body ahead in the first 15 meters, and with incredible stroke frequency, a full body at 25 meters. She increased another half in the last 25 meters to win in a new meet record of 27.38. That’s the top time in the World and only a hundredth of a second shy of her South American record. Corinthians’ Andrea Berrino was second in 29.39. Berrino’s team-mate Natália De Luccas was third in 29.50.

Pinheiros’s Guilherme Guido hit a nice start, and was ahead till the last five meters, when a bad finish earned him only third in 25.49. Gustavo Louzada (GNU) was second in 25:44 and Guido’s team-mate Daniel Orzechowski won in 25.19. Orzechowski, the South American record-holder at 24.44, is still trying to find his top form after a shoulder surgery last year.

Can Dos Santos do the 100 fly, because Brazil could sure use him in their medley relay?

Well, maybe it’s too late to qualify for Kazan, but I hope he’ll train to swim it in Brazil’s Olympic Trials!

Dos Santos is a bodybuilder, he cannot swim 100 fly