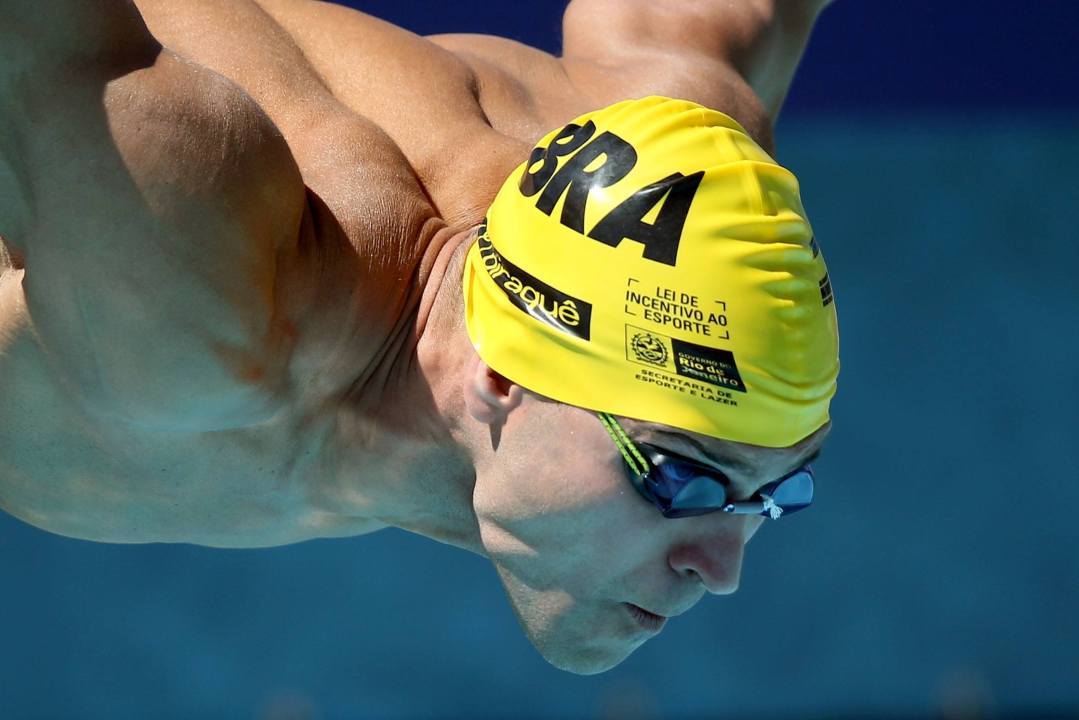 Nicholas Santos will challenge Cesar Cielo for the 50 fly title in tonight's final on Day 6 of Maria Lenk. Archive photo via Satiro Sodre/SSPress

Brazil’s long course national championships – known as the Maria Lenk Trophy – is in its 6th and penultimate day in Rio de Janeiro, and two more swims qualified for Junior Worlds out of the preliminary heats. Rafaela Raurich of Curitibano Club added the 400 free to her slate (she already had the qualifying time for the 200 free) and Caio Pumputis of Pinheiros punched his first ticket with a 200 IM of 2:04.05.

In the women’s event, Joanna Maranhão of Pinheiros led the morning session with a 2:16.92. Maranhão has already achieved the cut for Kazan this year with 2:13.40. Gabriele Gonçalves, who has the Junior Worlds cut already (with 2:17.05) went through sixth in 2:20.98.

Cesar Cielo of Fiat Minas qualified second (23.65) behind Nicholas dos Santos of Unisanta (23.62). Cielo leads the world so far this year in the 50 fly with a 23.28 from the Metropolitan Belo Horizonte in March. Both Cielo and Santos have already been under the Kazan mark, with 22.91 and 23.01, respectively. In a post-race interview, Cielo said he hoped to go 22 in finals tonight.

Brazilian record-holder Leonardo de Deus of Corinthians put up the fourth-fastest time of the morning; going 3:57.45. Luiz Altamir of Flamengo led the field in 3:56.38. De Deus told reporters he was conserving energy in the morning with the aim of swimming a 3:50 in finals, keeping the South American record of 3:50.01 in the corner of his eye.

Brazilian record-holder Etiene Medeiros of SESI-SP was the fastest 50 backstroker in prelims, clocking a 28.01. Unisanta’s Andrea Berrino dropped 2.5 seconds to qualify second with 28.98, while Roberta Albino of Fiat Minas was third, also with a best time (29.70).