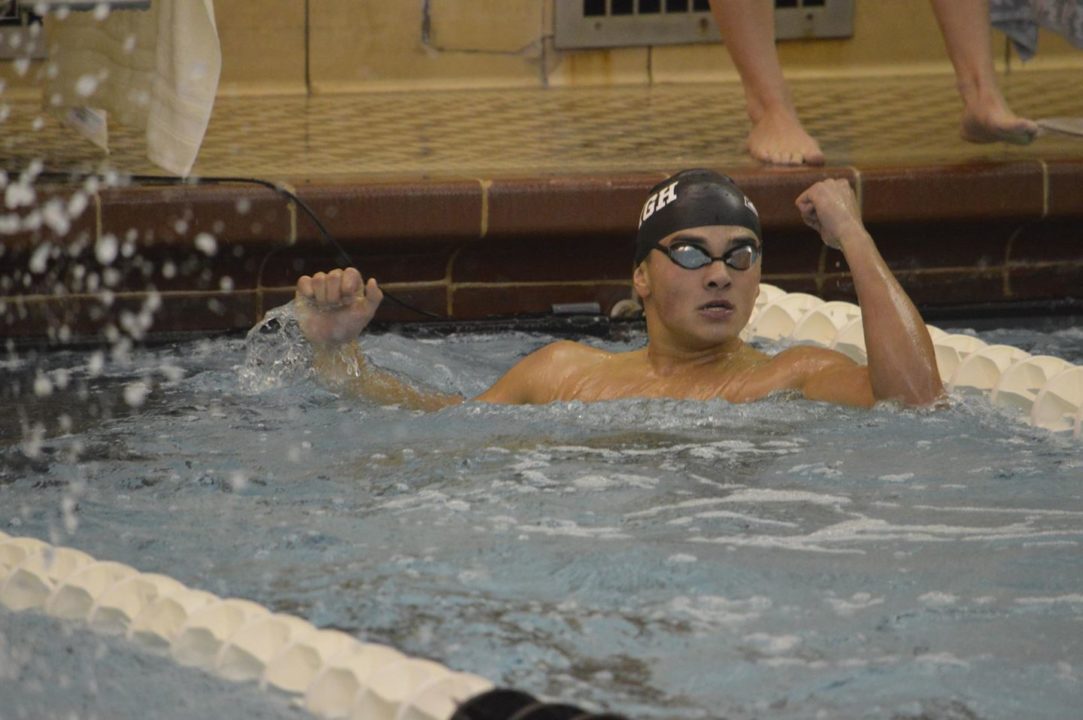 Breaststroke and IM swimmer Jessica Maeda has committed to swim for DI University of Denver beginning in fall 2021. She will be joining the school’s class of 2025.

BETHLEHEM, Pa. – For the first time in school history, the Lehigh men’s swimming and diving team defeated Boston University. In their season opener, the Mountain Hawks defeated the Terriers 170-118 on Saturday inside Jacobs Pool.

“I couldn’t be prouder of our team,” said head coach Rob Herb. “Today was a total team effort on all sides. Our men have the confidence that they can be a top team in the Patriot League.”

Starting with the 200 medley, the team of Owen Thomas, Connor Sept, Teddy Smith and Greg Giannella earned the top spot with a time of 1:34.59. The Brown and White team finished four tenths of a second ahead of the Boston team.

In the 100 backstroke, Owen Thomas came through with a victory with a time of 52:56 for nine points, Lasco picked up his second victory of the day with a win in the 50 freestyle with a time of 21:60.

In the 400 freestyle relay, the team of Wilson, Smith, Lasco and Caleb Eberly took home first and 11 points for the Mountain Hawks with a time of 3:08.79.

The Brown and White also got strong performances from many other swimmers on the day. In the 100 backstroke, Joey Huber put forth a solid time as he finished second at 52:60, while Connor Sept took second in the 100 breaststroke with a time of 59.11.

With high expectations coming into the season, the Lehigh women’s swimming and diving team didn’t disappoint. The Mountain Hawks began their season on a high note, defeating Boston 185-108 in front of a jam-packed crowd inside Jacobs Pool.

“Today’s meet was great for the women,” stated head coach Rob Herb. “Our whole team was great inside the water.

Lehigh couldn’t have scripted a better start to the dual meet as diver Megan Fennell broke two team records. In the 1 meter dive, the junior tallied a score of 277.05 which shattered the previous record. Then in the 3 meter dive, Fennell recorded an outstanding score of 281.47.

Payton Miles, one of the best Patriot League swimmers also won two individual events on Saturday. The senior registered a fast time of 23.94 to win the 50 freestyle, while then taking first in the 100 free at 51.88.

In the 200 medley relay, the Lehigh team of Anna Francisco, Anna Thomas, Sarah Hardy and Payton Miles blew away the competition, taking first with a time of 1:47.02.

Freshman Danielle Prekop had a nice start to her collegiate career. Prekop won the 1000 freestyle with a time of 10:34.65.

In the 200 backstroke, Nicole Shek jetted past her opponents and finished first with a time of 2:07.39, while Samantha Gallego topped the field in the 500 freestyle with a time of 5:15.57.

“We knew coming into this year that we had a top team and today confirmed that,” said Herb. “The women work so hard and they are dedicated to trying to get better every single day.”

Up next, the women will have a dual meet at West Chester on Friday at 6:00 p.m.

Jack Carignan and Stuart Vickery highlighted the Terriers first effort of the 2019-20 campaign, winning two events apiece. Carignan took the top spot in the 200 IM and 200 back, while Vickery won the 100 and 200 fly. Darren Ty and Kyle Falkstrom also topped the podium, as Ty took the 100 breast and Falkstrom followed with a first-place finish in the 200 breast.

Two-time All-Patriot League First Team member Carly Soares picked up where she left off, topping the podium in the 200 IM, 200 breast and 100 breast. Sydney Lee also picked up an individual victory on the day, taking the top spot in the 500 free.

BU will return to action on Saturday, Oct. 19 for its home opener against Bucknell at 1:30 p.m.