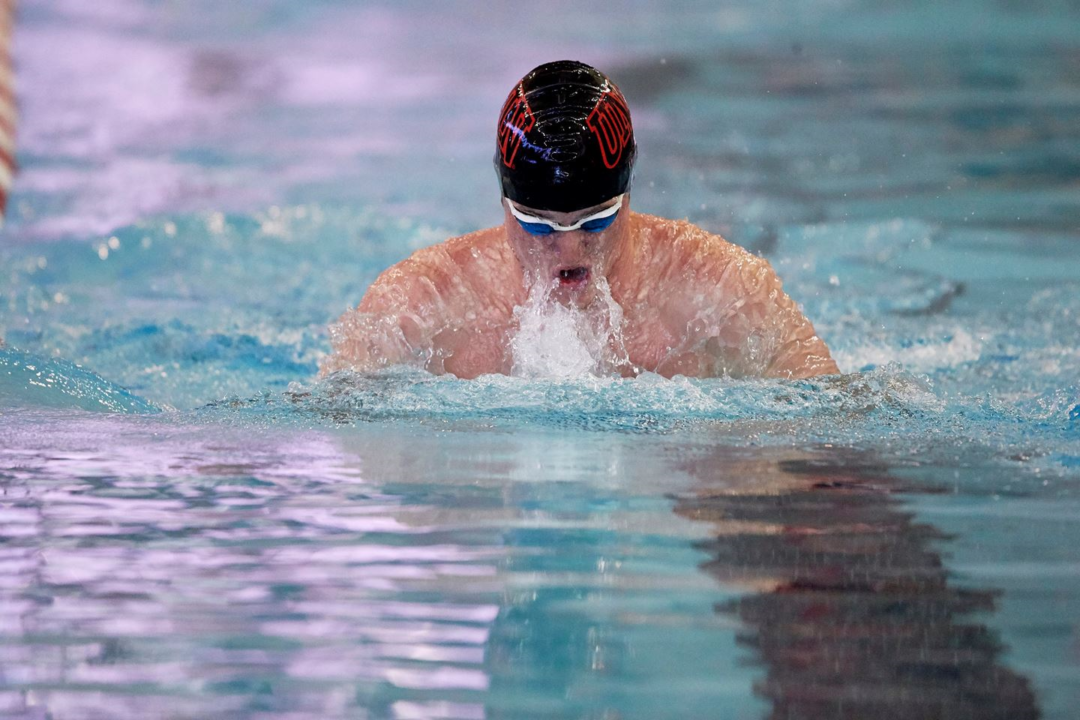 The UNLV men and women's swim team wrapped up its home opener weekend with a dual meet sweep against CSU Bakersfield on Saturday. Current photo via UNLV Athletics

The UNT swimming and diving program put on its annual Green vs. White meet on Friday and Saturday, with the White team coming out on top, 158-137.

The Miami Redhawk women cruised past the Golden Grizzlies 208-92, while the Oakland men came out with a victory by a score of 160-140.

LAS VEGAS – The UNLV men and women’s swim team wrapped up its home opener weekend with a dual meet sweep against CSU Bakersfield Saturday at the Jim Reitz Pool. The Rebel women were able to stay ahead from the start and come out on top with an overall score of 189-111, while the UNLV men won just as convincingly 194-104.

QUOTABLE-
“A nice win today for both programs. We swam well, not as sharply as we’ll need to later in the season.
The women were a little sluggish after last night’s hard meet, but still swam well and that was good enough for the win. Carissa Armijo was very poised today in her racing, and Kate and Eva and Julia sprinted well all weekend.
Our men swamped them in the distance events, led by freshman Cam Castro. Richard Szilagyi has really come alive, leading the sprints all weekend.
Hats off to Bakersfield medley relays, they are really stacked this year.”
– HEAD COACH BEN LOORZ

NEXT FOR THE REBELS: The Rebels will hit the road to Riverside, California to face Cal Baptist in a dual meet Saturday October 26 at 1:30 pm.

“It was great to see us get up and race UNLV on the women’s side,” said Chris Hansen, CSUB’s Director of Swimming. “We might have lost the meet, but we won some important races. The women are still showing that they are ready to play. I’m so excited to see what happens this year.”

A freshman from Tucson, Ariz., Sohoel-Smith squeaked out a victory in the 100-yard breaststroke, out-touching UNLV’s Skylar Moore by two hundredths of a second with a time of 1:07.47. Senior Maddie Cosgrove also earned a win on Saturday, cruising to victory in the 200 fly by more than a second (2:05.39).

For the Bakersfield men, Hansen appreciated the effort of his squad: “We had a great weekend. They men need to work a little on their depth; we will get it!”

Hansen pointed out Gillilan, Rogic, and sophomore Antonio Milin as the men’s team’s top performers from Saturday: “Kris swam two personal-best dual meet swims in both backstrokes and his 100 fly was close to a personal best. Loren continues to destroy his races. He also had a great 100 free leadoff in the relay. Antonio is a racer. Every time he enters the water, it’s to battle.”

Gillilan, a native of Fort Collins, Colo., dominated for two-second victories in the 100 fly (47.56) and 200 fly (1:50.40). Gillilan also helped the CSUB 400 medley relay team (3:19.60) start the dual with a win. Rogic and Milin joined their teammate in that relay as did junior Ryan Brimer. Hansen pointed out the performance was “one of the best relay times we have done in a dual meet since 2012.”

As expected, the CSUB male divers performed well in their first competitive action of the season. Making his `Runner debut, freshman Sam Stinson placed second on the 1-meter board with a score of 281.70, less than 20 points outside of CSUB’s Top 5 all-time in the event. At three meters, Adam Estrella (263.40) edged Stinson (252.53) to finish second on Saturday.

CSUB will return home and begin to prepare for a busy weekend at home. The `Runners will kick off next weekend’s action at the Hillman Aquatic Center on Friday, Oct. 18, with the CSUB Sprint Classic beginning at 2 p.m. On Saturday, Bakersfield will host the Roadrunner Invite starting at 10 a.m. with a full day of swimming action on the schedule. Meanwhile, Bakersfield’s divers will be in Riverside, Calif. on Saturday for the Lancer Diving Invite, hosted by fellow Western Athletic Conference member California Baptist.