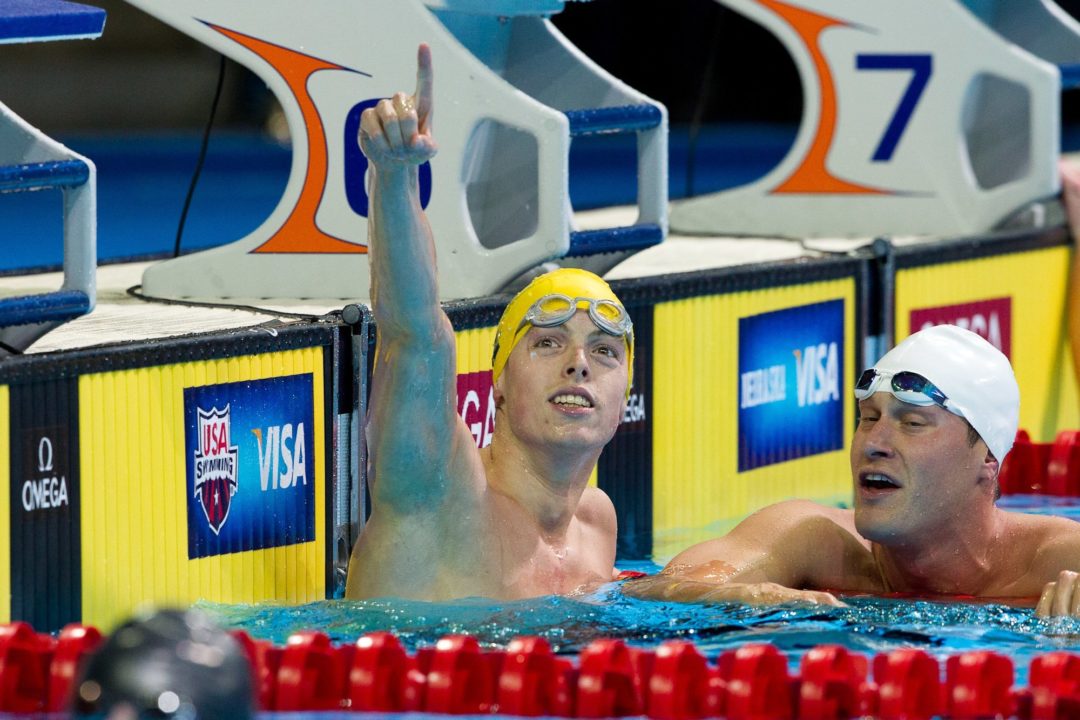 Connor Jaeger ran away win the men's 800 free on night one of the Charlotte UltraSwim. (Photo Credit: Tim Binning, theswimpictures)

Teenage distance sensation Katie Ledecky of Nation’s Capital opened the evening with a meet record time of 16:04.58 in the women’s 1500 freestyle.  The teenage sensation from Nation’s Capital Swim Club stuck to her usual strategy, getting out in front of the race early (she was out in 4:11.87 over the first 400) before settling into a groove and grinding out the final portion of the event.  That time is the second fastest in the world (behind only Lotte Friis of Denmark), and a massive time drop for the Olympic gold medalist.  Coming into tonight, consensus was Ledecky was going to better her previous best of 16:24.46 from the 2011 Junior National Championships, but she surpassed the expectations of many, posting a time that would have placed fourth at the 2011 World Championships.  Going this fast at an in-season meet is another step towards building the case that Ledecky could be one of the best distance swimmers of all time.  Interestingly, Ledecky was significantly faster on the odd 50’s of each 100 (averaging right around 32.0 over the last 1200) than the even 50’s (averaging 32.8).

Three-time Chilean Olympian Kristel Kobrich was second behind Ledecky in the first timed final heat, touching in 16:08.08, also good for top five in the world this season.  Kobrich actually outsplit the entire field over the last 1100 meters, but the opening 400 meter surge from Ledecky was too much to overcome.

Kobrich was knocked back to third place following a lifetime best swim from U.S. Olympian Chloe Sutton in the second timed final heat of the night.  Sutton clocked in at 16:07.83, bettering her previous best from all the way back in 2009 (16:12.56) by almost five seconds.  That time puts the Mission Viejo distance star fourth on the world rankings this season, setting her up for another great summer in the pool events.

Notably, after being held out of the ACC and NCAA Championship meets earlier this year, Stephanie Peacock of North Carolina competed in her first big event, finishing fifth in 16:33.47.

Connor Jaeger of Club Wolverine crushed the field in the men’s 800 meter free, turning in a lifetime best to win in 7:53.33.  The rising senior at the University of Michigan majorly negative split the race, cruising the first half of the race in 3:58.24 before kicking into another gear, splitting under 30 seconds every 50 over the final 400, bringing it home in 3:55.09.

Jaeger has continued to show tremendous improvement over each of the last three summer seasons, going from A-finalist at the 2011 Speedo Summer Nationals, to surprise U.S. Olympian last summer (despite rarely swimming the 1500), to unquestionable favorite to represent the United States (and possibly contend for a medal) in Barcelona this summer.  He seems to be competing with more and more confidence every time he dives into the pool, winning a pair of NCAA titles this winter in the distance events this winter, and showing he has the speed to contend over the 200 distance, as well.  His 7:53.33 tonight was more than seven seconds faster than he was a year ago at this meet (8:00.81), and is the fifth fastest in the world this year.

Georgia rising sophomore Matias Koski was a distance second, finishing in 8:03.05.  Zane Grothe of Auburn was third in 8:04.17.

I was present at this meet tonight. Connor Jaeger did a double pull out….these refs are horrible

Not sure I understand what you mean…a double pullout on freestyle? That would be legal…though I can’t imagine a whole lot of freestylers are doing pullouts.

I actually think it could conserve energy in a long distance freestyle race on the start.

I’m trying to decide if this is joke or not.

Umm…what do you mean? Do you mean he stayed underwater past 15 meters or something?

does any one else think conner Jeager is really cute?

Only the fellow aliens.

He is the cutest thing I have ever seen. His biceps are massive and powerful at the same time, while his abs are tight but bulging. I am glad he won the mile with that Beautiful and graceful stroke that could awaken even the sleepiest most cutest monster.

If I had written that about Olivia Smoliga, I would have been killed by some people on swimswam!

This is a little weird but they aren’t talking about a high school girl.

Is most countries where paranoid does not reign.. Saying a younger girl can actually be or turn out to be a beatiful women does not mean you are a psycho with some mental disturbance who is actually thinking of dating younger girls..