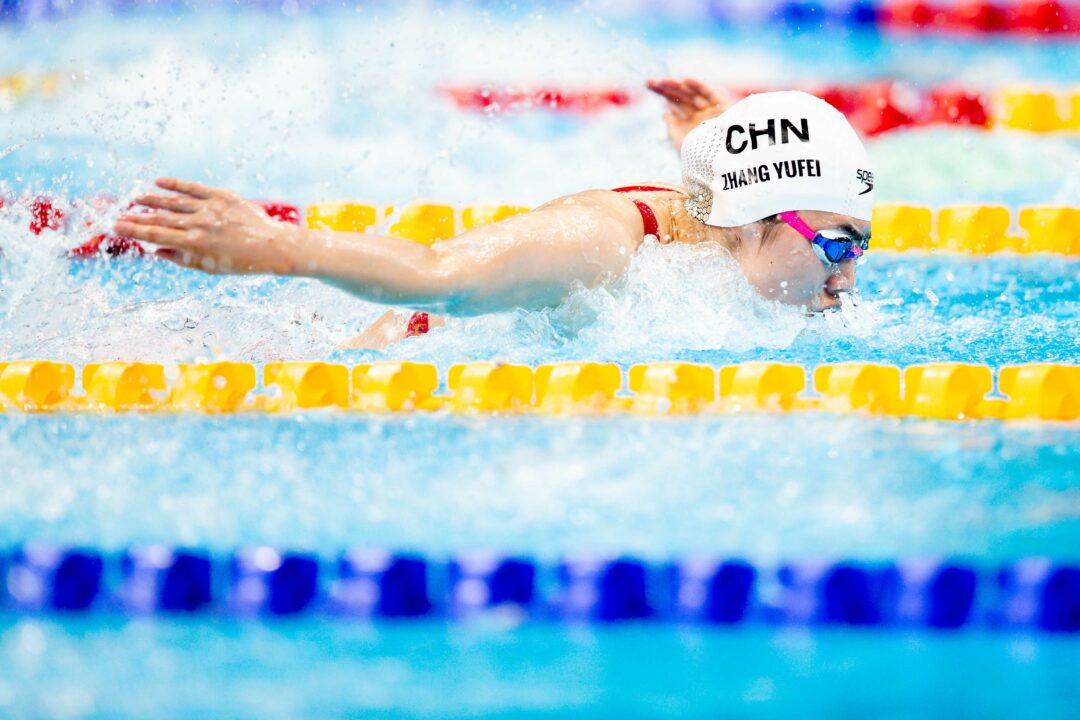 China's Zhang Yufei has dropped the women's 100 fly semis in Abu Dhabi after winning the 200 fly and placing fifth in the 50 fly earlier in the meet. Archive photo via Jack Spitser/Spitser Photography

Two expected title contenders have withdrawn from their respective semi-finals on Day 5 of the 2021 Short Course World Championships, with China’s Zhang Yufei dropping the women’s 100 butterfly and Russia’s Kliment Kolesnikov opting out of the men’s 100 freestyle.

Zhang, who roared to gold earlier in the meet in the 200 fly and just last night finished fifth in the 50 fly, has surprisingly scratched out of the 100 fly semis after qualifying third overall out of the heats in a time of 56.47.

Zhang is not entered to swim another event during the session and is also not listed as a member of China’s 4×200 free relay squad for the final.

Also dropping the 100 fly semis from her program was Canadian Katerine Savard, who looks to be resting up for the women’s 4×200 free final. Savard was the 12th-fastest swimmer in the morning in 57.23.

In their absence, Belarusian Anastasiya Shkurdai (57.57) and Greece’s Anna Ntountounaki (57.60) step into the semis after placing 17th and 18th in the prelims, respectively.

Another major scratch came in the men’s 100 freestyle, where Kolesnikov drops out after qualifying 14th in the heats with a time of 47.19. Aruba’s Mikel Schreuders (47.36) steps into the semis in his place.

Kolesnikov has already won four medals here in Abu Dhabi, and will swim the lead-off leg on Russia’s 4×50 medley relay to kick off the penultimate finals session—scheduled just 14 minutes before the 100 free semis.

What happen with Zhang Yu Fei to withdraw from 100m fly?

According to my sources in China, she had her menstrual period. However, take this with a grain of salt

I see.thanks for info, but so sad since she is on fire