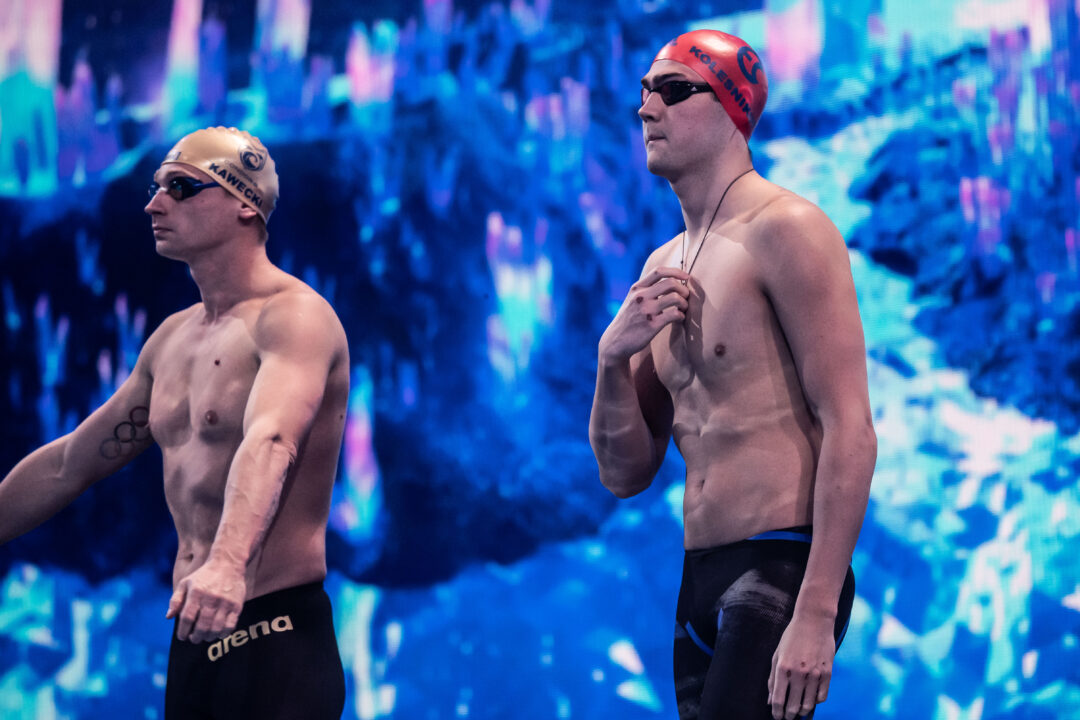 Kliment Kolesnikov became the seventh Russian to break 22 seconds in the men's 50 freestyle, tying for sixth in the world this season in 21.89. Archive photo via Mike Lewis/Ola Vista Photography

Having already reset his personal best in the 100 freestyle and 100 backstroke numerous times earlier in the competition, Kliment Kolesnikov added a PB in a third event on Friday morning in the men’s 50 free.

The 20-year-old recorded a time of 21.89 in the prelims, annihilating his previous best of 22.31 set at the 2019 Russian Championships in Moscow.

In becoming the seventh Russian under the 22-second threshold, Kolesnikov slots into a tie for sixth in the world this season, and the time would also be good enough to qualify for the Olympics if done in the final, provided a top-two finish (the FINA ‘A’ cut is 22.01).

Joining Kolesnikov sub-22 was Vladimir Morozov, the Russian Record holder at 21.27, who registered a time of 21.91. Having placed fourth in the 100 free, Morozov is still seeking to qualify in an individual event for Tokyo.

In the women’s 50 free it was Maria Kameneva pacing the field in an elite time of 24.52, good for ninth in the world this season. Kameneva owns the National Record at 24.21, set in 2018, and will look to add a third individual event to her program tonight.

Just like the stroke 50s, the 50 free events will have both the semis and final contested during the evening session with the meet finishing up tonight.

The men’s 400 medley relay also held prelims this morning due to having over eight clubs enter.

Where is the live recap for the finals, it has begun?

I.e a result link where the names are not in Russian

None that we’re aware of.

Yes, at the same place you find Russian-language results of US Olympic Trials

You have to respect Kolesnikov’s piety, but with both his 100 back and 100 free approximately .4 off the WR, you also have to wonder how much effect that neck chain had on his times.

I wonder how much effect it actually has on his times. Itˋs been a topic basically since he was a fast teenager. Same with Dressel and his cords…I have the feeling that those things donˋt actually have as much of an effect as one would think…but then again, swimmers are shaving their body too.
Anyone got some stats about that?

Yea that has to cost him a tenth or two. I assume he’s used to any movement that the chain would make during the race, so psychologically, he won’t be thrown off by it like a swimmer wearing it for the first time would be.