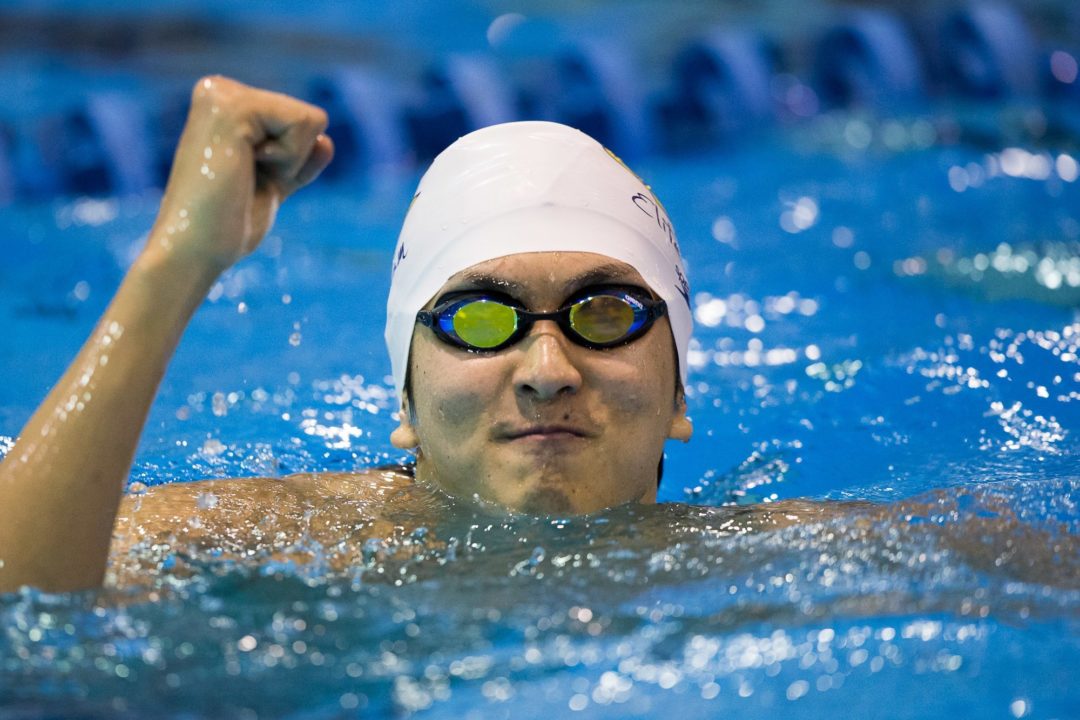 Junya Koga now sits as the third-fastest 50m backstroker in the world after his performance at Japanese Nationals. Archive photo via Tim Binning/TheSwimPictures.com

The first event of finals saw Junya Koga pop off a swift 24.75 to win the men’s 50m backstroke.  Koga, who trains with Club Wolverine Elite in Ann Arbor, now sits as the third-fastest swimmer in this event thus far in 2015.

The next sprint event, the men’s 50m breaststroke, saw just a tenth separate the top three finishers.  Hiromasa Sakimoto claimed first prize with his speedy 27.68, immediately followed by Ryouta Nomura in 27.74, then Yasuhiro Koski in 27.78.  Sakimoto was just able to slide into the world’s top ten with his swim, now positioned as 9th with today’s performance.

A little history was made in the women’s 200 freestyle event, as third-place finisher, Rikako Ikee, became the first Japanese middle school student to qualify for the FINA World Championships since 2001.  Ikee managed to finish in position to be part of Japan’s 4 x 200 freestyle relay with her performance today. In the top spot, however, was Chihiro Igarashi, who touched the wall first in 1:58.12, followed by second place finisher Sachi Mochida with her time of 1:58.69.

In the men’s edition of the 200m freestyle event, first-place finisher Kosuke Hagino came dangerously close to cracking Japan’s national record in tonight’s finals.  Hagino’s winning time of 1:45.82 was just outside the current mark of 1:45.23, but earns him his second individual gold of the meet so far, having already won the men’s 400 freestyle event..  Daiya Seto improved upon his 2014 fourth-place finish by touching as tonight’s runner-up with his time of 1:47.71.  Yuuki Kobori claimed third place in the race in 1:47.73.

Last year’s runner-up in the women’s 100m backstroke race was able to take the top spot this year, as Sayaka Akase touched the wall first in 1:00.83.  And, in the women’s 100m breaststroke, Kanako Watanabe successfully defended her 2014 title, touching today in a time of 1:06.45, just 8/100 faster than last year.

I think its ikee rikako, born in 2000. Makino was born in 1999, so she has time until the end of 2016 to improve this record, which is in my opinion the “slowest” junior world record. On the mens side its probably the 200 free record by horton.

Seto went 1:47.7 in the 200 free and 1:55.7 in the 200 fly in one day? Holy crap. I’m not sure about the order they went in due to the structure of the article, my guess is the fly was first, but either time after the other is impressive. And a sub-2:00 IM as well? That’s a tough triple. Hagino is a beast as always. Looks like the sprinting is improving a bit over in Japan. Shioura wasn’t too far off his PB in semis, and at least one other swimmer is getting closer to breaking 22. It’s hard to save up too much in the 50, though, so we’ll see if he actually goes faster in finals. On the… Read more »