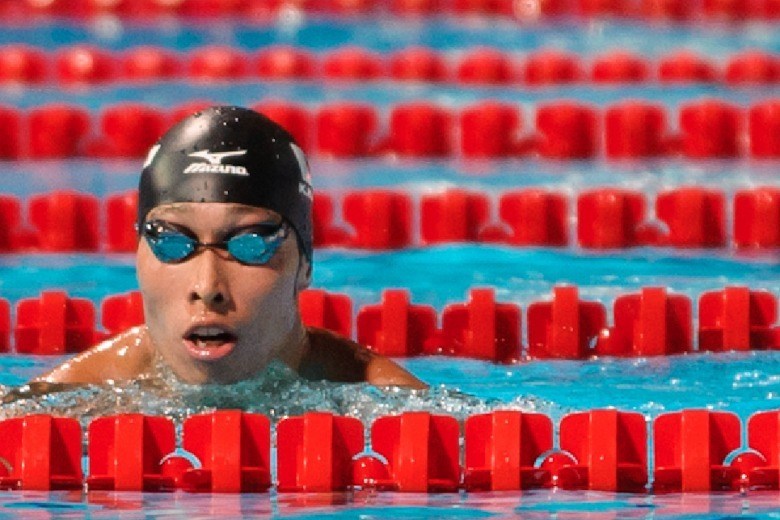 Junya Koga now sits as the third-fastest 50m backstroker in the world after his performance at Japanese Nationals.

Hagino crushed a tough 400 IM field, going 4:08.54 to take over the world’s top ranking for 2015. In fact, the second-ranked swimmer was in the field with Hagino, and lost the race by over two seconds. That was Daiya Seto, who was 4:10.97 and sits second worldwide.

Meanwhile, third-place finisher Takeharu Fujimori moved up to 4th in the rankings with his 4:13.93.

The other big swim was Watanabe’s 200 breast, which displaces world record-holder Rikke Moller Pedersen for the world’s #1 ranking. Watanabe went 2:20.90, turning in 1:08.13 at the 100-mark and never letting up. Rie Kaneto came within a tenth of Moller Pedersen’s season-best with a 2:21.90; she now ranks third worldwide.

Runa Imai, born in 2000 (making her 14 or 15), took third in 2:23.55, breaking the Japanese junior record and putting the Junior World Record in her crosshairs.

Miki Uchida has been the top female sprinter for Japan as of late, and she defended that title with a narrow win in the 100 free. Uchida’s 54.15 bested the 54.34 from Yayoi Matsumoto for the win.

In the men’s event, Katsumi Nakamura nipped Shinri Shioura 48.78 to 48.86 for the event title.

In yet another close race, Sayaka Akase picked up the national 200 back title, going 2:11.01. That was just .05 ahead of Yuka Kawayoke, who led early but fell off down the stretch and settled for second.

The women also contested the 50 fly, where Rikako Ikee was the winner in 26.49.

The night opened with distance free races in both genders. Ayatsugu Hirai went 15:01.78 to win the men’s 1500 free, besting Kouhei Yamamoto. Meanwhile in the women’s event, Yuuna Kikuchi took the win in 16:25.92, overcoming 15-year-old Chinatsu Satou, who won the 800 a day earlier.

Wow, Hagino has amazing turns in his 400 free!

Also, Irie had a TERRIBLE start in that 100 back! He had to catch up a half body-length after the start alone!

Got to love how efficient and smooth he is over the water !!!! Irie is probably the most dangerous for the title this summer . Let’s see what Grevers , Thoman and Plummer deliver next week .