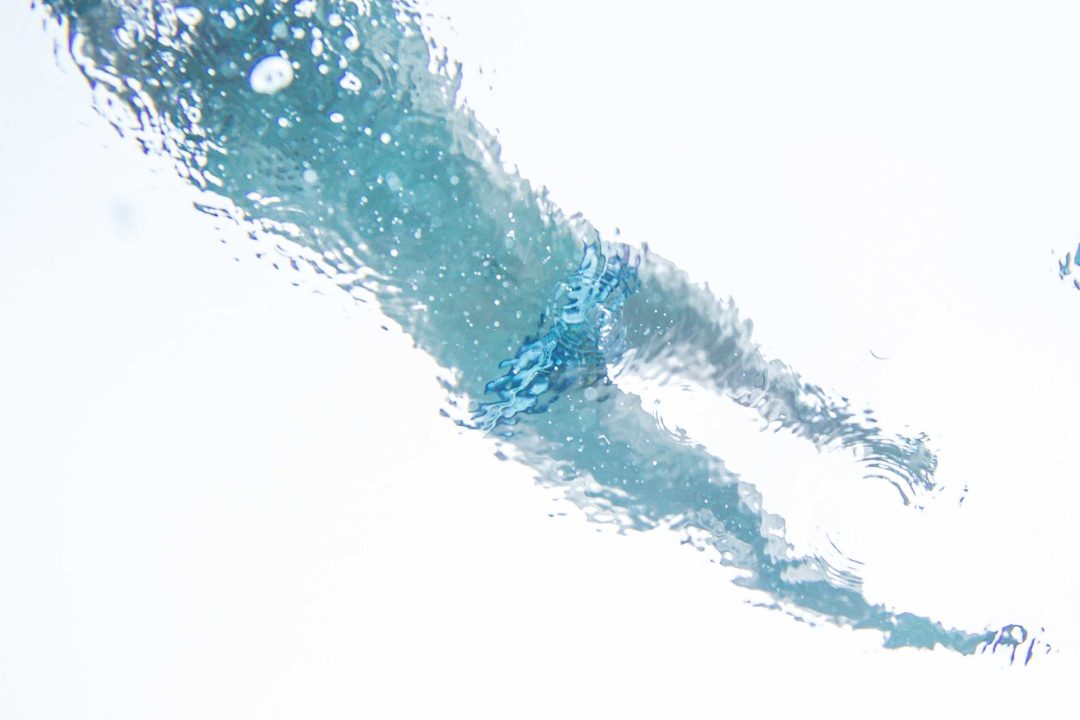 Kieren Perkins was the dominant distance swimmer of the 1990s. Here’s the legend’s advice on how swimmers can get mentally tough. Current photo via Jack Spitser/Spitser Photography

Try This Dryland Tip to Fire Up Your Freestyle Kick

Want to power up your kick? Here’s a quick dryland tip you can use to unleash a faster and more powerful freestyle kick in the water.

Why Your Coach Makes You Train Your “Off” Strokes

We all have the things we excel at—and things we don’t—in the water. Strokes included. Here is why coach is having you train them.

The Day Bill Pilczuk Shook the Swimming World in Perth

In January 1998 a soft-spoken Bill Pilczuk shook the swimming world when he dethroned the top sprinter in the history of men’s swimming.

“Help–other swimmers on my team are swimming fast and I’m not.”

When teammates perform well, and you don’t, you are provided an opportunity to supercharge your own improvement. Here’s how.

Ready to smash some PB’s? Here are some ideas for how to build a legendary pre-race routine so that you are locked in on race day.

This is How Powerful a Process-Based Mindset Can Be

Unsure just how helpful a process-based mindset can be in the water? Here’s an example of what this mindset can do for your swimming.

Some swimmers have to work at mental toughness. They need to learn through experience and with some guidance that they are tougher and more capable than they think.

Other swimmers just seem to have it. They have that steely look in their eye when they get in the water. They welcome the daily grind, the competition, and the challenge of soul-crushing sets.

Australian distance legend Kieren Perkins was that kind of swimmer.

He would demoralize the competition by going out fast in his choice races (400-1500m freestyles) and establishing dominance on lap one. Until Perkins came along the mile was generally swum at an even pace, with a measured start. Perkins would fly out the gate from the beginning and hold on to dear life, treating the race like a long sprint.

This strategy and approach was merely a reflection of his training, which was wasn’t ultra high yardage necessarily, but was certainly high intensity. A typical main set would be 30x100s best average on 1:40 or 1:50 (he’d average :56-:57s all the way through).

Perkins ruled the distance events during the 1990s, winning back to back gold medals in the 1500m freestyle at the 1992 and 1996 Olympics, while breaking the world record three different times. He’d also add WR’s in the 400 and 800m freestyles.

Perkins career would end with a silver medal in front of a home crowd at the Sydney Olympics in 2000 as another Australian, Grant Hackett, ascended to the distance throne.

There’s lots you can learn from one of the greatest distance swimmers of all time.

Here are some lessons in mental toughness from Kieren Perkins.

Don’t be distracted by negative people who doubt you and your goals.

Got a big goal? Maybe it’s even a little nutbar?

I bet there are gonna be some people in your life who think it’s a little wacky, crazy, or downright foolish. Battling day in and day out for a big goal is hard enough—having people in your life throwing doubt and negativity on your efforts make it even worse.

Everyone will have an opinion when it comes to your ambitious goals. It can be hard to not listen to those that tell you that it’s a silly goal, or that it can’t be one. Or even just by people who slowly let the air out of your drive and motivation one pin-prick at a time (Come on, it’s just one drink! Coach isn’t even looking, let’s skip the last round).

The reasons people have for having a loser attitude with your goals are varied (insecurity, for instance) and ultimately irrelevant. Being successful in the water is not common. Otherwise everyone would be doing it. Standing out from the mediocre is going to get you some attention, not all of it positive.

When discussing goals, Perkins realizes that it’s critical not to let the unmotivated infect you while also emphasizing that this isn’t necessarily easy:

“That might mean doing something different to the rest of your peer group.”

Don’t flinch when it gets hard.

The world is full of people who talk about big goals. There’s no shortage of people who start sentences with “I could” or “I want to” but don’t finish them with “and here’s what I’m going to do about it.”

Talking a big game is easy. Having big goals when things are going your way is simple. Doing the legwork and showing up every day, on the other hand, is dang hard.

If you are serious about your goals in the water, make sure your actions prove it consistently over time.

This means in the face of adversity, doubt, or that sudden realization that your goals might take longer than you initially guesstimated. Don’t be a fairweather swimmer when it comes to your dreams.

“If you do have a goal in life, you need to be committed for the long haul.”

Even the pros experience serious lapses in confidence.

After his dominating performances in the 1992 Barcelona Olympics, and during the summer of 1994 where he batted around the 400, 800 and 1500m freestyle world records like a cat playing with a stuffed mouse, Perkins was the easy favorite to win the 1500m in Atlanta at the 1996 Olympics.

But he’d struggled at the Australian Trials, not qualifying in the 400m free. During prelims in Atlanta he’d barely made the final. The cacophony of whispers that Perkins was “washed up” were hard to ignore.

On the afternoon of the final in Atlanta, a couple hours before he was to get on the block, Perkins was experiencing a full-blown meltdown of confidence.

“I actually started to get really nervous, like 10-year-old-freaking-out, I’m going-to-die, my-life’s-over kind of nerves.”

The next time you are feeling the nerves stacking up on you, remember that not only is the swimmer in the lane next to you feeling the same way, but the swimmers you idolize so much feel it too.

Seems like the most simple piece of advice you could ever receive, right? Duh. Do what works. Stick to what you know. If it works, do the dang thing.

But a lot of the time when swimmers get anxious or feel that sense that things are spiraling out of their control it’s because they are doing something new, they don’t have control, and they’ve veered off from what has worked for them in the past.

Maybe it’s a new environment, so you adjust your pre-race routine. Or you are racing against elite-level athletes, so you feel you need to adjust how you do your meet warm-up at the last minute.

That day of the 1500m final Perkins got a little angry at himself. Gave himself a mental slap. And thought back to how he’d prepared for big race situations (and been successful) both as a high-level athlete and even as a kid.

He shut everything out. Compartmentalized the outside noise, the expectations, the other athletes, everything else and focused squarely on his lane and his swim.

“There was just nothing else, there was no noise, there were no other athletes, there was just this 50 meters of water where I had finally the opportunity to see what I had and really test myself and prove it.”

It wasn’t about beating anyone. Or rising to meet someone else’s expectations. Perkins locked himself in to his own performance, knowing that to get the best of himself he’d have to lock down his focus and attention.

Prepare yourself so that it doesn’t matter what the competition does.

Oh, I love this little piece of advice because it gives you the ultimate power of your own performance.

The point of training is to physically and mentally steel you so that when you get up on the block on race day it doesn’t matter what the competition does, who they are, or how fast they might or might not go.

Perkins intimidated his competition by the way he raced: he trusted his preparation enough to know that he could go out fast and keep the pace, breaking the other swimmers before the race had completed it’s first couple laps.

“I wasn’t particularly worried about the individual and I know that sounds a bit odd and selfish, but at the end of the day when you’re standing on the blocks there’s seven other bodies in the water with you, who they are, where they come from, what they like or don’t like—who cares? It’s irrelevant. They’re just seven other bodies that need to be dispatched like anybody else.”

If you train and ready yourself to the best of your ability it won’t matter what the competition does and doesn’t do on race day. You’ll be armed with your best performance possible.

Perkins must look at Australian swimming these days and shake his head.
A real Aussie legend who got the job done and was tough as nails.

Choice words from one of the classiest and gutsiest distance swimmers of all time.

Carew once mentioned he was shocked at the levels of yardage US distance swimmers did. Sadly many coaches here still give their distance corps 20k or even 25k a day. Why go say 100×100 on 10 sec rest at 10% lower than race pace vs. 30×100 with 50 sec rest at race pace? With the high intensity/lower yardage training you get faster and more dramatic results.

Very few distance swimmers in the US go 20-25k per day nowadays. Perhaps they do this once in a blue moon, but this is not the norm.

would you please make an article about how to have a relaxed recovery in butterfly plus some drills and dryland exercices in order to improve it (back flexibility), btw I read your articles on “yourswimbook” and I’m pretty fond of ’em they’re great help 🙂