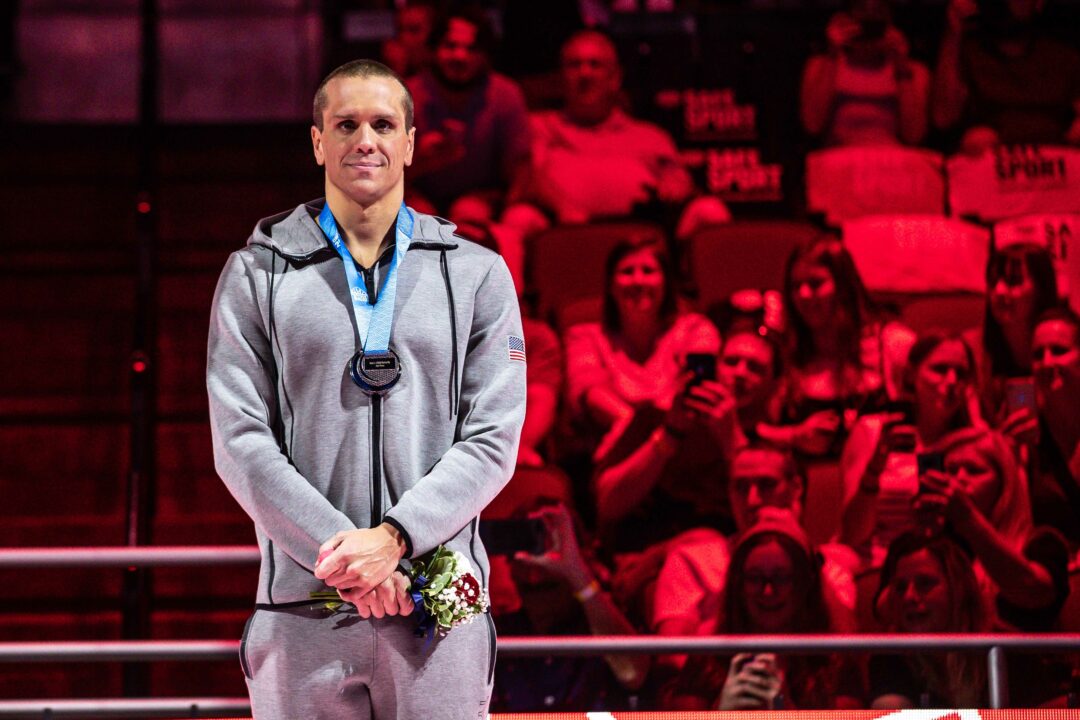 Catch up on the key stories from the FINA World Cup Series stop in Budapest, including hearing what American Tom Shields had to say. Archive photo via Jack Spitser/Spitser Photography

The second stop of the 2021 FINA World Cup Series wrapped up yesterday in Budapest, Hungary, which means we’re already halfway through this year’s circuit.

Swimmers have a week off, as the next FINA World Cup stop of Doha, Qatar kicks off on October 21st, per the official schedule.

With a stacked field on both the women’s and mens’ sides now taking a breather, let’s take a look at some of the hot topics from this past weekend in Budapest.

American Tom Shields appears to be in a very good place both mentally and physically, as the 30-year-old showed his versatility and speed in Budapest.

On the final night alone, Shields cranked out a new American Record in the SCM 50 fly, hitting 21.99 to overtake Caeleb Dressel’s former mark of 22.04 en route to becoming the first-ever man from the nation to be under 22 seconds.

Just about 15 minutes later, however, the seasoned veteran and multi-Olympian also topped the 100m backstroke field. Shields logged a winning effort of 50.50, the 4th fastest time of the man’s prolific career.

On his performances here in Budapest, which also included wins in the 100m and 200m butterfly events, Shields stated, “Man, the US is tough, but this environment is the same… Szabo (Szebasztian) and Milak, they are awesome.

“And I don’t want to take anything away from them but back home I had Michael, then Caeleb and they are pretty good too. But I love racing against people at their best. I love to go against these guys, I’ve done that in my whole life. I’ve never been our top guy, though I still believe I can be some time.”

You can read more about Shields’ American Record here.

After a phenomenal Olympic performance where this 27-year-old became Australia’s most decorated Olympian ever, Emma McKeon is keeping her winning streak alive on this World Cup Series.

Not only did McKeon wrangle up meet titles here across the 50m free, 50m fly and 100m free, the Griffith Univerity star did it in spades, collecting a new World Cup Record in the latter.

Posting a mark of 50.58 on the final night in the 100m free, McKeon tied Sweden’s Sarah Sjostrom’s World Cup Record, also matching her as the world’s second-fastest performer ever in this event.

You can read more about McKeon’s impressive feats here.

Last week we saw 18-year-old South African Matt Sates introduce himself to the world in a big way by establishing World Junior Records across the 200m IM and 200m free.

Here in Budapest, the University of Georgia-bound teen fired off yet another WJR mark on the first night, hitting a mark of 3:37.92. That overtook the previous standard of 3:38.00 Aussie Tommy Neill put on the books last year.

Through the two stops thus far, Sates is remarkably carrying a perfect IM record, winning the 100m/200m/400m both in Berlin and here.

Another man on a mission in this World Cup is Dutch multi-national record holder Arno Kamminga. Kamminga clinched all 3 breaststroke titles in Berlin and nearly repeated the same feat here, just missing out on the 50m breast gold by .03 seconds.

Like McKeon, Kamminga is carrying on his trend of medal wins, having collected the 100m and 200m breaststroke silvers at this summer’s Olympic Games in Tokyo.

32-year-old Maria Ugolkova has made her presence known both in Berlin and Budapest, firing off multiple medal-worthy swims but also notching Swiss national records in the process.

Big congratulations to Tom Shields. Awesome to see him going strong. He is truly a class act

Golden boy/girl is a name you give to a 16 year old prodigy that has never competed in the big stage before. I know of 27 year olds who are mothers so I think it’s strange to call them that

But in all seriousness it’s really not that deep and if you wanted my opinion you could have just asked, instead of resorting to call me slurs 🥱

Kind of weird to lmao about it too

golden woman is more suiting for her

I don’t get why I’m getting so many downvotes, golden boy/girl is something you say to a 16 year old up and coming prodigy. I know of 27 year olds who are old enough to be mothers so the name feels very strange to me

Yeah, and opinions are like….
You should read more books and develop more informed opinions.

These photos look almost entirely like women to me. Where are all the 16 year olds?

Oh really? That’s why the TV show “The Golden Girls” was all 16 year olds right?

It’s a simple use of alliteration. Golden woman, golden boy and golden man obviously don’t have the same ring.

Here’s an article for you about 35 year old golden girl Allyson Felix:

Germany now has a statue of a Golden Angela Merkel on a Golden horse. Angela is scared of dogs & they put her on a horse. Never say Germans do not have a sense of humour.

It ain’t that deep jeez