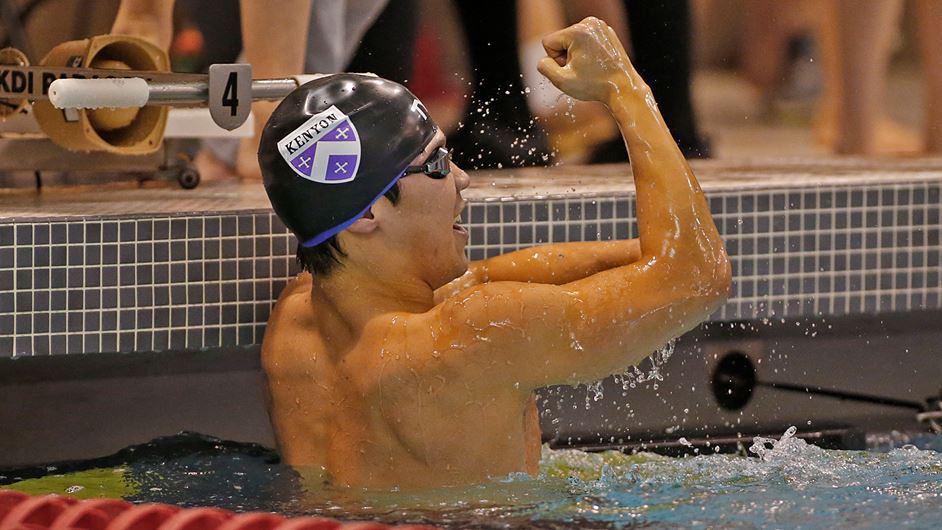 The award recognizes one male senior student-athlete who distinguishes himself throughout his career in several areas including academics and athletics. Archive photo via Kenyon Athletics

The award recognizes one male senior student-athlete who has distinguished himself throughout his collegiate career in the areas of academic achievement, athletics excellence, service and leadership. Each conference institution can nominate a distinguished male student-athlete for the honor. A committee of NCAC administrators and faculty representatives, in conjunction with the conference office, makes the selection.

Hong was one of eight outstanding nominees considered by the selection committee and the presentation of the award made him the fourth Kenyon student-athlete to earn the award since it was first given out at the conclusion of the 2008-09 season.

Hong wrapped up an outstanding collegiate swimming career with his third selection to the NCAA Division III Swimming & Diving Championships in 2022. On the national stage, he helped the Owls to a third-place finish in 2019 and a fifth-place effort this past season, while the 2020 championships were canceled due to the pandemic. In his two NCAA championship appearances, Hong recorded four All-America swims, including an 11th-place finish in the 200-yard freestyle relay with a time of 1:20.61. In conference competition, he was a two-time event champion and five-time All-NCAC honoree. In 2020, Hong set an NCAC record in the 100-yard individual medley (50.27) and still has his name attached to the Kenyon and NCAC records in the 200-yard medley relay (1:27.42).

Hong graduated with a 3.83 cumulative grade point average as a biochemistry major. He was a constant on Kenyon’s Merit List, achieving the honor in every semester during his time in Gambier. He was also a four-time College Swimming Coaches Association of America (CSCAA) Scholar All-American and a three-time NCAC Academic Honor Roll honoree.

Off campus, Hong took on several different roles during a gap year including working as an assistant high school swimming coach at Olmsted Falls during 2020-21, while also volunteering with the Lake Shore Swim Club and tutoring high school algebra for Gideon’s Army, an after-school program that is geared to help youth. In his spare time, Hong also instructed swim lessons.

As a result of his hard work and discipline in the classroom, Hong earned the CanSUR Scholarship for individuals focused on a career in cancer research in 2021; the Pelotonia Scholarship for students with potential to become independent cancer researchers in 2019; and, for the duration of his college studies, the Kenyon STEM Scholarship, funded by the National Science Foundation. Hong was also a recipient of the prestigious NCAA Postgraduate Scholarship in 2022, a $10,000 one-time non-renewable award that he plans to use in continuing his education at The Ohio State University College of Medicine.

The annual award commemorates former Oberlin administrator and coach Don Hunsinger, who had a far-reaching influence on the athletes he coached in a wide variety of sports. Over more than three decades, Hunsinger served Oberlin as athletic director, chairman of the department of physical education, had stints as head coach for Yeoman football, baseball, and men’s and women’s tennis, and assisted with the men’s and women’s basketball programs. Four times he earned NCAC Coach of the Year recognition, twice in men’s tennis and twice in women’s. Hunsinger, who retired from the College in 2008, also served as the NCAC Director of Tennis through 2022.