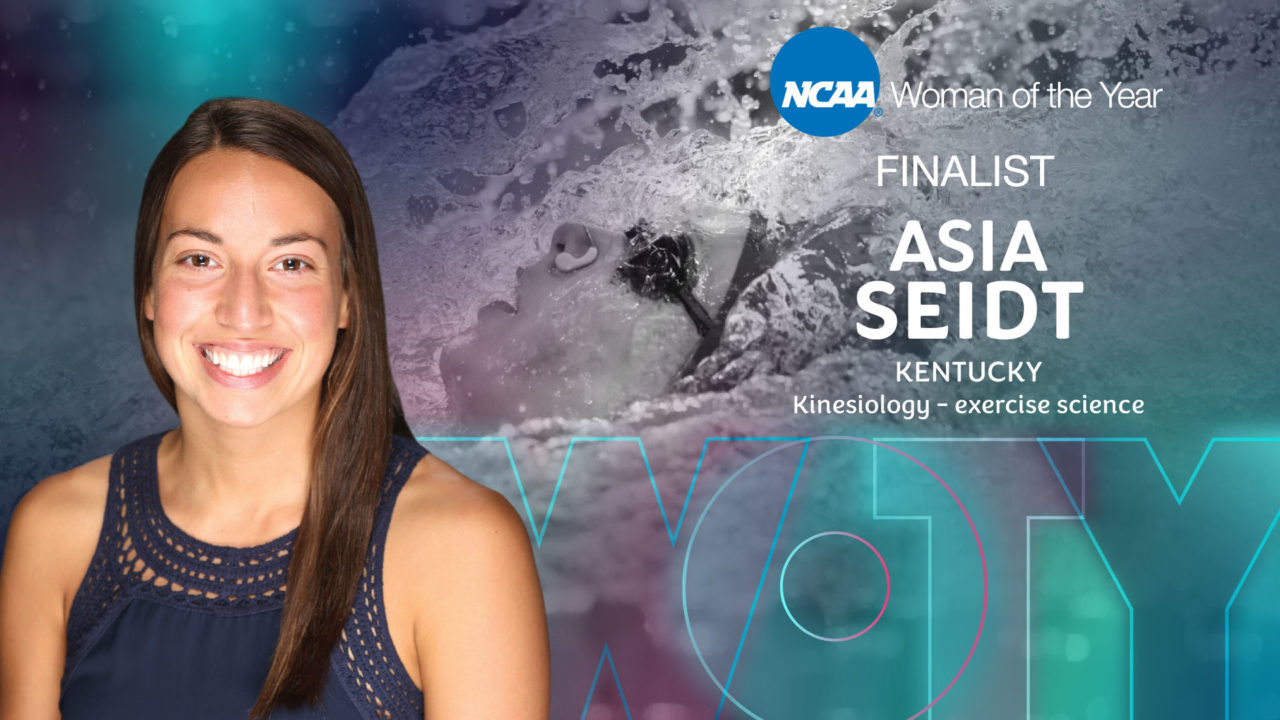 Seidt, a 4-time SEC Champion across the backstroke races and a 21-time CSCAA All-America honoree, has been named one of 9 finalists for the prestigious honor. Current photo via NCAA

Former University of Kentucky swimmer Asia Seidt has been named as a Top 9 Finalist for the NCAA’s Woman of the Year Award.

Finalists were chosen from the Top 30 Woman of the Year honorees, with 3 being chosen from each division to advance to the finals. This list was whittled down from a record 605 nominees of graduating female student-athletes for the award.

Normally, the Top 9 would be invited to Indianapolis, Indiana for an in-person ceremony and day of service. Because of the ongoing coronavirus pandemic, however, this year they will be honored at a virtual awards show on Friday, November 13.

At the 2019 World University Games, representing the United States, she earned a silver medal in the 200 meter backstroke.

Outside of the pool, she was named the 2020 CoSIDA At-Large Academic All-America Female Team Member of the Year after earning first-team honors in 2019 and third-team honors in 2018. In 2019 she received the NCAA Elite 90 Award, presented to the student-athlete with the highest GPA competing at the NCAA Championship finals site for each sport and division.

She earned the 2020 H. Boyd McWhorter Postgraduate Scholar of the Year Award, given to an SEC graduate, and was the 2019 SEC Scholar-Athlete of the Year. Seidt was the 2019 Arthur Ashe Jr. Female Sport Scholar of the Year and was inducted into the University of Kentucky Frank G. Ham Society of Character. Seidt volunteered for three years at Hope Center, a recovery center for alcoholism and substance abuse, and mentored a 10-year-old girl through the Big Brothers Big Sisters program. She also volunteered for four years with Special Olympics Kentucky and was a four-year member of the Emerging Leaders Committee on campus.

In spite of being favored to qualify for at least one final at next year’s Olympic Trials, Seidt retired from swimming after the Olympic Games were postponed until 2021.

Swimmers and divers are named finalists for this award almost every year and have won it 12 times – more than any other sport since the award was first given in 1991. Most recently, that includes MIT swimmer Margaret Guo in 2016.

The 9 finalists represent 9 different sports. In addition to swimming, that includes triathlon, basketball, softball, field hockey, tennis, volleyball, track & field, and rugby. Two honorees play basketball, while one, Mikayla Pivec, participated in both basketball and outdoor track & field, though is better known for her basketball exploits.