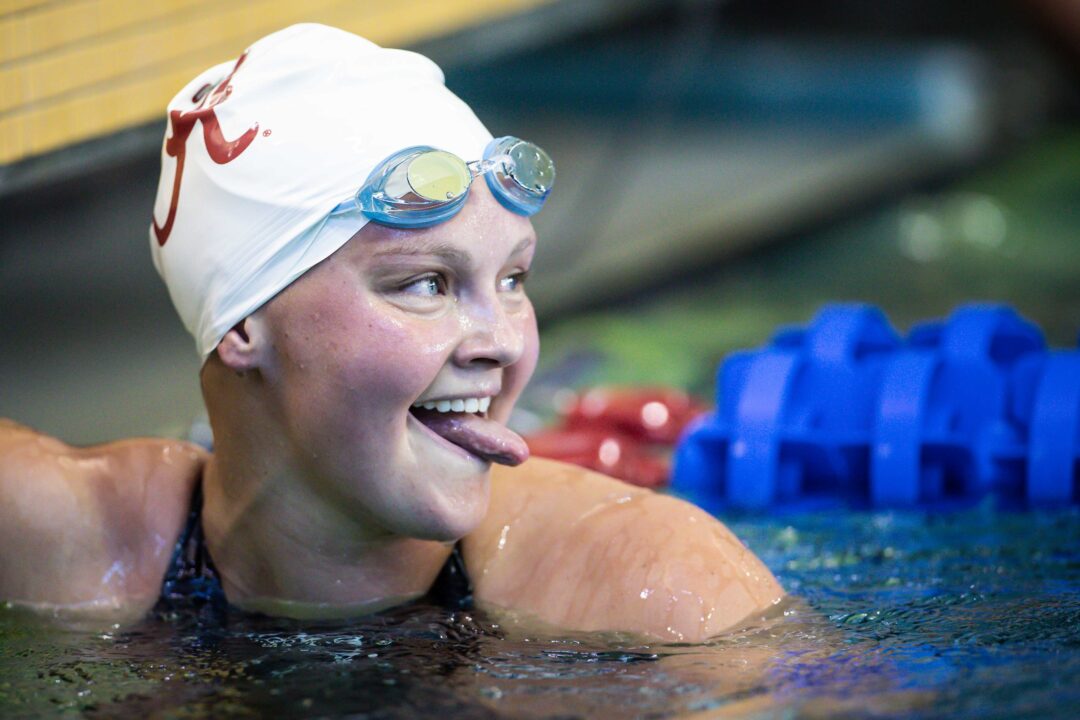 Kensey McMahon, who placed 3rd in the 1650 free at the 2022 NCAA Championship meet, will return to Alabama to use her 5th season of eligibility. Archive photo via Jack Spitser/Spitser Photography

The University of Alabama received another boost this week for their women’s swimming & diving program when All-American Kensey McMahon announced that she would return to the Tide for a 5th year.

McMahon is the second Alabama All-American to announce over the weekend that she would race a 5th season of collegiate swimming: Olympian backstroker Rhyan White announced the same.

That contributed to the team’s 288-point effort that finished 4th at the NCAA Championships in Margo Geer’s breakout first season as a collegiate head coach (or a full-time swim coach of any kind). Alabama went big in her first year, but relied heavily on seniors – that class scored 107 out of the team’s 158 points at NCAAs.

The return of White and McMahon, however, will help carry the team to year 2 of Geer’s tenure, adding another 66 points and White’s two relay legs to the list of returning athletes.

The team will still have some big holes to fill in their roster last season: 32-point sprinter Morgan Scott and 9-point sprinter Kalia Antoniou have not yet announced their intention to return for a 5th year and provided a lot of important relay legs in addition to their individual scoring.

NCAA qualifiers Cat Wright and Morgan Liberto have also not announced their intention to return next season.

Alabama will return a few other key legs next season as well: Cora Dupre, who was 5th at the NCAA Championships in the 50 free and 4th in the 100 free, is a rising senior, and Avery Wiseman is a rising sophomore after a big freshman season that saw her finish 9th at NCAAs in the 100 breaststroke. Alabama also returns three other individual NCAA qualifiers from last year’s championship meet, though none specialize in the events that would help fill in the relay gaps from graduations.

McMahon so far has 7 individual All-America awards in the pool and is a three-time First Team CSCAA Scholar All-America (with the 2022 class yet to be announced). She was the runner-up at the 2022 SEC Championships in the 500 free and 1650 free, which included a new school record of 4:38.34 in the former.

In long course, she made the final of the 1500 free at the 2021 US Olympic Trials, finishing in 8th place. She is a member of the USA Swimming National Team in open water.

McMahon did not compete in the 2022 US International Team Trials, but did compete at the Open Water National Championships, where she finished 8th in the premier 10k event. She is qualified to represent the US at the World Championships this summer in Budapest in the 25km race.

The NCAA issued a waiver that granted all D1 athletes who competed in the 2021-2022 an extra season of collegiate eligibility because of the challenges of the COVID-19 pandemic. In the 2021-2022 season, those 5th year athletes didn’t count against their schools’ scholarship limits, but beginning next season they will.

McMahon graduated in May with a BA in Public Relations and MA in Advertising and Public Relations. She is now pursuing an MS in Sports Hospitality management with a goal of learning more about the business side of sports.

“I’m always looking for ways to get better personally and professionally,” McMahon told SwimSwam. “I’ve grown so much at Alabama these past four years academically and athletically. I have a lot of love for this sport and goals that I’m still chasing so I’m grateful for the support and opportunity to compete with this team for a fifth year!”

Love this! Could the Bama Women finish in the top 4, and take home another team trophy at the NCAA Championships? And/or? Could they win the SEC title? Can’t wait to watch next season!👍👍

If Morgan Scott doesn’t come back, it’s going to be tough to have the relays together for a top four I think. Maybe they flip Rhyan over and use her on some relays – flat start freestyle bests are 24.37/53.03/1:55.20, but obviously she can be better than that.

They want to run it back as a team one more time. It’s not an academic issue

Or both…or more…or?
I have ZERO insight into this, and I’m sure it’s been discussed elsewhere before:

Kensey is a great person. I’m sure she will help Bama next year.

She is a stud with an amazing heart!